I've Seen Gods On Earth And They Are The Almighty Swans 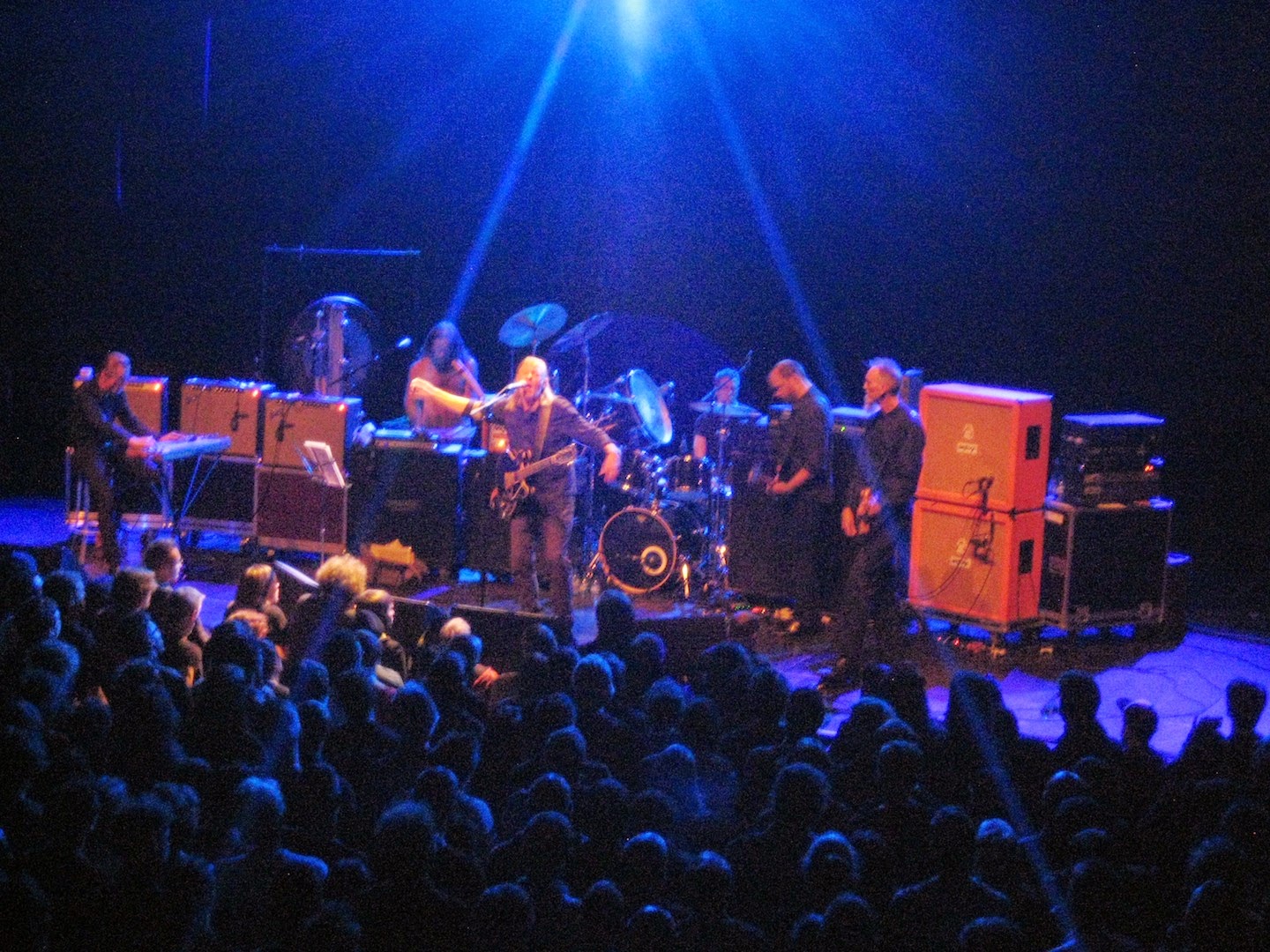 I've seen Gods on Earth and they are the almighty Swans.

Little did I know, when as a teen I bought their red-colored vinyl record of Love Will Tear Us Apart covers (Michael Gira doing singing duties on one side, Jarboe on the other) in my shitty little provincial hometown that one day I would get to see these strange radical New Yorkers -as they were then- play live one day.
Which is why I'm so grateful to all these bands reforming these days and playing live, even if sometimes if makes me feel like my parent's generation deciding to attend a Rolling  Stones concert at some giant arena in 1982.
Not that Swans has anything do to with that sort of things of course, but I'm just happy they're having records of new music out* and that they're touring often. 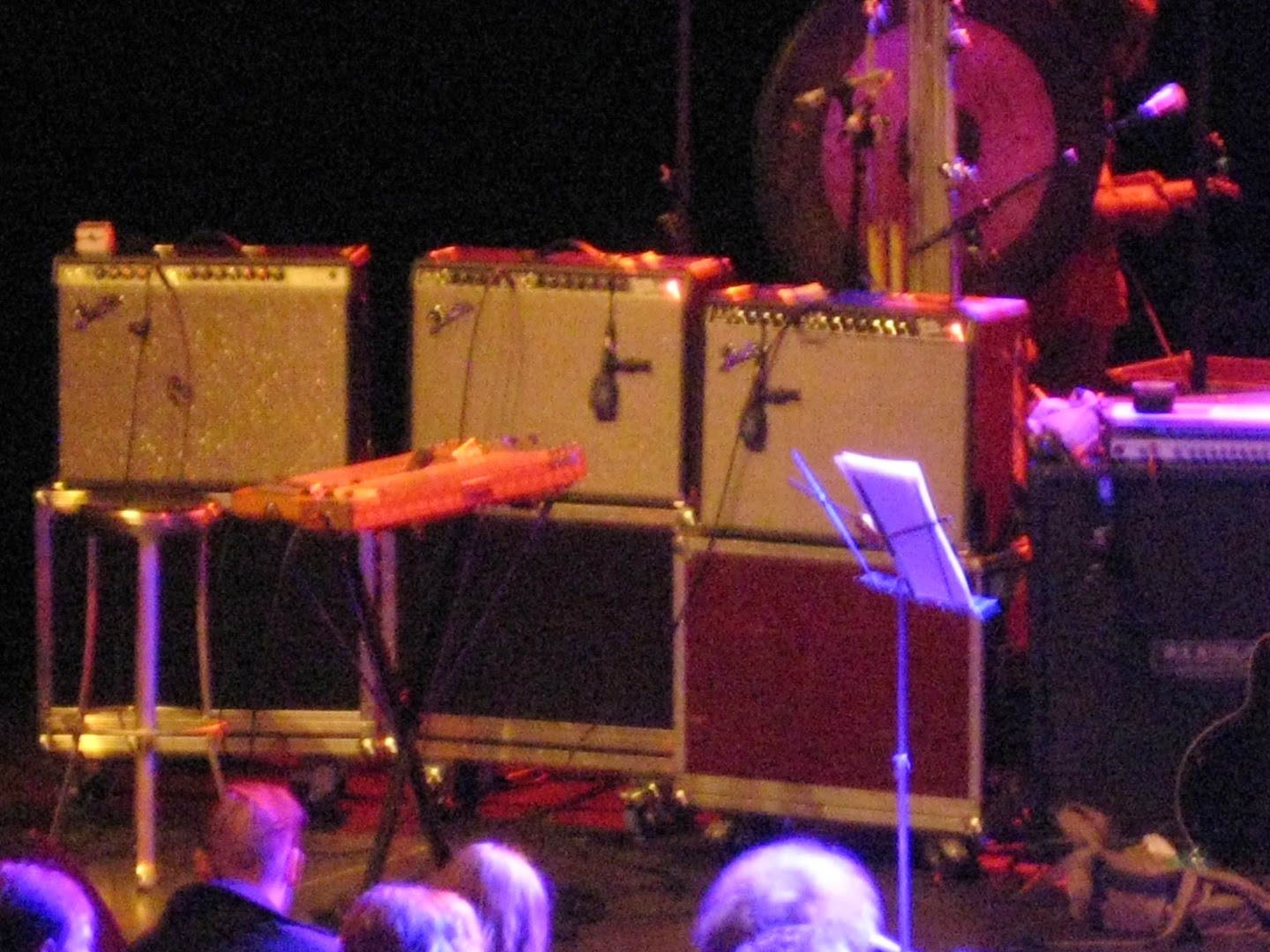 The concert was preceded by a rare public interview with Michael Gira at Huis23, a cosy intimate space above the venue's bar where about 60 of us gathered to see the cowboy-hatted man answer a few questions.
Asked if he did that often he said, "no, it's the very first time and the very last one, too!" It was very short, and the questions were not so interesting  -pro tip: when you interview an artist, musician, writer, filmmaker… ask them about THEIR work and not every other band under the sun- nonetheless Gira gave some interesting answers and also proved himself tremendously funny.

Asked why the band didn't play old material he said that they did that after they reformed a few years ago but that he realized they were "wasting time, and it felt fake somehow" like some sort of old bands reforming to cash in I guess, so he decided to forge ahead with new material.
He spoke a little bit about running his own label and how he decided ultimately to only use if for his own band, which has all to do with current music economics: you all young fuckers downloading the music for free and never buying records, despite a lot of people being interested in what he was putting out (check the link above and buy stuff there!). And that it involved a lot of energy and "I'm not 30 anymore, and I have children and stuff" and so he preferred to focus on his own activities and manage to survive doing that.

He told a funny anecdote about recording with Devendra Banhart and wanting him to focus on a vocal take, and playing some sort of private performance à la Joseph Beuys' Coyote (I Like America And America Likes Me) whereupon he stripped naked and threw a blanket over his head, running around in the studio like a mad man to elicit some sort of reaction from Banhart.
He also answered a lot of questions about other bands (yes in the 1980s he felt more of a kinship with Einstürzende Neubauten than bands like Sonic Youth, no, there's nobody like Swans out there today, etc.)
Also as the host kept on prodding him about "radical bands" and "radical music" and "radicality" [sic] in general in the end he said something like "I'm not sure being radical is really something desirable" (which I take it to mean "for the music's own sake"). There were some interesting bits about working in the studio and starting from mistakes, which every musician worth their salt always talks about. And after 20 minutes it was over, and time to get dinner for me and avoid (thank Lucifer) most of the opening act, Pharmakon. What I caught from her was some incessant wailing over electronic music which… give me back Lydia Lunch or Diamanda Galas, please. Talking about radicalness.


The venue was at capacity and the audience was a mix of middle-aged people who have known Swans for several decades like yours truly, and also much younger people who, despite what you would expect my generation to label them, weren't really hipsters. Thankfully there aren't that many hipsters in Brussels, but even if there were… I don't think they are the enemy.
The gear on stage was stacked in such a way that there was very little room in front for the musicians to move, which must be some quirk from the band because the stage is actually very large. Thor Harris and the drummer (Phil Puelo, Wikipedia tells me) were a little bit behind the stacks. 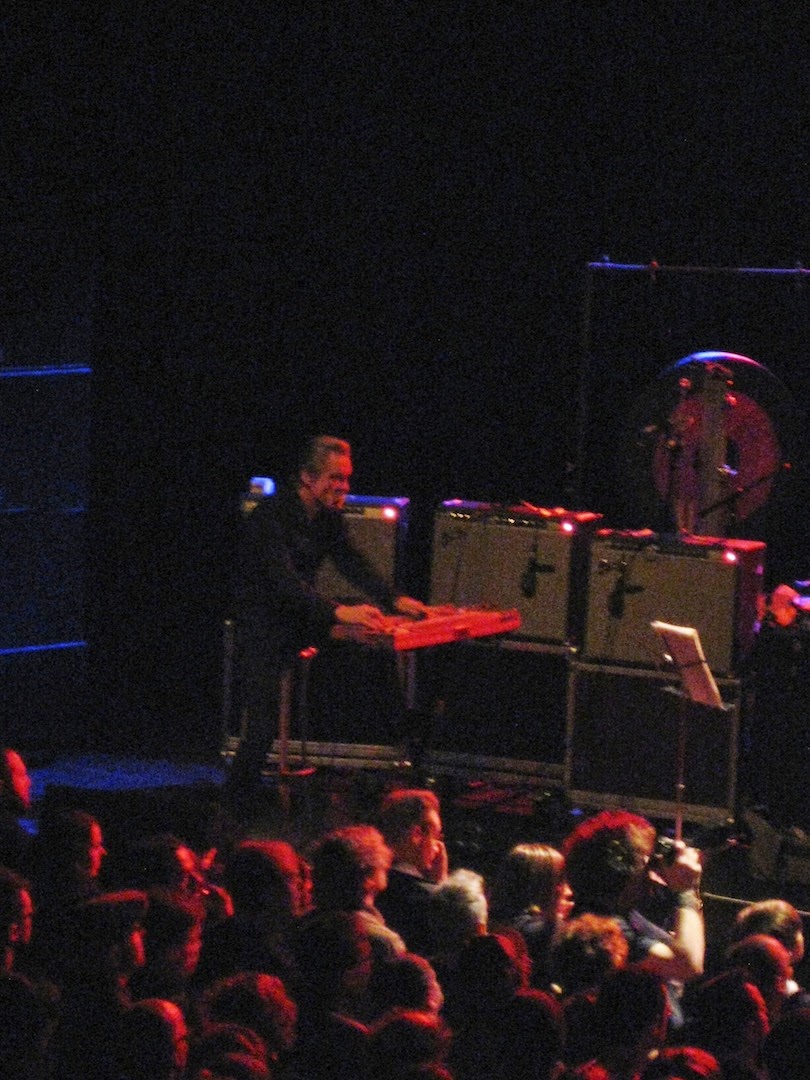 The lights went out at 8.15 PM sharp (they're always on time at Belgian venues) and… the mighty Thor Harris came on stage and started to bang on his gong slowly… and slowly… and slowly… and I thought, uh oh is it going to be some sort of prog-like slow boring something? Then came Christopher Hahn on lap steel guitar (from where I was on the 1st balcony I actually thought it was a synth or some sort of keyboard) and it went on… slowly… and on... then  came Gira and the rest of the band … and so the world exploded.

It's hard to describe a Swans concert and I'm going to fail like everybody else before me, because words are really lame in trying to recapture what is a collective trance-like atmosphere where everybody is enraptured by the music. It's true what everybody else says: it is ear-shatteringly loud. But not much more than a Dan Deacon concert or even a Sparks one. Having been warned by the lovely Barry Schwabsky who saw them recently in the US (hi, Barry!) I had made sure to bring my own earplugs (if you ever go to a concert in Belgium, most venues if not all usually give you free earplugs when you ask at the bar) but I took them off intermittently. The loudness is powerful enough to make the floor and walls vibrate, and all your body as well, which I'm sure must be the scientific reason why everybody is communing so well with the music as the band plays on.
It doesn't however muddies the sound whatsoever, and so you get to really appreciate the use of percussive elements. There is of course a strong "American music" feel to Swans because it is primarily a guitar band (or so you would think), where guitars sculpt drone-like repetitive sound, which comes in great waves crashing out and washing out all over you. 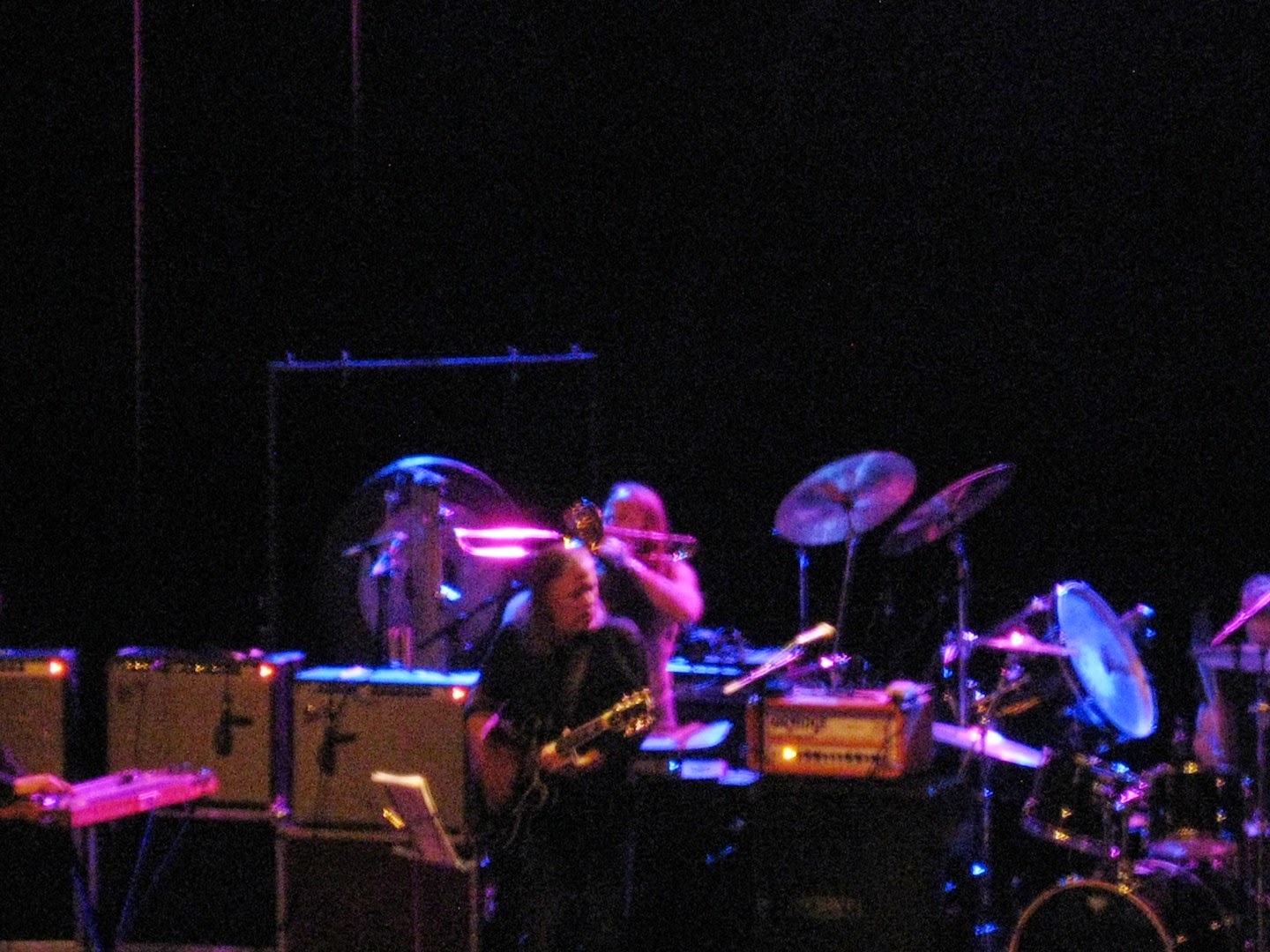 But I think it's only on stage that Thor Harris' importance to the music becomes obvious and you understand what he brings to the band: he's not only a powerful percussionist but a delicate multi-intrumentist as well who plays I think clarinet (I was far…) and some sort of string instrument with a bow, and the trombone. But even when that moment of recognition comes, it is fleeting because witnessing a Swans concert is something that takes you away from "normal" gigs, even if there are some highlights -Thor Harris crashing his great cymbals in synch with Gira jumping on the stage with his guitar, Harris bare-chested playing trombone, Gira and Hahn kinda "jamming" together with Hahn looking like an evil character out of a Lynch movie, which is rather incredible for a seated musician.

It's fleeting because it's music you can't take apart and say, pore over the lyrics, dissociate some chord from another, analyze how it works, what it does, especially what it does as it is impossible to describe. You could say, "the band is tight", "it's a whole" but even this doesn't even begin to describe it. There's a certain perfection of craft, in any craft, when you have a group of people working  in  absolute synch together, and producing something that is more than the sum of its parts, and Swans is that more.  And the audience comes to feel it and be part of this more, too, experiencing something that all religions the world over would be at pain to ever match, because it is a more that is real. Like all great music the sound that comes out of these musicians is almost tactile, but unlike merely good music it can't be reduced to "slow song", "uptempo number", "great hooks" and not only because the music is more drone-like than anything else, because it isn't only drone-like nor repetitive. You can hear it, you can feel it, you can almost touch it. 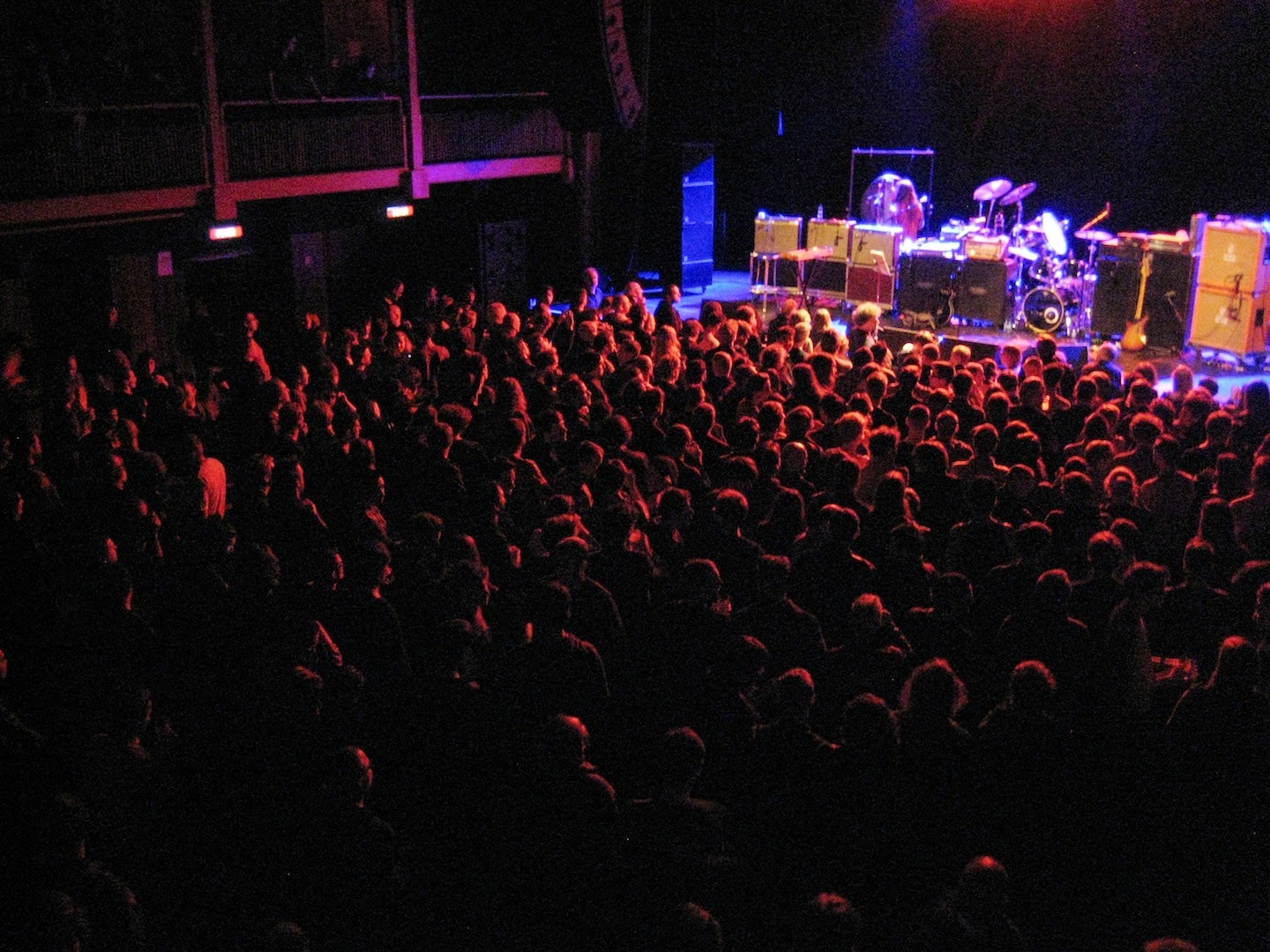 Swans is probably the best live band on the planet right now because it sculpt sounds with an intensity that is unmatched by anybody or anything else, and there is a sort of manic energy that runs through the various songs/tunes/pieces (most from To be Kind plus one I didn't recognize at all that I don't think was on The Seer but, hhhmmm, I think the lucid part of my brain was pretty much gone by then). I tried to record some video snippets at various moments, only snippets because I didn't want to hold my camera throughout when the only thing I wanted to do was be in the moment and enjoy the gig.
Which is a trite way to describe the sort of feeling you have when you are at a Swans concert, aside from saying that as a spectator, you are indeed in the moment. There is nothing before and no mental recognition of what would be an after, you are, indeed, here, now. It's a bit beyond music, that power to make you just be. Now.

And it also makes you think, once the lights come on again, and the band has left the stage, and the rumble of hundreds of feet and bodies moving to reach the exits reaches you -nobody talked much after, really- it does make you think that there is nothing, absolutely nothing in the visual arts that can ever match this intensity. Nothing. 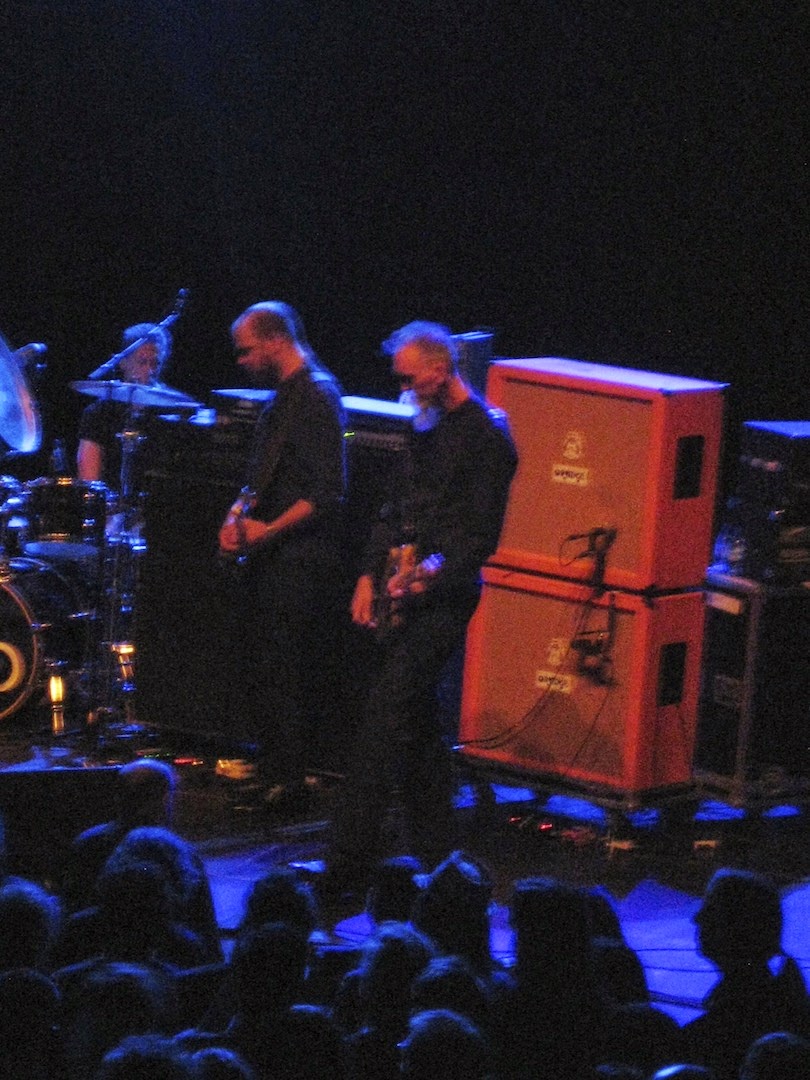 * Filth is being reissued on vinyl next month, if anybody reading this loves me and has some spare $, you know what I want for Christmas.