This Was So Not Happening - Kaprow at the Geffen 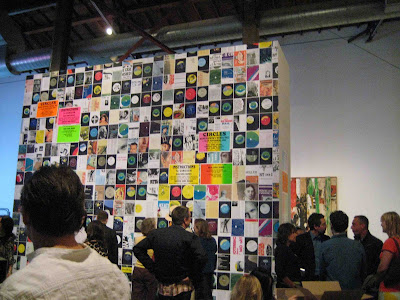 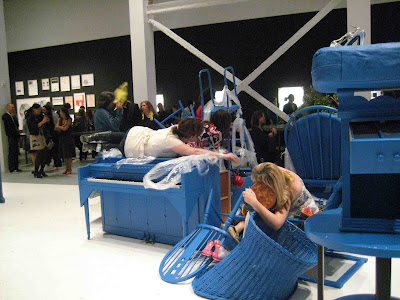 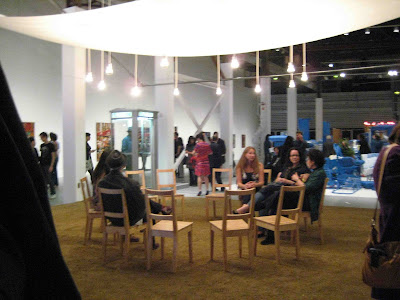 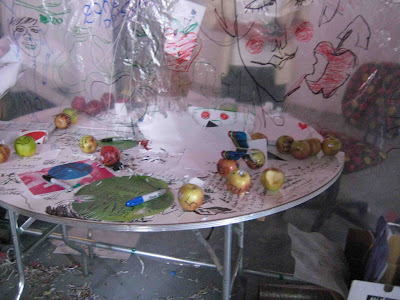 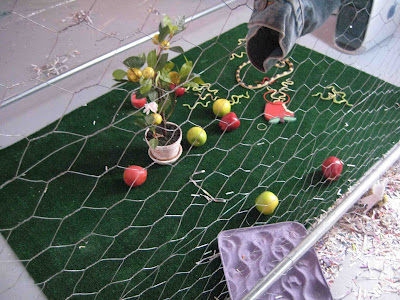 Last weekend I continued my lucky streak of hitching rides to art events and ended up at the MoCA Allan Kaprow public opening. The evening had started greatly, with dinner with friends in Silverlake. Great company, great conversation, good food, everything that put me in a great mood and eager to see what MoCA was going to do out of Kaprow.
Disclaimer: I am not a Kaprow specialist whatsoever. I did teach a class or two on Fluxus in the past, have seen some Kaprow works here and there, know about how seminal he's been not only to performance artists the world over but also as a teacher, especially here in Southern California. But I certainly don't know his work in deep, so I was eager to learn more.
As a matter of fact, a few years ago when Kaprow was still alive and the venerable institution I worked for was scratching its brains to show more Los Angeles/Southern California-based artists in its program (because, there's a shortage of good artists in the region, right?); I did suggest to my then-boss to do something with him, maybe even a retrospective as I didn't know whether he already had one or not. The answer I got was a typical "oh his work isn't that good anymore".
It's even more typical he got a big show in Los Angeles after his death. Ah well, the vagaries of curating contemporary art in the US...
[Speaking of which, I'm waiting for the Los Angeles curator who's going to reconcile all sides of the Douglas Huebler Estate and organize a great retrospective. It sounds right Ann Goldstein's alley. Now that would be a public service exhibition. Ann, encore un petit effort!].

So I was all excited to get to the Geffen and see what was being done with Allan Kaprow. In effect, MoCA had asked a few LA artists to re-create/re-interpret some of Kaprow's Happenings. The result was... extremely confusing.
There is a row of early paintings that nobody was looking at, but which are probably going to be the regular audience favorite pieces once they walk in and the cacophony of the opening has died out. The show comes out of Chris Dercon's turf (Dercon was a very hot curator in the 1990s, and now, well...) and from the Van Abbemuseum in Eindhoven, an institution I like most particularly. I suppose that as curated in Europe, in cities far smaller and less spread out than Los Angeles, the concept of having volunteers "reinventing" early happenings was working out rather well, and it probably was possible for the public to go to as many events as possible. But as played out in Los Angeles, it's hard to grasp what really is at stakes.

For one thing it is hard to comprehend, when you walk into the Geffen, that a bunch of events are being re-created elsewhere in the city. The museum's website is more practical and I'd recommend you have a look before you hop to Little Tokyo.
The other thing is the way the show is laid out, the retrospective aspect isn't overtly obvious. I remember walking out with some art people and discussing how the whole thing seemed totally disrespectful of Kaprow's memory, amateurishly mounted and not historically explicative.
There is certainly a paradox in wanting to see wall labels and elaborate didactics to explain the whats and the whys of an artist whose work was experimental, collaborative and free, but as is the show is not understandable for a lay person. The general feeling was repeated over and over by every single person I ran into that evening "This is so not happening". I must have heard it a dozen times, and joke aside it rang totally true.

There was a series of "early Environments reinterpreted by artists John Baldessari and Skylar Haskard, Allen Ruppersberg, and Barbara T. Smith; projects by artists Paul McCarthy and Suzanne Lacy with Peter Kirby and Michael Rotundi" in the main exhibition space.
Some volunteers were wearing cling wrap film while moving around blue furniture, and I'm saddened to report no one really looked at them, and they looked like they had no ideas what they were doing. Someone was calling or pretending to call from an phone booth, people were typing stuff on typewriter, or writing on apples (I did that too). There were some B&W projections on the wall of historical documents, but they were lost in the general chaos. There was a sentiment of utter confusion, everyone looked dead serious, and the result of audience participation gave, hmmm, somewhat boring results.

It's the same type of thing that happened when Nicolas Bourriaud resurrected participative art in the 1990s under the theoretically weak banner of "relational aesthetics". Basically, you just have to quote Beuys on "Everyone is an artist", and you look at the results. In the 21st Century, it gives us Web 2.0, with high, half-naked kids babbling on Myspace, error-ridden Web encyclopedias written by just anybody ("Hi! I'm Just Anybody Without Credentials and I'm going to give you the lowdown on Fractals! My sources are this great little leaflet published by the Church of Scientology in 1963, and my cousin's explanations. He's taking AP math classes at Levittown High!"), and YouTube entry after YouTube entry of terrible musicians, singers and actors persuaded they're going to change the world. Or find success, whichever comes first.

Yes, everyone can participate and make art, but is it good? Can good art result from self-expression? Does self-expression have a resounding impact and meaning for the viewer or spectator? Can it be not boring?
Most people, given the chance to express themselves, alas reveal a great poverty of thoughts and reflections. The messages on those apples ranged from the sweet but banal "I love you" to the boring and banal "it sucks". So public participation didn't yield fascinating results. Not speaking about that part of the audience that doesn't want to participate. It's surprisingly large.
The results seem a bit mitigated. I have no doubts the volunteers on Saturday had a great time trying to "reinvent" happenings and events, but to look at it felt sad and depressing. A few people I met who are involved in future re-creations even expressed their frustration at how un-historically conceived the whole thing was, and also at being asked to volunteer. A tiny fee would have been a nice gesture in expressing the institutions gratitude for what is, in essence, free work performed by the people, some of whom are professional artists and as such deserve to make a living.

My fellow opening-goers (most of them artists, with yours truly, one foodie IT person and one gallery person being the exceptions) and I concurred on how not interesting the event was, and we were somewhat remembering the heydays of Rirkrit Tiravanija's fame, when he was cooking curry at his openings, and the day after all the regular audience got to see was smelly, crusty leftover. There was no after party for the unlucky, paying public, just a sense of having been robbed of whatever had happened the evening (or several days or weeks) before. The other topics of discussions were about how the same LA institutions (MoCA, LACMA, the Getty) that asked local artists to volunteer or reinvent the Kaprow happenings wouldn't be caught dead asking the same people to show their own work within their walls. And how lacking in imagination the same institutions are, all asking contemporary artists to curate/interpret/design/showcase older art, as if it was always fitting. Your truly has curated one show like this in the past, and collaborated on another one along the same lines, so I'm guilty as everyone else who's doing it now.
But I think to do so legitimately and successfully you have to sit down and think about it and try very hard to match relevant artists who have stuff to say about the others' work. I don't see much sense in sending a "general appeal to the community" about reinventing an artist's work, especially when the artist isn't here anymore to give a few directions, express his approval or his displeasure at how things are conducted. And given what we've seen last Saturday, I doubt any of us was willing to attend any other Happening "reinvented".

So to conclude our evening, we went out sagely to a famous FroYo outpost (no, the other one) and had a great discussion about post-punk rock roller derbies, food, mink skeletons hanging from trees in Canadian forests, food, freak shows and cabaret acts in Silverlake, food, and owls severing pigeons wings in the California High Desert. And food. All in all, a conversation Kaprow might have enjoyed.
Posted by Frenchy but Chic! at 2:26 PM