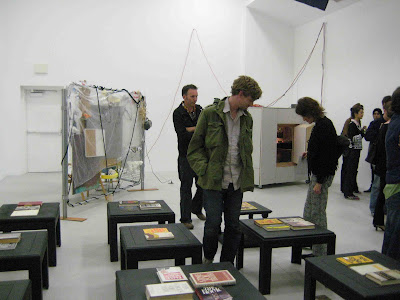 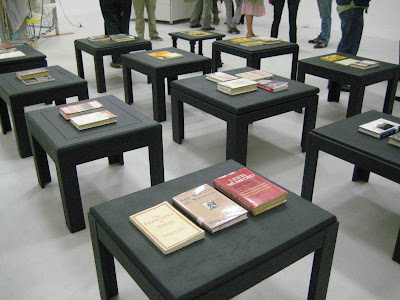 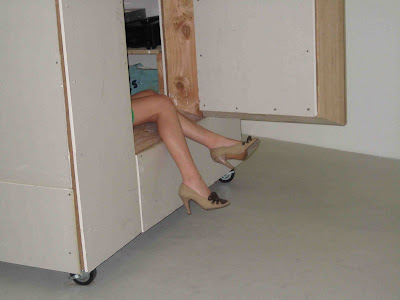 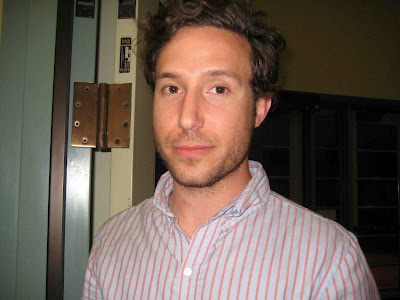 Being without a car in Los Angeles is not only very unpractical, but also extremely time-consuming. Whatever takes 20 to 30 min at best usually can take up to 3 hours when you have to rely on the MTA. Of course going to see shows is even more complicated, so my Frenchy self has failed to see the Kara Walker show and totally missed the Michael Asher show. It's closing in 2 weeks so hopefully I'll get to see it before. I don't even know what's going on at Redcat.

But thankfully FBC! has quite a few art-oriented friends, so I hitched a ride on a couple of magic carpets last weekend to attend the great show curated by Aram Moshayedi at the Glendale College Gallery. The GCG is managed, curated and programmed by Roger Dickes, who entirely renovated the space 3 years ago, and managed on a shoestring to create a great hub for LA artists. His yearly budget is so low it's a miracle he has succeeded in programing such good shows, and basically started from scratch an exhibition space that routinely attracts a great audience, despite some handicaps. Such as: being in Glendale, away from the LA art world center of gravity, and having openings receptions on Fridays, right when traffic is horrendous. Let's hope upcoming budget issues won't kill in the bud such a great space, which provides a non-commercial showcase to many young artists and guest curators.

So last Friday I went there with my friend the Australian artist Ian Haig, who's currently in residency at 18th Street and kindly offered to be my magic, flying carpet. We got lost a few times en route, thanks to that thing. I was very excited to see the very first show curated by Aram, whom you may know as the friendly assistant curator at LAXart. The show is called The Silence Of Infinite Space, I suppose after Blaise Pascal's quote "Le silence éternel de ces espaces infinis m'effraie". I'm not going to extrapolate on Aram's supposed Jansenism, but rather expand on his exhibition, and the great job he did from filling that silence. There's nothing to be really afraid of.

Ian and I were really enthusiastic about the show, for several reasons. Ian was relieved that there wasn't any painting on view, as it is shocking for an international visitor to witness how much mediocre pictorial activity there is on display in Los Angeles art spaces on any given day. I've written enough here about generic figurative or abstract painting for you to know how I loathe it. So it was good to see mostly installation and sculpture.
In addition, the show was very well installed, a skill that is sufficiently rare enough amongst curators to be noted here. I was also very impressed because Aram told me it was his very first exhibition, and he did really well.
Group shows are not always easy, as you have to pick up a strong line-up of artists, and get good artworks from each of them without any artist upstaging all the others, it has to be coherent intellectually and visually, be intelligent and if possible not too dry* and most importantly look good. That's where many, many exhibitions usually fail, by lack of that special visual kick that makes you feel like it's happening, hic et nunc, and not promising some kind of future intellectual fulfillment though means of textual by-products.
On all these points Aram scored, which means he's probably destined to become a kick ass curator. Of course he picked up very good, solid artists, many of them well-known locally and nationally (Skylar Haskard, Justin Beal, Jedediah Caesar) though the work that gave me the biggest kick was Shana Lutker ** whose post-conceptual installation had a very 1990s, elegant look while being really, really fun (you had to look at all the book titles to see it). Haskard's worked well because of its placement, though I am not sure the work would be so strong presented elsewhere.
The mobile unit was the type of "relational aesthetic"-oriented work (Nicolas Bourriaud, oh I wish you had chosen a less ugly brand name for your theoretical brainchild) that functions well, and everyone loved it. It provided a focal point without being overwhelming, despite its size, and brought loads of fun all around.

I spoke earlier about how Aram used the space so well, and in my mind I contrasted it with my recent visit at the New Museum in NYC (more on this in future post) . With all due respect to the different sizes of the shows, I compared the way both were installed. Both shows were object/sculpture/installation/new media-oriented, and both were staged on open floor spaces without that much wall surface, something always difficult to master. Both shows were aiming to say something about a type of current art that is somewhat (at least in certain respect) less market-focused than most recent paintings, while showing youngish but already recognized artists. Most of them recent UCLA MFA recipients, and/or showing at my favorite gallery in Culver City (Hi Susanne!), living in Los Angeles.

Of course the New Museum's exhibition space is a bitch (more on that in another post) while the Glendale Gallery's is lovely, but the New Museum show curators did a very poor job of using it intelligently, of picking up artists and artworks wisely and displaying them in a way that a) made sense and b) didn't make each artwork conflict with the others. I've rarely seen a show that was as poorly installed as Unmonumental, and God knows how many Documentas, Biennials, Art Fairs and Pompidou Center exhibitions I've seen. Only academics suck as much when they install exhibitions.

To sum it up, I came out of Aram's show very excited, and elated. Because, believe it or not it's one of the best group shows I've seen in a very, very long time. Good works, good artists, great installation, the feeling that the show would look just as good on the days after the opening, and that the show was alive. Hm, the metaphysical aspect (see Pascal quote above) wasn't particularly obvious, but FBC! doesn't really care, having outgrown a sense for metaphysics in my early tweens.
So long live Aram Moshayedi, and if the New Museum people try to hire you, show them how to curate good exhibitions. Because they don't know how.


PS: for the socially inclined, a list of the people there: artists Nancy Popp and Susan Stilton, Fette from Fette Gallery, of The Flog fame with her husband, Lauri Firstenberg and Peter Zeller, Peter Kim, and Nancy Meyer from Michael Kohn Gallery.

*FBC! must confess a deep appreciation for conceptual, post-conceptual, dry, smart artworks and exhibitions. But because FBC! is human, I can also recognize the need for a bit of pizazz here and there...
** She shows at Susanne Vielmetter in May. So, yes, another artist from her stable I really like. I've said a few times it was one of the best galleries in LA, and I'm not afraid to repeat it.
Posted by Frenchy but Chic! at 4:05 PM