US Political Scandals Are So Much Fun! 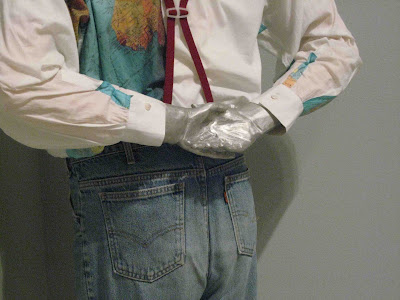 It's been a while! FBC! is back from NYC where I've been to the Whitney, MoMa, the Met, the New Museum, Chelsea, and most importantly at Joel Robuchon. So the next few posts will be about art, food, and other stuff.
Meanwhile, loads of stuff happened! For instance, someone was killed by an arrow in Lancaster, something unbelievable that recalls to mind a similar crime in London in the 1990s I believe, when a woman was killed by someone using an arbalet. Sounds like story fodder for our writer friends.
Also you American people got a new funny political sex scandal! Pretty risible compared to what happens in France, you know.
I'm totally befuddled with US politics, I must say. The Dems fighting each others in their primaries campaign, instead of, I don't know, outlining clearly their plans for universal healthcare, fighting recession, joining the Kyoto protocol, pulling out of Irak, general foreign policy, and their respective plans for governance.
I also think any candidate refusing the possibility of being on a common ticket for the general election is suicidal for the Democratic Party at large. Whoever wins these fratricidal primaries would better get a solid, strong and VERY CHARISMATIC person for the VP slot. Just sayin'.
I think you guys (and I, by ricochet) are going to get John McCain as next Prez. If I'm right (and I sure hope I'm not) I've seen the future and it's damn ugly.
If the country and the rest of the world are heading for a full-blown recession, we're going to need compassionate social reforms and federal help for the poor, since most of us are going to be just that.

Anyway, on to your funny scandal! I understand getting a moral crusader caught in a prostitution scandal sounds like poetic justice to many journalists, Republicans, Wall Street white collar crooks, and Christian Evangelists. After all, it usually happens to them! You see, me, I'd love for some people to have their own car stolen, or be sued, or be in painful but non-disabling car accidents (there's a limit to my Schadenfreunde). That kind of stuff.
Though, as my delightful friend said, next time it happens it would be great if: a)humiliated political wife were to have her own press conference to say: "he's an a..hole and I'm kicking him out of the house!" and: b) if common press conference, said humiliated political wife wouldn't stand behind the male political corpse. Being humiliated once is enough!

But, hm, as far as scandal goes, it's not biggie, you know, compared to French stuff. A French Rep. would spend public money to visit his poules de luxe, not his own! And wouldn't be caught dead with just one and the same rental lady, it's so lame, so petit-bourgeois, when you can stage your own orgies and swinger parties! Keep your mistress and love child housed in palatial properties belonging to the government! Cheat on your wife for years with many, many women, stage a tearful facade when she divorces you, and then remarry a former model turned boring chanteuse with a bad facelift 3 months later! We also had a late 19th Century French president dying suddenly while shagging his mistress at the Elysee (no less!), and another one who was innocently climbing trees and jumping off moving trains (his sex scandals are less funny).

Anyway, if you ask me, the Clinton-Lewinsky thingy was also not a big deal (impeached for that???). Now if McCain and Romney (sounds a bit like Laurel and Hardy to me, or maybe the Two Stooges?) were to be caught in each other arms in a dungeon, now that would be fun!

The picture is a detail of Martin Kippenberger, Martin Go In A Corner And Shame On You, 1989, at MoMA. Feel free to reproduce but please link to FBC!
Posted by Frenchy but Chic! at 2:10 PM

Email ThisBlogThis!Share to TwitterShare to FacebookShare to Pinterest
Labels: US Politics Are Fun