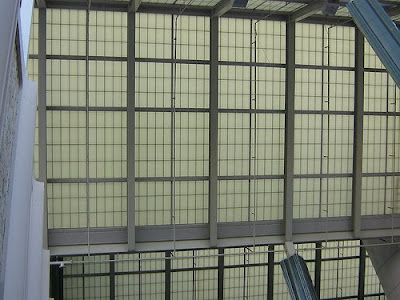 UPDATE!!!!! I posted this on April 1st, thinking everybody would see the joke...But no! I got some emails commenting on the post, etc. So it worked and I had my fun, but to answer some email questions I have received: I haven't the foggiest idea what Michael Govan is up to!
This being said, pre-April Fools Day this item was published... I saw it after posting mine.

Every 2 years at the same period, there seems to be some new rumors about museum directors leaving, arriving, "being resigned" and so forth. It's so ritual it is starting to look like a Pagan renewal rite. Gossip goes exponential, rumors fly, stuff is being whispered, hopes rise and expectations are being crushed. Earlier this year we heard about Philippe de Montebello retiring from the Met (my money is on Neil McGregor), there's been the swap at the Walker, etc, etc. You'd think in LA we would be safe, since we've underwent that directors dance not so long ago.
So I was flabbergasted this weekend when I heard rumors that LACMA's director was starting to get tired of itt all. What??? The guy's only been here 2 years, got the most massive media exposure this side of Britney Spears and already wants to leave? I found it hard to believe (and still do, frankly), but my dinner companions seemed to have it on high authority. No names were given (actually they were, but I was to far from the people talking to really make sense of what I was hearing), but it apparently went that way: one local gallery owner got it at the Whitney Biennial opening from one of his NYC collector who himself heard it from one of the museum trustees.
It seems Govan is disillusioned with the dearth of generous benefactors and donors in Los Angeles, and the very low level of fundraising possible here. In addition the sartorial provincialism of the trustees is kind of grinding, and he finds it hard at the museum galas when he stands out in his Dior Homme suits and cowboy boots among the tuxedo-clads penguins (just kidding, that one I just made up!).

But seriously he's been really impaired in his quest to redo the entire LACMA campus by his inability to raise money locally. Like, the Wunderkind has lost his mojo, once transplanted in the LA desert. So the word is he's gonna try to drag it for another year and see if he can get some Back East Serious Money to invest in Poor Auntie Fairfax-Wilshire. The plan is to have some serious party here in February when they freeze their asses on 5th Avenue, show them the potential to have their very own buildings (Your Name Here!) under the palm trees (hey, much better than dedicate MoMA's men's restrooms!), entertain them at some Oscar party with some C-celebrities in attendance, and if all of this fails, then he will go back to NYC where at least donors know who Jeff Wall is and that "dialectics" is not a dirty word.
The lack-of-fundraising opportunities doesn't surprise me, nor the homesickness (at least in NYC there's no earthquakes, fires, mudslides, and you don't spend 5 hours a day stuck in traffic). But the calling it quits so early, I find it weird, and I voiced my puzzlement in between the weak jokes (such as "well, he was really hoping to move in a Neutra or even a Koenig house, but all he got was a mock-Tudor").
To which one side of the table answered something along the lines of " well, now that Thomas Krens is stepping aside, there's a golden opportunity to lead a museum in need of a major rejuvenation, housed in a 20th Century's architectural landmark. And Govan really digs modern architecture".
Ah. Not unrealistic, if still surprising.
Anyway, I'm awaiting developments, as I still find it very hard to believe. Stay tuned!


Photo courtesy of Donna Grayson.
Posted by Frenchy but Chic! at 11:22 PM