Let me get this out of the way first: I am not a Jesus & Mary Chain lifelong fan. I really adored Psychocandy when it came out, not so much Darklands, so after my mid-to-late teens I totally forgot about them. I occasionally listen to Psychocandy and always with great pleasure - this must be one of the greatest albums ever made, but I never really paid attention to the band after that, with the exception of their covers of Who Do You Love and Surfing USA. I had always been told they tended to be crap onstage and have a mighty attitude, but I never really cared, to the point I didn't even know the name of the brothers (Jim and William Reid) who ARE the J&MC.  Plus, I usually totally suck at music trivia, so there you are. I was actually living in LA when they had that 1998 concert where they broke up on stage, but I didn't know they were playing at the time, and I'm not sure I'd have gone anyway.

Fast-forward to a few weeks back, an acquaintance  posted on Facebook about a concert at the Hollywood Park racetrack. It was intriguing enough - weird venue, had they sunk so low they couldn't get gigs elsewhere, how strange some promoter would think it's an adequate venue  for them, etc, etc, but but but what really made me want to go was the promise of a low entrance fee: $10. Plus, I had never been at a horse race before, so it sounded like tons of fun, and if the concert ended up being shit, well, what's the risk with losing $10?

So, with a few friends on Friday we dutifully made it at 8 PM for cheap drinks, cheap hot dogs (little did we know they had "gourmet food trucks") , horse racing and at the end, J&MC. Some people in my party had seen the band back in the day and related "they played with their back to the audience", "they played for 20 minutes, had a fight, left the stage and that was it",  which, to me, sounded like tons of fun. I'm always up for experiences that can morph into really fun stories a decade or two later.  We started with crap drinks, very good pulled pork sandwiches and later on churros at the food trucks, tried to figure out that horse racing thing gambling protocol (man, it's complicated), got very excited during the races, and of course lost our bets. 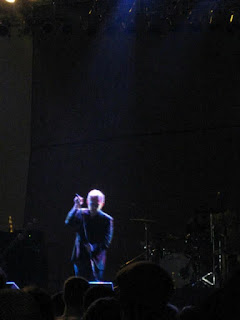 
As a side note, I have to say the racetrack owners did a fantastic job of making us spend money, between the really bad drinks at the various bars (seriously folks, if you go there, stick to beer), betting on horses with zero chance of making money (we had no idea what we were doing, hence we ended up erroneously betting on races in *Australia* and at some other racetrack in California) and of course the entrance fee ($10) and parking fee ($5). I'm not sure they'll manage to hook up them hipsters in regularly gambling on horses, but as a Summer entertainment option, it sure was fun!
Two hours and a half went in a jiffy, and then it was time to see Jesus and Mary Chain.

The crowd was really cool, very "California Gothic", with a few people still celebrating the LA Kings Stanley Cup win, with a ridiculous inflatable trophy they were shaking over their head all night long. One friend found it annoying (hi Juan!) but it totally cracked me up, as a "only in LA" type of thing. I was more annoyed at the youngster guy who spent 1 hour 30 jumping up and down in front of me - dude, if you want to mosh, go to the mosh pit in the front, or please dance, jumping is, ah, so ridiculous. But congratulations for the stamina! Another odd moment was someone passing on two trays full of cupcakes to the crowd? "I want some candy, give me some candy, give me some", maybe?

The band was on stage promptly at 10.30 PM, no waiting whatsoever, with Jim Reid exclaiming in a really lovely, charming Scottish accent "Bloody hell! This is weird, isn't it?" (I'm paraphrasing). He looked very trim and more relaxed than I had expected, with far less hair than, er, in 1985, while William Reid still has tons of hair but clearly needs to jump on the wagon soon, poor man. I couldn't really see the other dudes, what with the twat jumping up and down in front of me.
They seemed to be doing a very professional job, that's all I can say. 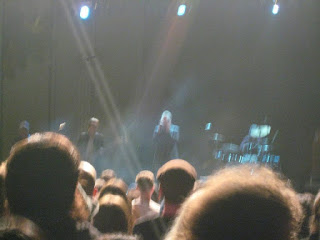 
They started with, er, a song I didn't know (snake something?), but as an opener it was a clear indication that the show was going to be GOOD.  Not being a die-hard fan, I cannot really say what they were playing but a bunch from Psychocandy, they did Sidewalking, I Hate Rock'n'Roll, and right before the encore an extraordinarily intense version of Reverence.
There were a few false starts with something I've never seen before, a band stopping and then starting over the same song three times to get it right. Which is the part I really enjoyed because it made them human, and I also like that they'd rather start over several times and do it right than just botch it up once.
The banter between the songs was also very enjoyable, not least because of Jim Reid's lovely accent, but also because it was so unexpected. You know, shoegaze band and all that... Lots of "fuck" and "bloody something or other", but also self-deprecating jokes ("know of a good rehearsal space?", "does anybody know our songs here? because we don't", and "BTW, Jim says we played like shit tonight"- William Reid toward the end). One thing was certain, it was very, very LOUD because they managed to blot out the sound of the airplanes taking off and landing at nearby LAX, and my ears kept on ringing three days later.

After the concert I kept on reading some reviews saying how terrible they had been onstage of late, the fact is, they weren't terrible at all in Los Angeles last Friday, far from it.
Apparently they had tons of problems in San Francisco the night before, but at the racetrack they did really well. Especially if you take into consideration it was an outdoor concert and you'd expect the mix to be shite, it wasn't at all. Jim Reid's voice came out super clearly and not drowned at all by the music. Lovely fuzzy feedback as expected, but the thing that really, really won me over was Jim Reid's lovely voice,  the fact that the man can truly sing.
I have no idea if he's using Autotune - my gut feeling is he wasn't, but what do I know? This is one of the loveliest singing voices I've heard at a gig in ages. This is the voice of someone who could easily churn out records of 1950s crooner covers and get away with it. This is the voice of someone who should be offered the means to record a nice solo album. This is a voice of someone who I hope is taking care of his liver, because he should keep on singing for as long as possible.

Up until Reverence I thought it was a very good band onstage, false starts and all. And when they did Reverence, then I understood at what level the Jesus and Mary Chain can really play if they get warmed up enough. It was... intense, magical, beyond anything else, really. It took them some time to get there, but boy, was it worth it.
Just that one song made me decide to go and explore their back catalogue, which I've been happily doing ever since. Just  that one song justified spending $10 to see one of the greatest bands ever playing at a seedy California racetrack. Even if they had only made Psychocandy it still would be one of the greatest bands, ever (because, you know, the Velvet Underground only made VU & Nico and White Light, White Heat, the rest is sentimental schlock), but they also made Munki (Gawd this is good) and I'm busy exploring all their b-sides and covers right now. Ever heard their cover of My Girl? Try it, because if it's not one of the most amazing covers you've ever heard, well, what can I say? You need to consult an ear doctor. 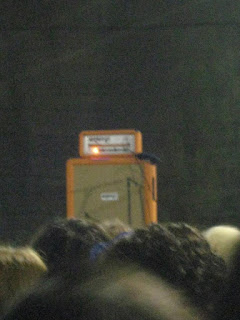 Beautiful stoner amp/speaker
Posted by Frenchy but Chic! at 11:07 AM 2 comments: