It's Thanksgiving holiday, most galleries are closed, and next week they will all be going en force to Miami (for Art Basel, Pulse, etc.) so there's not much going on in Los Angeles until the week after next.

FBC! takes advantage of the hiatus to let you know that rather than go spend the money you don't have on items you don't need on Black Friday, you could make a better use of your time and dough by going to the Hammer Museum today. The Hammer is turning 20, and for the next 20 days the entrance is free, so you can go see the Eva Hesse, Mark Manders, Julian Hober Hoeber and My Barbarian shows, in addition to the selection from the Grunwald Center by Frances Stark (I think it's still up).

Meanwhile, I also want to remind you that Einstürzende Neubauten will be playing 2 dates in Los Angeles next week, at the Music Box in Hollywood on Wednesday and at the Echoplex on Thursday. FBC! will be there, hoping for a great experience. I always heard great things about them on stage, but it will be my first EN concert. 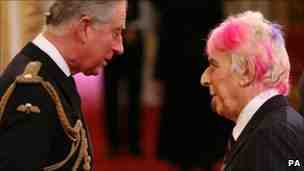 Lastly, congratulations to John Cale, O.B.E, (does that make him the new OBE Wan Kenobi?) who came to pick up his chocolate medal from Prince Charles last week with a tie that matched his hair colors (while, pink and blue).  Cale proves once again he's the real Prince of Wales, as for the medal, some people seem pissed off he accepted it. Me, I think it's pretty cool, maybe he'll be invited to sing Guts at Prince William's wedding, who knows, with Chicken Shit as an encore?
As long as it doesn't distract him from coming up with the new album the world has been waiting for during the last 5 years...

[I don't know where the image of John Cale with Prince Charles comes from, except for the PA watermark. I'll be happy to attribute proper credit if someone directs me to the right source, thanks!].
Posted by Frenchy but Chic! at 12:20 PM