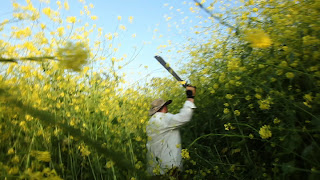 Jeff Cain, El Camino Real, 3 channel video installation, 2011, from the LACE website
While the entire art world and their uncle were cavorting in Europe to network in Venice and witness latter day Capitalism in action in Basel, yours truly was very busy neglecting the blog and meeting deadlines.
Also going to the Harry Partch concert last week at REDCAT, which was immensely enjoyable, capped by the audience being let onstage to see and touch the instruments and talk to the musicians. My friend took pictures, so if he's OK to let me post them here, I'll do it shortly. I also went to a press preview of Miranda July's new movie, The Future, which I didn't enjoy at all* but you might, and I believe it's going to be previewed at MOCA soon.

Meanwhile, what's happening in Los Angeles this weekend, are you asking, faithful readers? Starting tonight, in about 2 hours, LACE presents two exhibitions, Speculative (with FBC! friendly acquaintance Jeff Cain), and Unfinished Paintings, another group show that includes the lovely Mark Dutcher. I can't go to the openings but will make sure to see the show. Starts at 8 PM tonight and the show will be up until August 28.

Saturday will be a busy day in Los Angeles, as in Santa Monica York Chang will show  his work with Second Life at 18th Street, and so will several artists as many events are scheduled for 18th Street Artnight. All information here.

Elsewhere in Los Angeles, if you are near Chinatown don't miss Rosha  Yaghmai at Tom Solomon, if near Culver City there's also an opening at Las Cienegas Projects. On the same evening, FBC! gal pal Nancy Popp will present her work at Kristi Engle, a gallery dangerously situated for me in Highland Park, a stone throw from my all-time favorite record store, Wombleton, whose owners I swear have pledged to make me bankrupt very soon. It's at 8 PM, be there or be square!
While I'm talking about record stores, let me salute the opening of Jacknife Records in Atwater Village. I haven't gone yet, but it's on my list. They don't have a website (yet), so here's their info: 3161 Glendale Boulevard, LA 90039, and they are open Tuesday to Sunday every day from noon to 8 PM, and to 10 PM on Thursday, Friday and Saturday.
Another remarkable store opening, this time downtown, is The Last Bookstore. On Spring street, open every day from 10 AM on, an occasion to browse real life used books, something much better than, uh, getting thumb cramps on your kindle, no?

*it has no story line, the acting is atrocious and it's neither quirky nor intelligent. All it made me want to do throughout is slap July's face and tell her to go see a doctor to get her thyroid checked and stop being such a drama queen. Sheesh, lady, you're not a poor little broken birds so sad on its tree, waiting to be rescued. I thought it was one of those whiny whitey project by people from Portland originally from Williamsburg originally from Iowa. Might appeal to this type of demographic, which I'm not part of.
Posted by Frenchy but Chic! at 6:41 PM