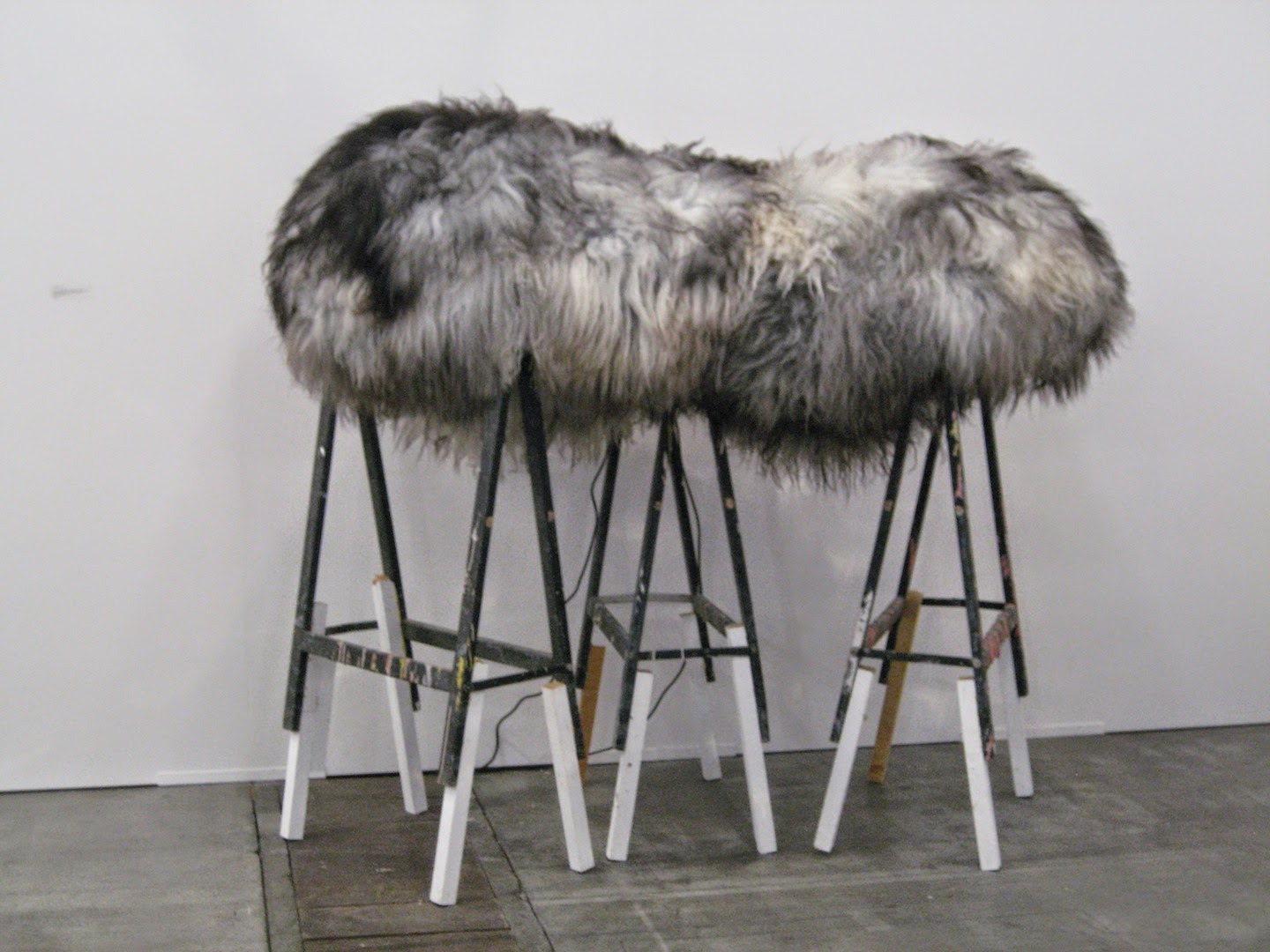 Some furry something by the Chapuisat brothers. I think my cat would have liked it.

Last week was the annual Art Brussels art fair, an event that left me rather dubious, with the disclaimer that all art fairs give me the willies, and also that I was rather wiped out after providing live translation an hour away the day prior to my visit.
I had gone to the art fair last year as well and was rather unimpressed, and would have skipped this year’s if not for friends being in town and wanting me to come visit.  This year was even more underwhelming if that is possible, and I wouldn’t have reported on it if several people in the business hadn’t asked for my opinion, I suppose to test the waters and see if they’d want to apply for future edition.
Most of the galleries represented were Belgian (maybe a 75% ratio?) giving the fair a decidedly local feel; as for the rest it was a hodgepodge of French, German, British, Latin American and a few  galleries from the United States. My feeling about this specific art fair is that it is totally over-hyped abroad, but that is true of the local art scene as well.

Not that the local art scene is bad, far from it, but the emphasis is on “local”. Brussels certainly isn’t “the new Berlin” and even less “the new Los Angeles”. It’s dynamic thanks to a myriad little non-profits that are very active, and then they have some weird hybrid model here where they seem to have public money going to support private commercial galleries as long as they show local artists, I’m given to understand (a lot of exhibitions at private galleries get a notice "with the support of [either the Flemish or Walloon authorities]"). They even have art dealers doubling as the main “art critics” writing and publishing about the artists they represent and claiming it represents scholarly work instead of pure marketing, but then the notion of “conflict of interest” doesn’t seem to rise to the consciousness of a lot of actors in the Euro art world in general. In any case, the impression one gets from the Brussels art scene is that there are many little thing going on, but a lot of them seem stuck in a post-conceptual time warp, and the ambition always remains hyperlocal rather than international. And, why the hell not? But this is where the comparison with Berlin and Los Angeles stops. 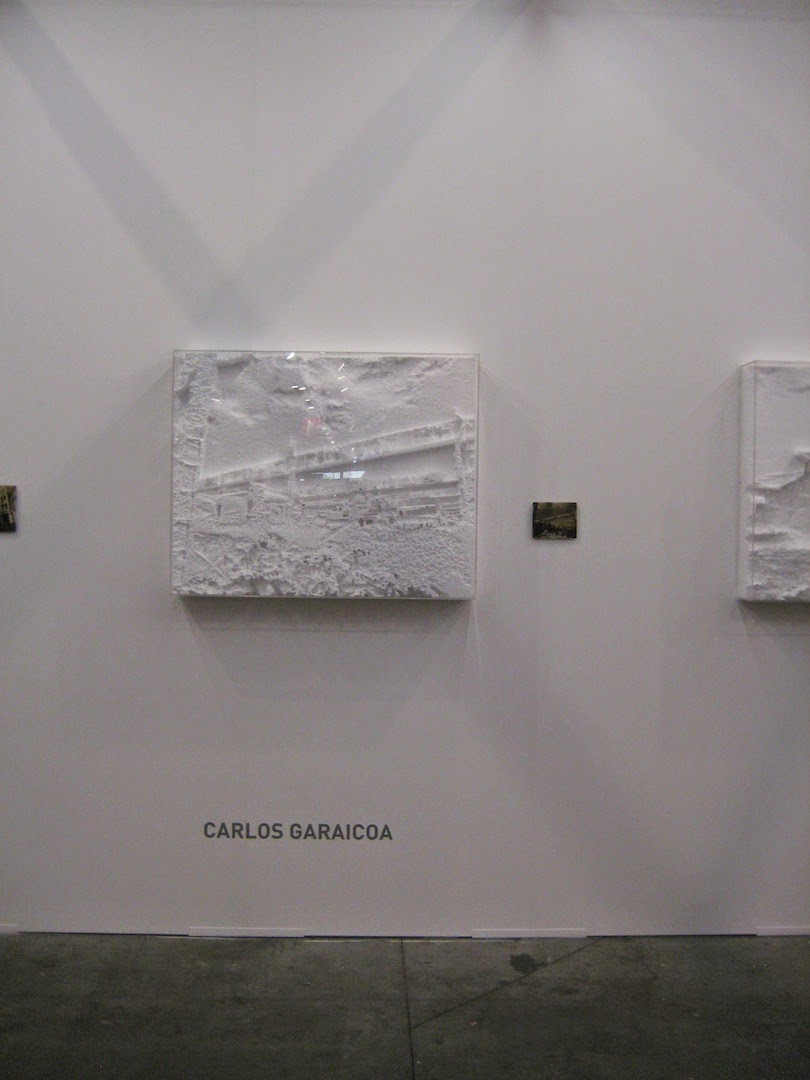 That one was really fun too, with a texture obtained by carving into styrofoam, but you can't help thinking it's going to age badly, yellowing and crumbling in a year or two.

The result here in Brussels is that you have many small art events everywhere all the time, some of them interesting, many others totally incomprehensible if you’re a foreigner. The main issue that stops the growth of the Brussels and Belgian art scene, IMHO,  is that there isn’t a national museum of modern/contemporary art anymore, and if not for the Wiels (a Kunsthalle installed in a gorgeous former brewery) that stages ambitious international exhibitions, there would be no real visibility for foreign artists here and for Belgian artists abroad.
The SMAK in Ghent (please, let someone tell them what smack means) and the MHKA in Antwerp are good institutions, and you have really interesting museums in Ostend and Leuven, but generally speaking it feels like the country is lacking a national collecting institution that could really support artists and attracts visitors, and become the natural home for the famed Belgian private collections.
To my knowledge Brussels is the only Western capital that doesn’t have a flagship modern and contemporary art museum, when most big cities actually have several, collecting or not (NYC: MoMA, PS1, The New Museum. LA: MOCA, LACMA, the Hammer. Paris: the Pompidou, the Palais de Tokyo, the Jeu de Paume. Etc.)
This lack of a great institution (when there used to be one before) feels extraordinarily provincial, especially since there is a public here for cutting-edge culture if you look at, say, contemporary ballet or avant-garde music.  Provincialism was also the vibe I got from the art fair* and it is strange to see visual arts trailing live performances in a country that used to be more trailblazing for contemporary arts 20 years ago. 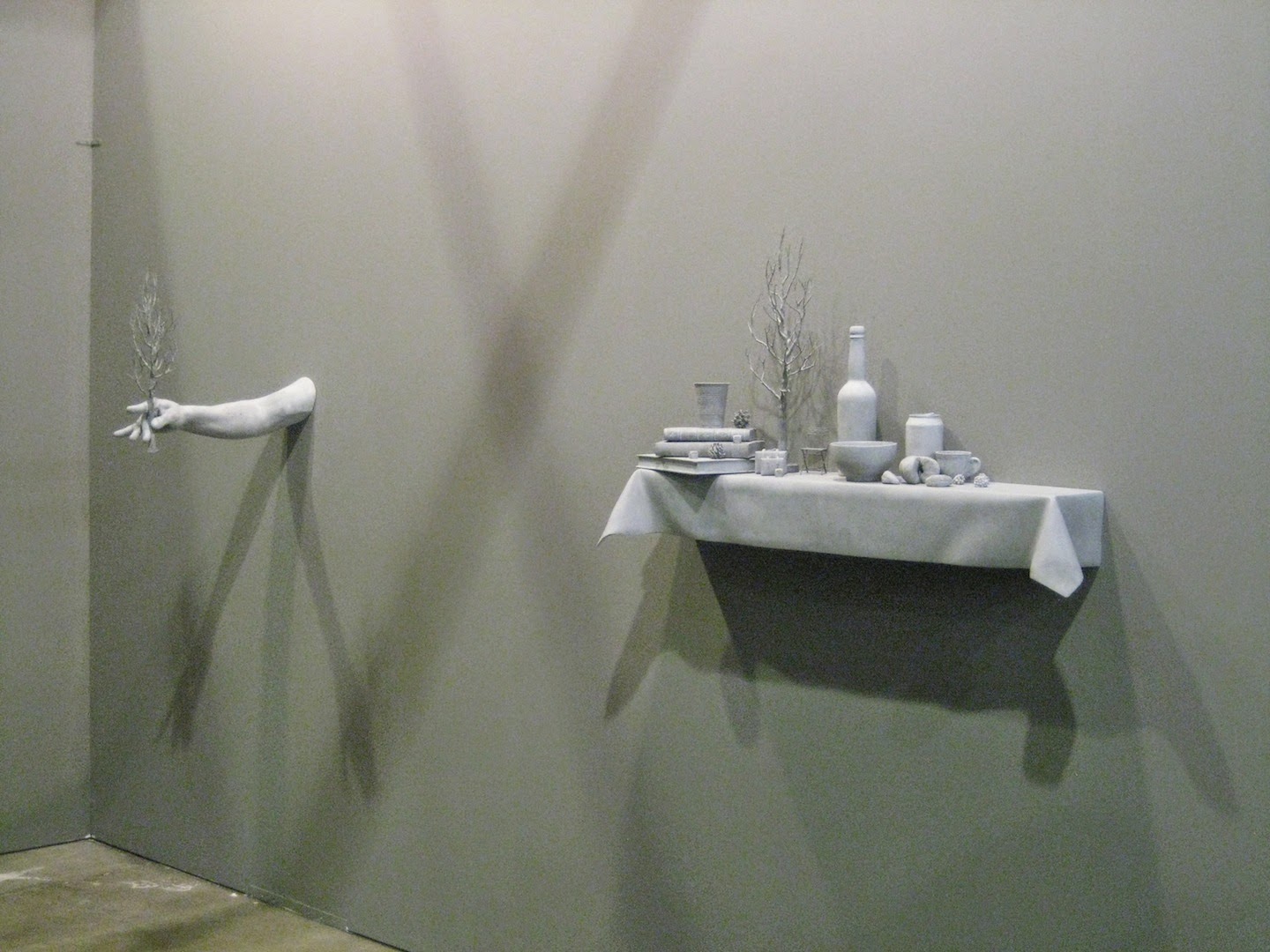 A work by Hans Op De Beek, one of my favorite Belgian artists.

As for the business end of the fair I do not know, except I’ve been told of lukewarm sales from a few art dealers I know. As a spectator, I felt a little bit like I was visiting Art Cologne circa 1993. A lot of the art being shown had a D+, C- quality to my eye, with an overall grayscale aspect: a lot of black and white photos, drawings, post-conceptual art… The disappointing thing was that, if you’re at an art fair that isn’t huge on the international circuit (it’s not Basel or Frieze obviously) and where most of the exhibitors are local, you could think that it allows for some discoveries, maybe some new artists, some interesting booths, and some surprises. For example, about 20 years ago I remember going to the FIAC in Paris, a fair that at the time was particularly lame in terms of offerings, but I got to discover Tetsumi Kudo, whom nobody gave a damn about then but looked so different from everything else on view then it really stayed imprinted in my mind. 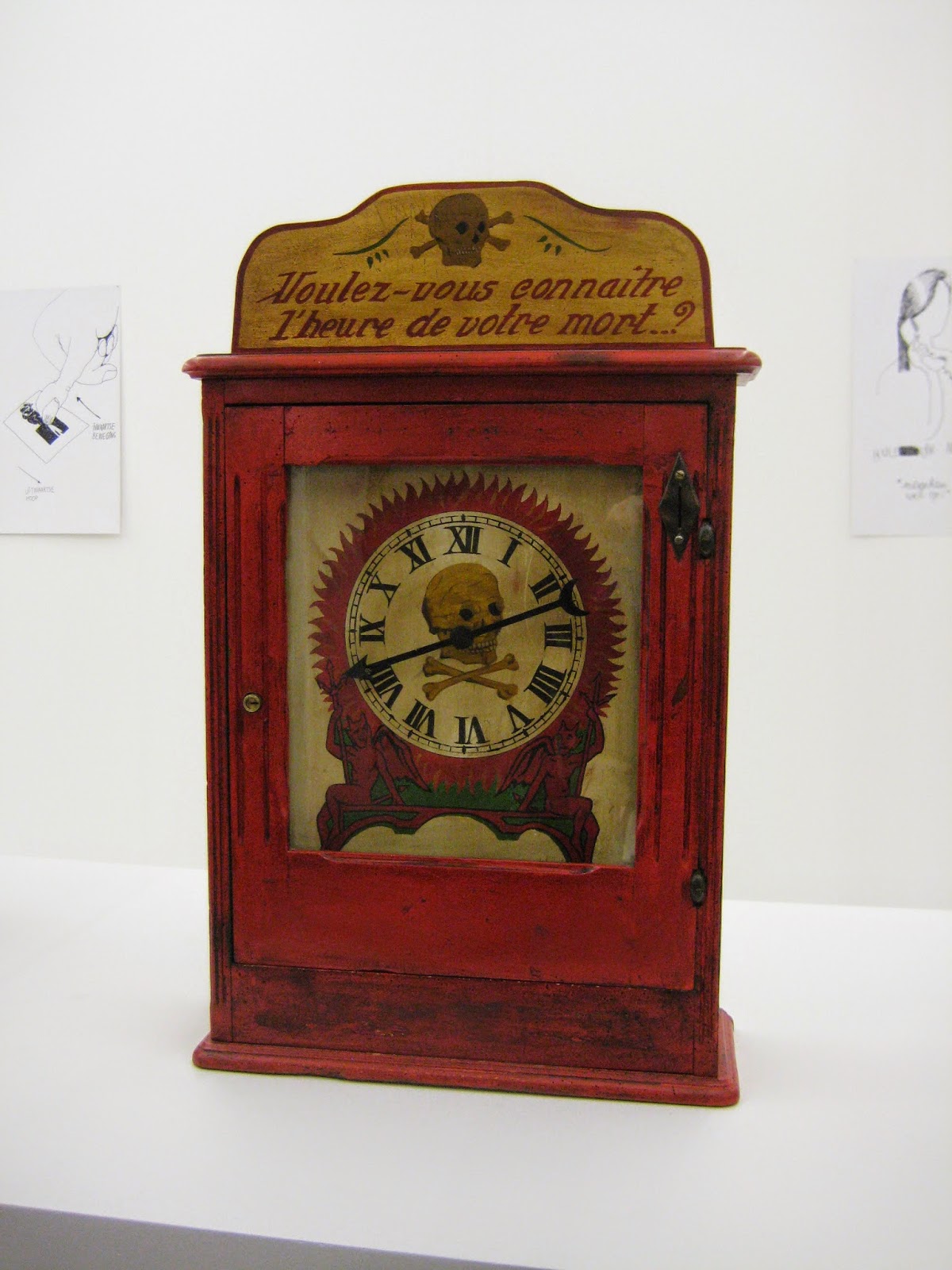 Do You Want To Know The Time Of Your Death? a really fun, fun display from the Belgian National Lottery booth. It's a real national lottery, not an art collective operating under that name.

At Art Brussels if felt like most of the new artists were totally derivative of something else, as, say, many of the painters seemed to be doing pale imitations of Sigmar Polke or Martin Kippenberger.  There were lots of very pretty gray drawings and watercolors in the style of Hans Op De Beek, as well as many real Hans Op De Beek works (thanks God for the real Hans Op De Beek). Someone somewhere made some really, really bad giant knock-offs of Warhol, and then you had many artists trying to do some 1960s- style Op Art. It reached a stage where I was very happy to see works by artists I don’t really care for usually, like Anthony Caro, because, woozah! It’s well made! There’s an attention to detail and craft! Other things that I liked were due to the fact that I’m a sucker for taxidermy, so the Kader Attia work with a stuffed cheetah (I think the work might have referred to post-colonialism maybe?) made me happy. There was a bandaged bear somewhere, too (not pictured here, a bit reminiscent of a tamer Paul McCarthy).  I was pleased with the many Hans Op De Beek everywhere, because his work is always visually appealing; with a ghost-like quality that makes them very attractive. 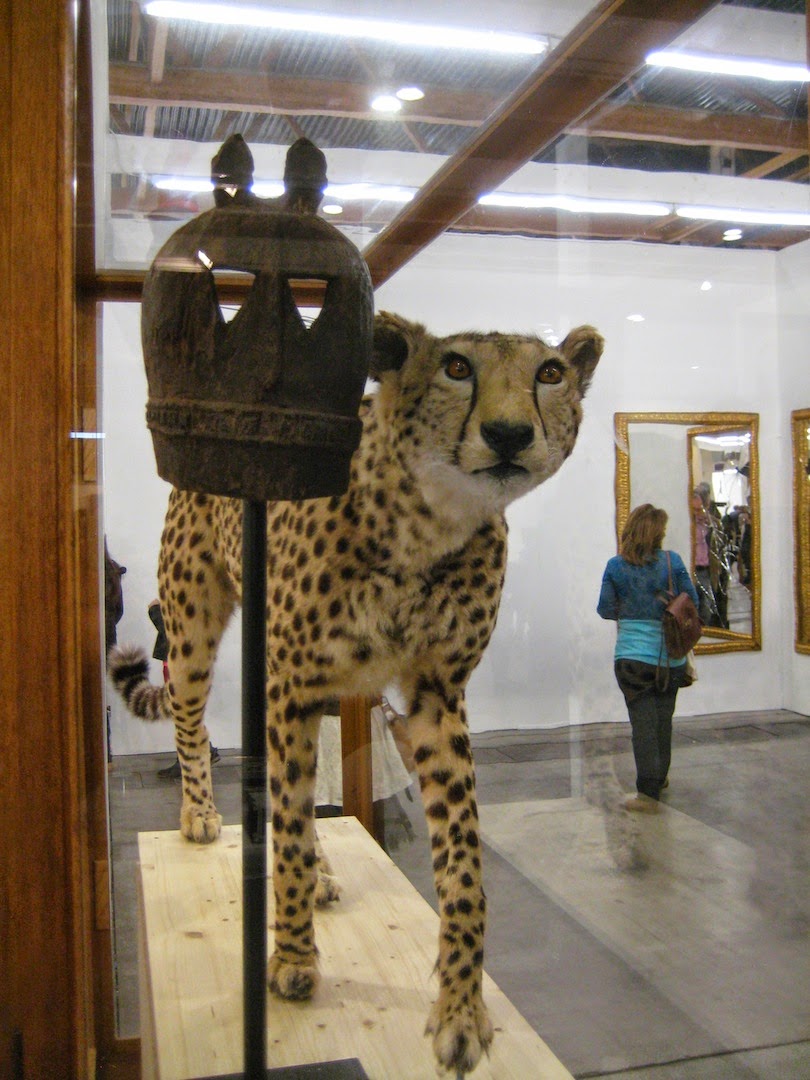 The taxidermied cheetah in the Kader Attia work.

In the section with the most established galleries there seems to have been a lot of Thomas Ruff photos, and as I’m a big fan I was rather happy to see them. Another standout for me was a very rare Stanley Brouwn, a pioneer conceptual artist whose work is too confidential everywhere. I was surprised to see a large Allen Ruppersberg on display but that was before I knew he was about to have a solo show at the Wiels next  month**. But my favorite booth ever was the one for the Belgian National Lottery, which, er, I don’t know why there were there, maybe they fund something art-related, but we got to see old drawing machines and that was fun. 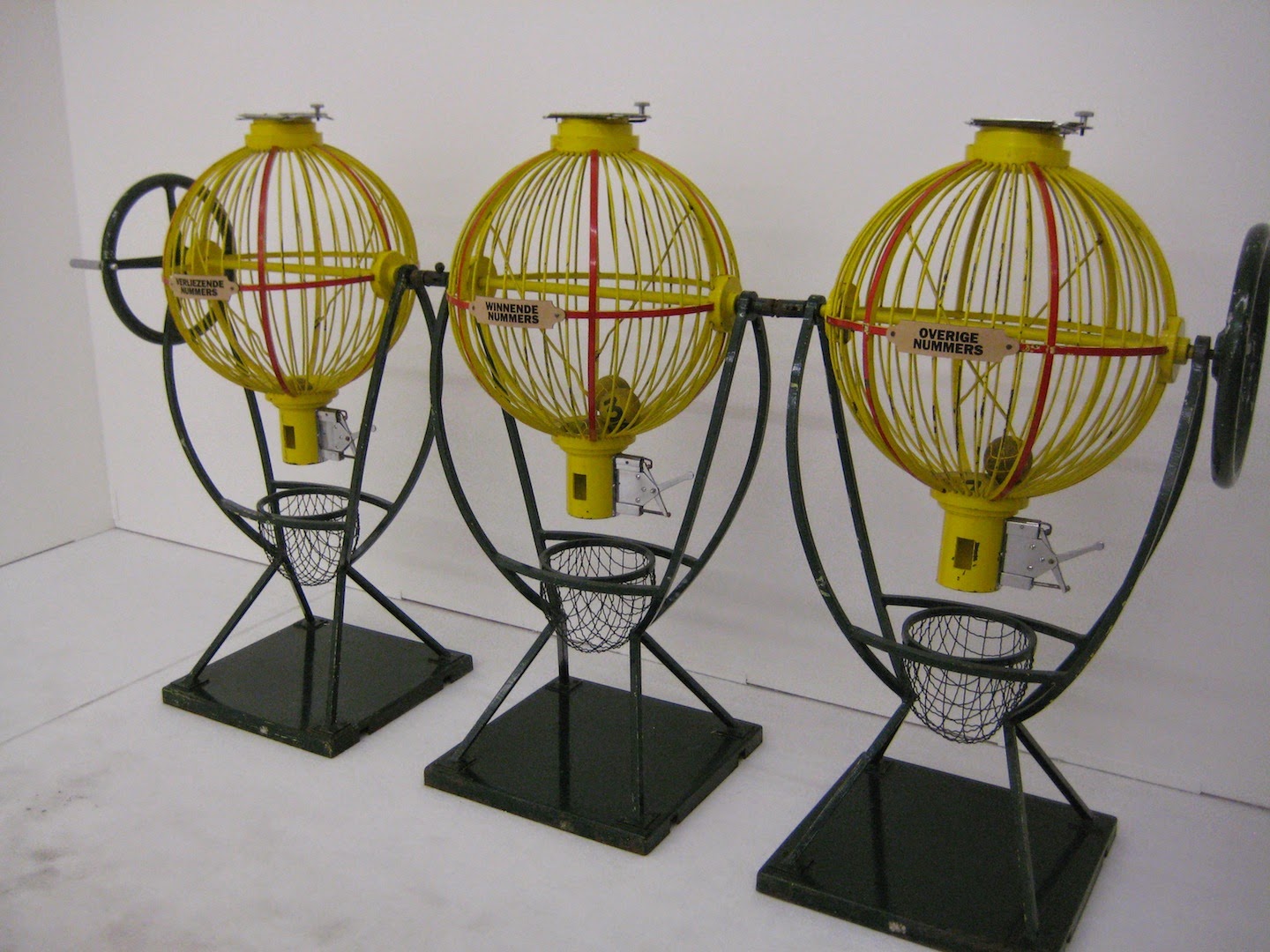 Overall, it was hard not to feel underwhelmed by the fair, as everybody I talked to concurred.  It’s a bit difficult to know what to attribute this to, a lack of money, a lack of ambition, or something else? There were a few good things to counter the lackluster art offerings, namely the fact that the fair is human-sized, and the general atmosphere was more relaxed and felt less like a display of bling than at the usual fairs.  The few cafés scattered strategically around weren’t horribly expensive save for the Ruinart champagne one but that would have been expected.
In the end, it’s just a fair, i.e. an anachronistic medieval trade exchange of physical goods, and not some cutting-edge intellectual group exhibition. Its only purpose being commerce, there isn’t much to be drawn in terms of having a panorama of contemporary art. But as far as trade goes, it gives the image of mediocre offerings proposed to a clientele perceived as undemanding and provincial. I can’t tell if it was a successful commercial strategy, but as an amateur bystander it made me feel like someone going to a bookstore wanting to see what the current serious literature was at and being confronted with third-rate genre writing instead. 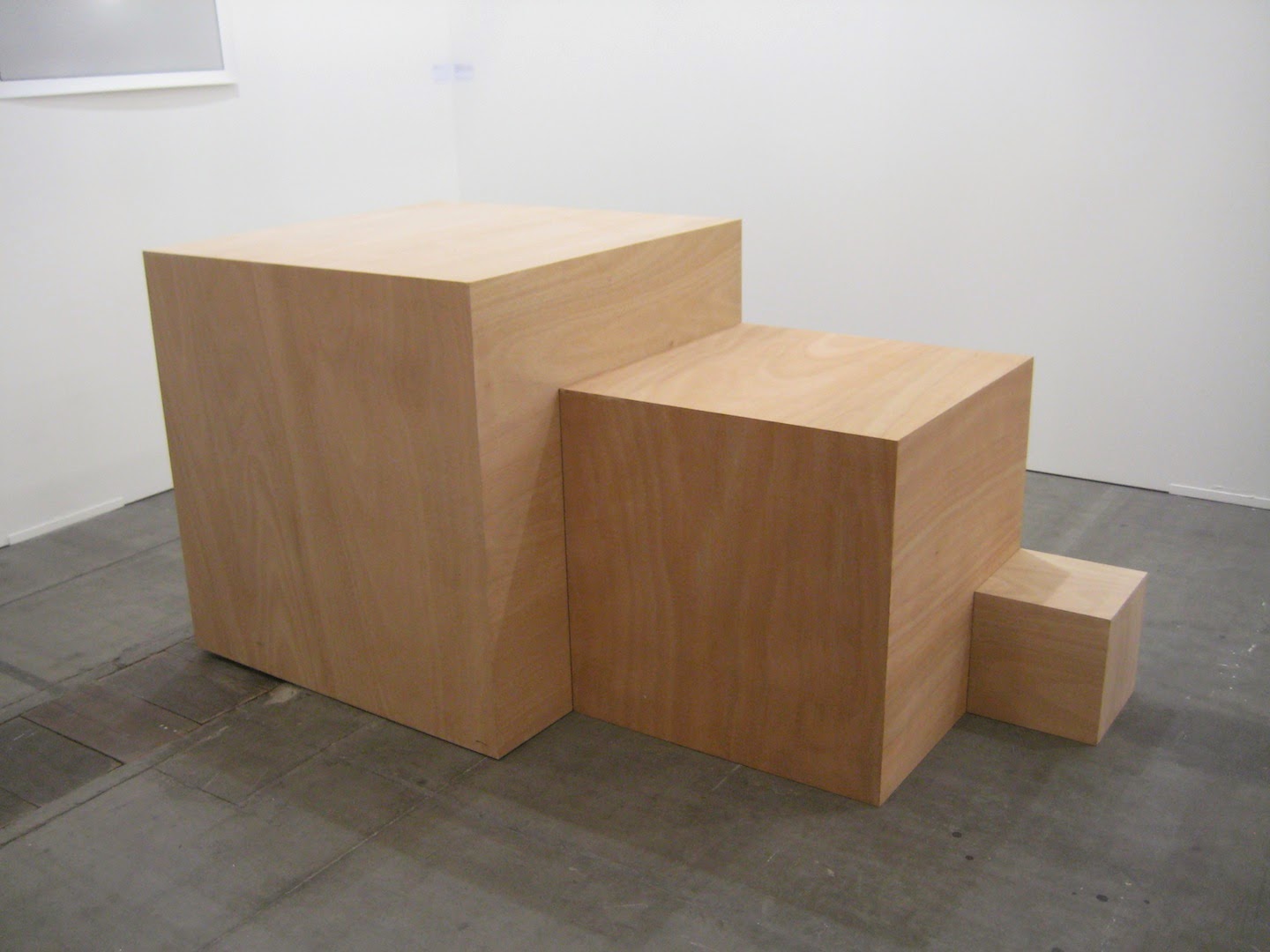 *  Lest I be accused of comparing everything to Los Angeles (where the art fairs always suck) everybody I met who went to Art Brussels told me the same thing, whether they were curators, artists, critics or art dealers themselves, so I didn’t invent this “provincial vibe”.

** The Wiels is by far and large the standout institution in Brussels and I really love their shows. But  out of the last 4 solo shows and the next 2 upcoming ones, they showcased 5 male artists and one woman. The next show is Allen Ruppersberg and Robert Heinecken, which I'm looking forward to. They announce it as something coming out of LA, but if you want to showcase a great photographer based in LA who’s been on the scene for decades and deserves a solo show, Judy Fiskin comes to mind. The lack of women representation in the art world is a problem everywhere, not specifically Belgium, but it’s not a reason for Belgian institutions to contribute to enforce the status quo. People here are smarter than this.
Posted by Frenchy but Chic! at 5:07 AM