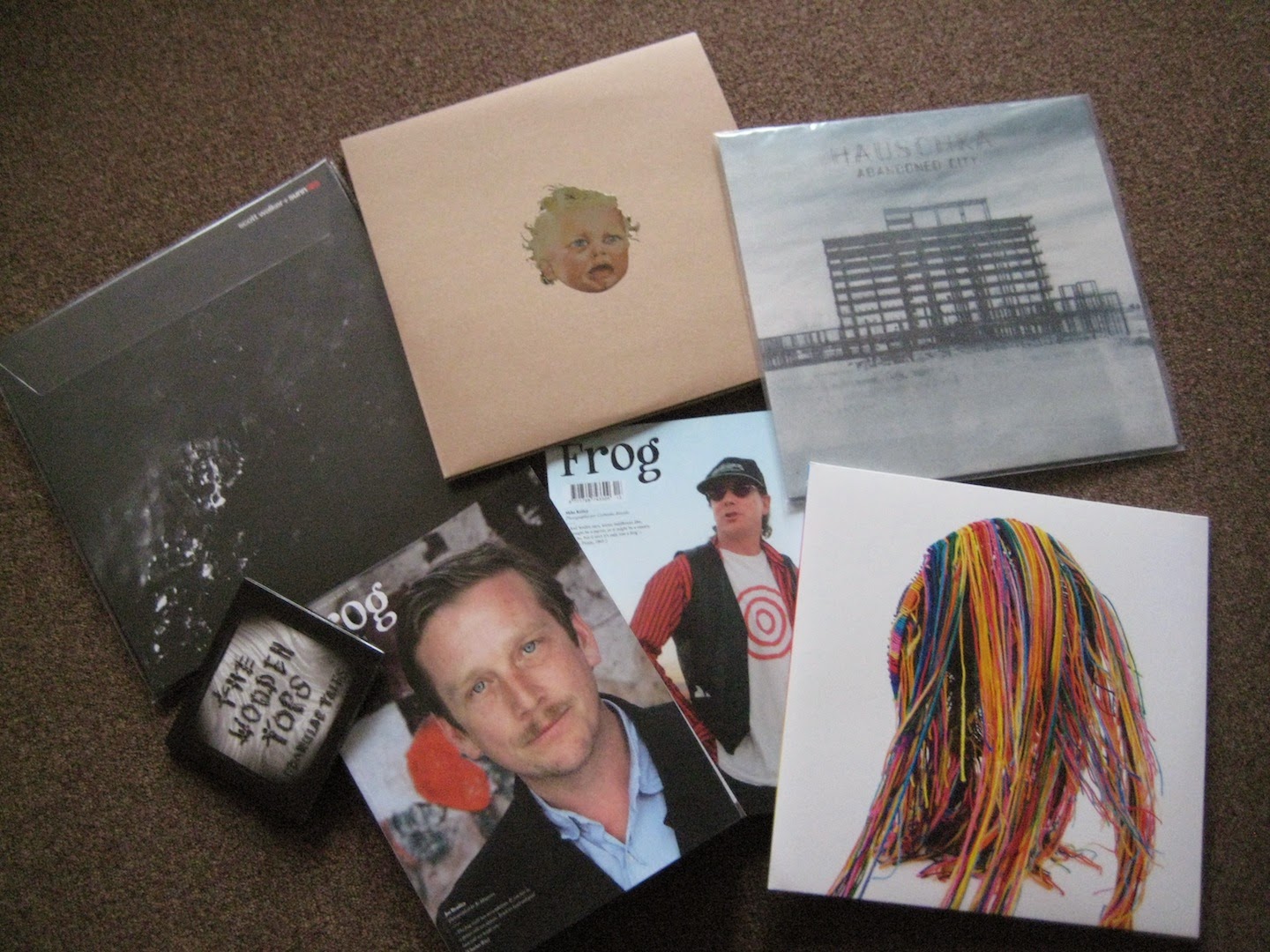 It's this time of the year again, when every single music magazine or website publishes its top 50 or 100 of their favorite albums of the year.
Nobody really gives a shit which ones were mine, beside I am so absolutely predictable anybody who's been following FBC! for the past few years will know *exactly* which ones are my top 3. But, this being December (meaning, not ALL albums of 2014 have been out yet) and because there won't be any new blog post on here until 2015 I thought I should keep FBC! on life support a little bit longer with crap and stuff. Speaking of, there will be other news at the end of this post so if you're not interested in music you can skip to the bottom right now.

Now, let's go back to music. There won't be a "top 100" albums because, as I buy everything on vinyl and I'm a permanently broke writer and translator, I don't buy that many records. My top 7 in decending order:

I know, I know. I haven't written a review for lack of time but in a nutshell, I think this is the most accessible Scott Walker record in 20 years, because, let's not kid ourselves, this is Scott Walker & backing band much more than a real collaboration.  Here's Brando, the belter on the album, if you don't find yourself singing OOOOOOOOOHHHHHHH THE WIDE MISSOURIIIIIIIIIIII after listening to it then you don't know what an earworm is.
Only regret I have: this video is ridiculously stupid, Gisele Vienne should stick to choreography I think. Also, I wish there would have been more interviews of Scott Walker and the Sunn O))) people when the record came out, in terms of promotion because this record deserves to be heard and sold and bought and listened to obsessively over and over again.

Told ya I was predictable. Musically I don't think the current Swans are super groundbreaking but the intensity of their music is so deep it doesn't matter. A band you need to see and experience live. Gira did a short Q&A in Brussels recently before the concert and stressed that because people don't buy records anymore, in any form, it's becoming difficult to make a living but as a touring band. Which is great for us, the audience, but imagine how hard it is on musicians. Buy records, people, they last longer than your stupid smartphones and tablets and other shit.

I love Liars, a band I've never seen live but it's not for lack of want. It's probably the only electronic act I find interesting aside from Dan Deacon (who's going to release a new album soon, I'm told). It goes beyond the usual clichés of electronica yet manages to make you dance to dirty tunes. If there had been no Swans and Scott Walker this year they'd be my #1.

Not strictly "an album" per se but the soundtrack to a live performance piece commissioned to them for the centenary of the First World War and premiered recently in Dixmude, Belgium. It's narrative and contains some tunes and lyrics not written by EN (the various hymn and Sag Mir Wo Die Blumen Sind, made famous by Marlene Dietrich). As such it is uneven mostly because of the one song where they use autotune, proving to the world that even EN (and John Cale 2 years ago) can't manage to do anything decent with autotune.  Below is a live performance of Lament in Prague.

That album came out about the same time as the new St. Vincent one (the indie Lady gaga), which was extraordinarily over-hyped in the same proportion it was overproduced and lacked soul. Meanwhile nobody really talked about Blank Project which I found much more adventurous musically than St. Vincent and had much more depth and soul.  Thank you, Neneh Cherry.

The Woodentops were one of my favorite bands when I was a teen, long, long ago sometimes in the last century. They made a new record that came out this year but unfortunately for them they're signed with Cherry Red, a label that doesn't bother with promotion and vinyls for things that should count. There are very few videos on YouTube alas, but trust me, this album is very good. Buy it, if only for A Little More Time, the best song on the record I think.

A really good album of prepared piano music. It certainly lacks John Cage's use of silence and to a certain extent also lacks subtlety (there are some slow numbers which aren't very far removed from shopping mall piano playing, especially on the extra tunes you get if you buy the vinyl. In passing, this is a very generous gesture) but it's an excellent gateway drug to more experimental or interesting music straddling the divide between indie (for lack of a better word) and contemporary "classical" music. A bit disappointing live but apparently his physical handsomeness makes up for that in the eye of his audience.


And that's pretty much it for my end of year list. Told ya I didn't get to buy that many albums. If you want to contribute to the "let's extend the Frenchy musical library" fund, all monetary donations are accepted.
There were lots of other records my friends seemed to have loved, but that didn't do anything for me, such as The War On Drugs (boring) and Girls In Hawaii. I've seen a lot of people enamored of the new Perfume Genius, but alas I listened to it only after seeing the band live and, uh if you have pitch problems as a singer and your material so depends on adventurous and difficult singing, it's an issue. The few songs I heard from the record were very interesting but unfortunately that live experience totally ruined it for me.


And now that this year is nearly over, something deeply personal. I had started this year in the pits, as some of you know, and didn't expect much improvement as it went on. Yet at about the same time last year, about seventy people reached out to me on Facebook and somehow made things more bearable to me. I would like to thank all of you collectively, for taking the time to be supportive and loving when I truly needed it.  It was an astonishing and truly beautiful experience for me, especially as many of the people who messaged me were virtual friends I've had not much contact with before. From the bottom of my heart, thank you all, it's been much, much appreciated. And also very humbling.
After this, everything that could make 2014 better happened: the new Lydia Davis book came out, and then there was the Swans record, the Liars one, and blowing everybody away, the new Scott Walker one. It can only be a good year when all these bands release an album, right?

Something else wonderful that happened this year is I started to collaborate to Frog Magazine (a print only art and architecture biannual publication) where I found a happy home writing and publishing, thanks to its marvelous editor, Eric Troncy whom I finally met in person this year, and it was the beginning of a beautiful friendship (hi, Eric!).
All of you who read FBC! for the now super rare art writing, I'd like to encourage you to go and buy Frog, because there is some truly great writing in it, all the photos are taken by contributors (i.e. not the same press photos we see over and over again in other mags).
In the next issue that will likely be out in the Spring of 2015 there will be a review of Sigmar Polke at Tate Modern written by yours truly as well as a feature on Cady Noland, and a review of Robert Gober at MoMA with really great photos by Grant Wahlquist, thanks to Chuck Kim's help in securing the photo op.
And in the latest issue (#14), which you can buy online at the link above but also at select vendors worldwide, I've published a very weird article that starts as a review of an exhibit of the late French TV stage magician Garcimore at a roadside museum but somehow manages to cover Marina Abramovic's magic pee, the distinction between mainstream culture and the possibility of an indie one in contemporary art, and lots of other things.
I'm not sure exactly what I've done with that one, to be honest, but I'm rather happy with it, a rarity with my own writing, so if you're curious take a gander at it. And if you read French I can only recommend you read ALL of Eric Troncy's articles. He's the best thing that ever happened to art writing, and, personally, to my own writing as well.

Great! i need to get the Scott album on vinyl. But it is truly a great album. And yeah, it is most commercial sounding record.... I think, no?