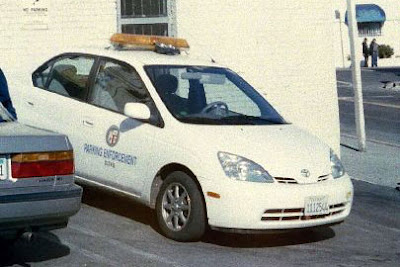 Dear 3' Tall Parking Enforcement Officer
I want to sincerely thank you for slipping this parking ticket under my windshield wiper yesterday afternoon while my car was peacefully and legitimately parked at a meter on La Brea, right next to TJ's. I was extremely surprised to find it there since there were 17 minutes of prepaid parking left in said meter.

The only 2 reasons why I park on the street rather than at the *free* TJ's lot are:
1) it's a zoo out there, and after a recent and debilitating car accident, backing up and turning my head are a bit too difficult for me to willingly maneuver my car if I can help it
and
2) I like to think I help the broke-ass City of Los Angeles by giving it my spare change, though after yesterday I'll probably save it for the gazillion homeless people our lovely bankrupt State is creating by the minute, and will instead run the risk of being hit by yet another idiot LA driver on his/her cell phone in the TJ's lot.

After I grabbed that ticket I realized you wanted to bring to my attention the fact that my tags are expired, just in case I wouldn't have noticed myself. Thank you for your consideration. While it is true I have suffered slight brain damage in the most recent car accident, I have nevertheless not been oblivious enough to skirt performing my obligations toward the State of California.
Furthermore, I had just spent a lovely afternoon at the DMV at the end of last week to figure out why a) despite paying my fees eons ago no tags had been mailed to me and b) what was happening with that salvage title I should also have received a long time ago (see "debilitating accident" above).

The very helpful DMV employee laughed at me when she heard I had "mailed the forms to headquarters up there in Sacramento" and helpfully made me re-fill several forms, pay more money to the State, and finally gave me a nice red placard with a white "10" printed on it, to coordinate it with my fabulously cute car (my baby is flaming red).
It's called something official or other but it does have a nice "temporary registration tag" affixed to it, and it's valid until October 29, 2009 (3 weeks from today, in case you cannot count on your fingers). I dutifully taped it to the lower right side of my back window, as mandated by the DMV, and it has been adorning my car since last Friday, hence allowing me to drive my vehicle around until my mechanic gives me a "light and brake inspection certificate" and I go back to show it to the DMV and get new plates and a new title (next week).

Which prompts me to ask you, dear Parking Enforcement Officer: are you 3' tall? Because only a midget-sized person could have missed seeing the temporary registration. I'm very impressed you didn't see it, because to check that the meter wasn't running out and then put this ticket under the wiper, you must have exited your car and walked up to mine. I'm only 5'1" myself (hence my need to drive fun but pint-sized Korean cars) and even I, standing up, can see this temporary registration placard prominently displayed where the DMV told me to put it.

In case you read this ad, I would very much like to meet you for coffee and see if you exist for real. I've never met a 3' tall Parking Enforcement Officer and I would love to get the experience, in anticipation of writing my memoirs.
It's about being badly injured by LA drivers who run stop signs, traffic lights, hit your car while being on their cell, etc. and I think at some point the reader would like an encounter with a midget parking enforcement officer, for a bit of comic relief.

I already have a book deal with Random House and my agent is in talk with ABC to turn it into a sitcom, with some really poignant hospital scenes (we hope to get George Clooney to guest star). It would be cool if we could also get Danny de Vito or Verne Troyer to play you. Before we get to that, it would be nice to meet you in person, to get your insight into parking enforcement experience in Los Angeles, and to learn how, against all odds, you managed to make it as an officer. It's a tough world out there for 3' tall parking enforcement officers, and I really admire how you rose to this challenge. I suppose, you had to climb on top of the hood to slip that ticket under the wiper. You're a real hero. Tell you what? Maybe we could create a whole new reality show around you. We'll call it "Parking with the Stars".

Photo found on the LAist site here.
Posted by Frenchy but Chic! at 11:51 PM