Mike Kelley And Michael Smith, A Voyage of Growth and Discovery 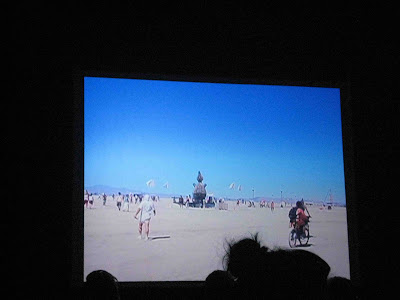 Last night was the opening of the West Coast incarnation of Mike Kelley and Michael Smith's A Voyage of Growth and Discovery, initially presented at the Long Island Sculpture Center in NY last year.
Being a big fan of both artists, FBC! couldn't miss Kelley's first big solo show in LA since 2001, and Michael Smith's first ever (? not sure about that one, couldn't somebody bring his retrospective to SoCal, dammit?). The LA stop was held, through West of Rome Public Art organization, at Mike Kelley's current studio, the Farley Building in Eagle Rock.

A Voyage of Growth and Discovery (henceforth known as AVOGAD) could be aptly subtitled "Michael Smith does Burning Man" as, according to the press release: "The two-and-a-half hour, six-channel video component of A Voyage of Growth and Discovery follows the existential journey of Baby Ikki, a character conceived and portrayed by Michael Smith, as he wanders through an annual art event and temporary community based on radical self expression and self-reliance in Nevada's remote Black Rock Desert. The installation evokes the festival's fantasy-like environment, which is both folksy and grand—a mixture of fairground, playground, hippie commune, and the futuristic architectural aesthetic of R. Buckminster Fuller." 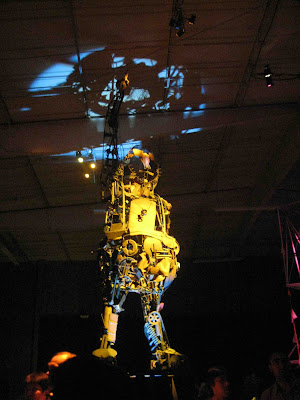 The collaboration between the two artists is successful as it nicely blends both the style and vocabulary of its creators, without any one of them overwhelming the personality of the other, while maintaining distinctive voices.
For example, Smith's trademark performative video work is the narrative that binds the sculpture display together, with the presence of his usual themes of learning experiences or achieving some sort of educational progress through various absurd encounters with the vernacular.
Meanwhile, Kelley's visual tropes are disseminated throughout the installation, from the stuffed animals to the tubular steel frames seen previously in Test Room, for example, while the all encompassing music serves to unify the experience.
It's not surprising both artists' sensibilities blend so well, given that they share, among many things, a background in performance and a deep interest in the flaws of contemporary educational system. In addition to the same fist name. There's even somewhere a common interview they did in the 1980s, called "Mike talks to Mike about Mike", which FBC! owns somewhere deep in the But Chic! archives vault, but I can't remember exactly where, so no unearthing for you. Just move off your lazy bums and find it for yourselves, OK? 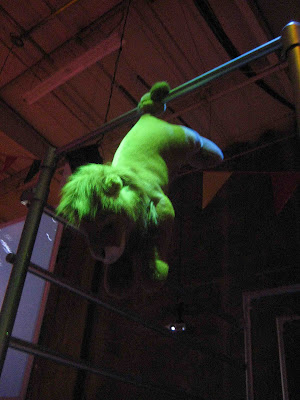 The opening was packed, with lots of LA artists and former students of Kelley , such as Ivan Morley, Stephanie Taylor, Jennifer Moon, Will Fowler, Lisa Lapinski, writers who specialized in Kelley's work like John Welchman, former and current collaborators of his like Anita Pace and Scott Benzel, as well as Kelley's most devoted collectors Kourosh Larizadeh and Luis Pardo, art dealer Tom Solomon, and plenty of other people I have missed (hey, it was dark and crowded in there!).

Aside from the nice reunion feel of the event, and the pleasure to finally see Mike Kelley and Michael Smith in Los Angeles, the whole installation/exhibition merits more than a cursory review, and I sure hope to come back several times to see it better. For one thing, I'd love to see the entire video cycle, not only because I would like to really "follow" the narrative, inasmuch there is something to follow in it, but because several passages I've spotted were downright beautiful. I know "beautiful" isn't an adjective often used in conjunction with both Kelley and Smith's work, but get over it people, there is plenty of beauty in this show. From the fireworks display in the video to the lights and shadows in the physical installation.
Scott Benzel obligingly told me the artists were working on single-channel version of it, something I'm looking forward to. 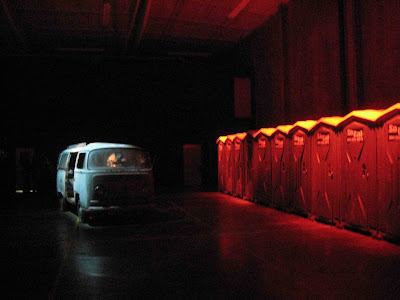 What I liked very much was the cohesive aspect of the show, which in this respect I liked much better than Kelley's previous monumental masterpiece's Day Is Done. There are lots of things spawning from Day Is Done in AVOGAD, such as the use of integrated video narratives within the sculpture/installation (video narratives with a heavy content, as opposed to, say, Pipilotti Rist's lightweight use of same formal device in her work), the concatenation of several themes and time-based recorded events in a single video subsequently presented on split screens and non-successive time frames, the circuitous path the viewer is instinctively invited to take to embrace the show, the use of sound and music, etc.

But unlike Day Is Done, AVOGAD's structure is much simpler, down to the skeleton aspect of the sculptures, the circuit is really circular, and if the interest in the vernacular that marks Kelley and Smith's work is underlined, it is in aspects of the vernacular that are easy to grasp for the viewer (Fuller's geodomes, the Burning Man theme, the VW wagon, etc). Speaking of which, someone familiar with Kelley's work will have fun spotting little details, like the blankets at the bottom of one sculpture reminiscent of work he has done in From My Institution To Yours or Proposal For the Decoration of An Island Of Conference Rooms (With Copy Room" For An Advertising Agency Designed By Frank Gehry, etc. 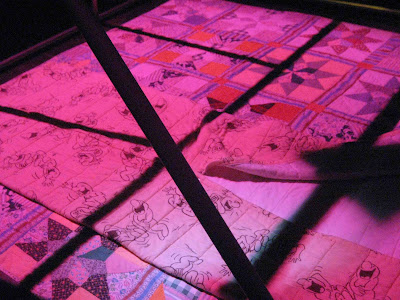 In this sense, Kelley seems pretty much liberated from all the interpretative crap about childhood trauma hurled at his work in the 1990s, as if the impressive body of work he has done since then has finally allowed the viewers to see his use of stuffed animals and blankets for what it is, visual vocabulary. Also, unlike Kelley's previous works, probably because of the collaboration with Smith, the content of the piece is not as archeologically layered as in Day Is Done, making the whole experience far less overwhelming and much simpler to comprehend, not mentioning very funny, since both artists are well-known for their humor.

There would be much more to say about the show, but as I only was there for about an hour, in the company of hundreds of other people, I can only invite you to go see it for yourself.
There was an aura of pure happiness in the Farley Building last night, everybody seemed to enjoy the show tremendously and have a blast. Most of the conversations I've seen were punctuated by people spacing out from the discussion to look at the work, look, and look; and everybody stated "I HAVE to come back". Lots of children around, who had the fun of their life. Yes, people, you can take your kids. They will thank you when they are grown ups.

There is a CDs, "Dance Beats For Baby", a collaboration between Mike Kelley and Scott Benzel, with vocals by Michael Smith, issued by Compound Annex. "It melts in your mind, not in your hand".
Posted by Frenchy but Chic! at 10:57 AM