Let's Not Make Plans For Nigel, He Has No Future In The British Steel Anymore

Unless you're living under a rock, and in that case, oh, how do I envy you, dear beloved yet thin readership, you know that yesterday Margaret Thatcher died.
That's it, the scarecrow of my childhood has finally croaked her pipe!

There's been an avalanche of articles in mainstream medias on both side of the Atlantic, most of them praising her legacy, a few of them elliptically critical ("sometimes a divisive figure", "her policies meeting some resistance"),  many of them downright ridiculous in their effort to whitewash the debilitating impact her ideological rule has had on millions of people in her own country.
Mass privatization, mass deregulation, increased poverty, derelict infrastructure are her legacy. Millions of people who ended up on welfare  happened there in the first place because of the near-total dismantlement of the manufacturing base in the UK, and the lack of replacement opportunities for all the people who lost their job. They were no alternative plans made for Nigel by the Thatcherites, so he ended up on the dole instead of finding his future in the British Steel.

The most absurd articles praising Thatcher's legacy were, unsurprisingly, published in the US, where they still believe Ronald Reagan ended the Cold War and don't even know who Gorbachev is. They conveniently ignored the fact that Thatcher was against feminism, loved to mingle with dictators like Pinochet, supported the Apartheid regime in South Africa (going as far as labeling Nelson Mandela a terrorist), but they didn't hesitate to tout her as a "freedom lover".

Meanwhile, a curious thing occurred: within minutes of her death being announced, a collective burst of glee and schadenfreude overwhelmed social networks, more often than not materialized by cries and singing of "Ding, Dong, The Witch Is Dead!"
Searching "Bobby Sands" on Twitter within 10 minutes of the announcement returned thousands of tweets (and it still does, if you care to search it now). Some parties were spontaneously planned to celebrate the death of the Wicked Witch of the West  (I've seen evidence this morning of 2, in Brixton and in Glasgow) while lots of people were all going "let's go get some bubbly"!
The fascinating thing was that it wasn't only British people rejoicing, but also French, Belgian, Spanish, Portuguese, Dutch, Danish, German, American, Swiss people, etc. So much universal loathing for a political figure that didn't govern the rest of us must mean something, right?

The gap between this overwhelming response and the mainstream media coverage was growing up by the minute, and eventually the UK-based, billionaires-owned right-wing tabloids caught up and chastised the plebs (us, all of us) for rejoicing.
It was all in bad taste, we were lacking decency, compassion and humanity for someone who was a mother and grandmother, etc.
Most certainly so, but bad taste had never killed anybody, whereas letting millions of people slide into poverty, waging absurd foreign wars or letting Bobby Sands die didn't denote any outwardly remarkable form of decency, compassion and humanity for the victims of her social and political reforms.
Beside, we all have mothers and grandmothers, but so far there isn't any evidence that most of our immediate relatives have engaged in cavorting with dictatorships responsible for the deaths of thousands and thousands of people (see Pinochet above). Also, most of our grandmothers didn't die at the Ritz.

Someone in the Guardian wrote more eloquently than I could ever do why those calls for, you know, not speaking ill of this particular dead person are misplaced. A friend of mine was wondering aloud if we would ever mourn when Berlusconi, GW Bush, Putin or Tony Blair will pass away. Most likely, we won't. Most people I know didn't give a shit when Mitterrand died, and 99,99% of my friends are left-wing. We mourn artists, musicians, writers, choreographers, but not politicians.
I think that when you display so much contempt and disregard for ordinary people who are not you while alive, you lose the right to their respect once you're dead. There are lots of world leaders who profoundly transformed their countries, and usually they're not exactly mourned by their population, unless being forced to do so publicly by dictatorship rule (North Korea, anyone?)

Beyond the morality or decency of rejoicing or not at someone's passing, be it one of the most hated politicians of the late 20th century, I find that tidal wave and outburst of joyful glee fascinating. It is medieval, most certainly, recalling spontaneous partying when serfs learned of the death of a much-hated overlord.
It  also  gave us a rare view into the collective mindset of the people who are now structurally déclassés: the former middle-class, the former working-class, the current unemployed. Our friends, our relatives, us.

We live in an era when  representations of the poor and the working-class have all but disappeared from popular culture. How many books, songs, movies made recently have been dealing with current economic and cultural deprivation? When was the last time you saw a TV show about an entire family losing its jobs/ livelihood because of the financial recession of the last few years? Oh sure, there are always the rags-to-riches sob stories ("homeless man wins the Mega-Millions!"), but I've yet to see a recent artwork or book about, say, unemployed people living in trailer parks. How they make do, what's their day-to-day life, do they have to engage in drug traffic or prostitution just to be able to eat?On the other hand, I do see lots of Kickstarters and Indiegogos to help finance the medical bills of the downtrodden. Correlation? Coincidence?

When the poor are mentioned in the mainstream media it's almost always negatively ("benefits scroungers", "welfare queens", "spongers"), and nowhere can we find some decent analysis of wages stagnation over the last 30 years, the exponential rise of housing costs, and the structural high unemployment in most Western countries (where a common tactic is to exclude long-term jobless people and welfare recipients from unemployment statistics to make these appear lower).
When the lucky few who are still  employed haven't seen their salaries (in constant currency) rise over the last  3 decades, but must spend up to 60% of their income on housing alone, no wonder all they can afford are cheaply-produced artifacts made by near-slaves in "emerging" economies abroad. If people could afford to buy good-quality necessities in the first place, jobs wouldn't have had to be shipped off to China. They'd be domestic growth within our own borders and no need to sink our economies into so much debt.
As an aside, I always wondered how, now that steel industries, British or otherwise, have all but been dismantled and sent to the Far East, would Western countries fare in case of a new World War. If the means of production and the knowledge to operate them have gone, how to quickly kickstart them again in case of sudden, acute need? 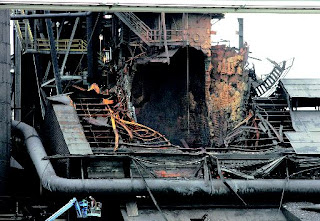 So I guess the collective joy at seeing a hated political figure go, while her destructive politics goes on under the current UK government (dismantling the NHS, forcing disabled and sick people to go back to work and die, etc.) gives a good glimpse of the current state of mind of the current population.
It is frustrated, it is bitter, it is at the end of its tether. Maybe in thirty years from now some historians will see this sea of Twitter  posts and Facebook statutes celebrating Thatcher's death at the point of non-return.
The revolution might not be near, not when the so-called opposition is virtually undistinguishable from the party in power, but from here it looks like the pitchforks are being readied. When you force a sizable chunk of your population into unemployment, economic dependency and despair, it's only a question of time before the first food riots start. Nigel never found his future in the British Steel, his children never had any to speak of, maybe soon his grandchildren are going to light up the pyres.