Craigie Horsfield, Installing his work Above the Bay of Naples from Via Partenope, Naples, September 2008, 2010 photo M HKA


And just like this, with this 556th post, FBC! just turned 6. Dang, it's high time we start elementary school now.
I hadn't realized we had reached this milestone yesterday, and had no intention of posting anything whatsoever this weekend, but there we are.  Normally the idea was to post a review of Tosh Berman's book Sparks-tastic! as the newest post when I'd finally gotten around to write it, well that will have to be next time.

So what are we up today? Not cake, but just a very brief mention of a visit I paid with my friend Nancy to the M-HKA in Antwerp, a museum of contemporary art I used to visit as a kid.
I remembered it then as rather leaning toward conceptual art, and heavy with Belgian artists, though I had no recollection of visiting permanent exhibits, mostly thematic group shows.  It's a short hop from Antwerp's Central Station, one of the most magnificent train station this side of LA's Union Station. If you get on the #12 tram, it's a quick trip  to the museum. Antwerp is a delightful city, in passing, maybe less pretty than Bruges, but more agreeable to visit.
The museum itself is located in an unremarkable yet very pleasant building, not too big,  and I insist on mentioning the two adorable ladies manning the front desk, who where professional and courteous but mostly very sweet. If someone from the museum sees this, it was on Wednesday afternoon and these ladies deserve all the praise we can lavish on them.

The museum is currently showing its collection, which is very 1990s-oriented, and of course has lots of Belgian artists represented. We saw a really great Cameron Jamie installation (complete with a separate entrance accessible to disabled people, super classy), a sprawling installation by David Blair about a Mandchurian film production company that may or may not have existed, a Mark Dion sculpture,  about extinct birds, a James Turrell on the rooftop that is your standard James Turrell sky cut-out but that was remarkable because somehow someone had stuck a bit of tape in one of the top corner...
I don't know if it's an accident or an act of vandalism or a prank, but  if you put a former museum professional like me  in an exhibition space I  will notice stuff like this (or wall labels that come unglued, walls that should be painted, dusty radiator covers... you name it). I found it really funny but of course that was the *only* thing I ended up obsessing about the Turrell...

Two artworks really stood out for me: a semi-circular and spectacular Craigie Horsfield photograph of the bay of Naples with what looks like fireworks. I snatched the picture off the museum's website, so all credits are  Craigie Horsfield and MHKA.  The work is really striking in person, but it was also interesting to me because I hadn't seen Horsfield's work since the mid-1990s and I had somehow forgotten all about it. I mostly remembered somber photographs of working-class people in Poland, where Horsfield lived at the time, before the end of the Cold War, and these photograph for some reason always seemed like a modern analog of Van Gogh's Potato Eaters to me.

The other was a small work that looked like documentation from various performances by the Belgian artist Ria Pacquée whose work I had never seen before nor heard about, and it's a shame because I fell in love with it then and there.
I now feel like someone (say, me, but if it's not me, whoever does that will do a public service) should bring it to the US. It reminded me a bit of Michel Journiac and also Tracey Emin, if Emin had done her work 10 years before and it had actually been not so much about her ago but about a common,  universal experience for a woman, whether she's an artist or not. Ria Pacquée lives in Antwerp and apparently has had some survey show  recently at a Brussels art space devoted to video and film called Argos. I'm looking forward to exploring her work further and hopefully bring it to the United States if I can. 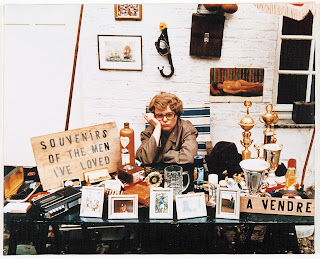 
With this, I'm going to celebrate FBC!'s 6 years with a drink tonight. Have a drink for us as well if you feel like it!