Sparks-tastic: Twenty-One Nights With Sparks In London, A Book By Tosh Berman 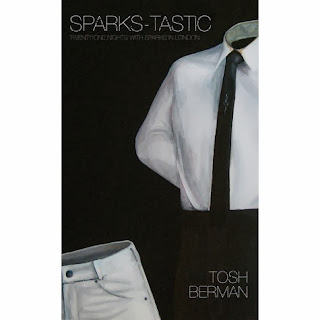 In 2008, the Los Angeles band Sparks did a marathon 21 nights in London, playing each one of their records in its integrality in chronological order, riffing on the trend of bands or musicians playing their often most famous records entirely (a trend I love because you get to rediscover albums and songs).  Sparks is a band made out of two brothers, Ron and Russell Mael, and assorted studio and tour musicians.
Like the Rolling Stones, it's been around almost forever (slightly less longer than the Stones) and has never split up. Unlike the Stones, they keep on issuing very good albums, such as the recent Lil' Beethoven or The Seduction of Ingmar Bergman.

If you've been following FBC! for a while, you know that we do indeed like this band very much, but what you don't know it that yours truly has been converted to the cult of Sparks by the fabulous Tosh Berman, former book buyer at Booksoup in Los Angeles, and current publisher of TamTam Books, specialized in international but also very francophile books by or on such luminaries as Boris Vian, Serge Gainsbourg, or crime boss Jacques Mesrine.
I have met Tosh only once in my life, but we have a virtual friendship on some social networks, where he posts truly inspirational links that exhale coolness, dandyism, elegance, intelligence and great taste. After several years of being acquainted with his posts, I tend to see him as the resident genius of Facebook and Goodreads, in the same sense that the Ancient Romans had resident geniuses to protect their house. A benevolent, protective presence, here to guide you through the maze of great music and literature. Tosh is also the son of the late artist Wallace Berman, and is married to the artist Lun*na Menoh, and so his life revolves around books, music, and art… and many other things!

Through his enthusiasm for Sparks I started listening to them (I knew some of their songs, including their duet with Les Rita Mitsouko), then went to see them live* twice and had a blast each time. I don't remember if I was acquainted with Tosh when Sparks did their London marathon concerts, but I wasn't surprised when he announced he was writing a book about the experience, because Tosh is the ultimate Sparks fan. He kindly sent me Sparks-Tastic: Twenty-One Nights With Sparks In London after it came out and I fully intended to review it earlier, but some massive writing endeavor of another kind kept me from doing it. I'm finally getting around to it.

The book is curiously existential but in a sort of floating, detached way that is difficult to explain, because it is laden with personal anecdotes that would contradict the impression of detachment one gets from reading it. It starts with Tosh, in Los Angeles, being apprised of the news that Sparks are going to play all their albums live in London, and anguished about he financial impossibility to go there and attend. From then on, quite a few things happen but we're never really told of how they do happen.  Like miracles. Did Tosh go into enormous debt to afford the trip and the stay? Was the experience of seeing Sparks 21 nights in a row playing their entire discography a transformative experience? Did he connect with other Sparks fans?

Unlike many books written by fans, Sparks-Tastic is neither the exact memoir of an obsession nor a meticulous retracing of the long career of the writer's idols. Thankfully. I've been fascinated by the whole fans phenomenon for a few years now and I'm usually disappointed by books written by fans** (including biographies) I've read, such as books on John Cale, The Fall or Scott Walker, because they usually lack deep insight into the reason for the writer's obsession, and as far as being informative they tend to lack intellectual rigor - I guess being trained as a historian pretty much ruined Pop writing for me.

This is not the case here, and in that regard the book is highly unusual. For starters, it isn't a book about Sparks. There are some autobiographical components to it  but aside from the very poignant passages about how the death of the author's father they don't really delve deep into the psyche of the author.  Except that the link between Wallace Berman's death and Tosh Berman's obsession for a band that offers him an alternative, imaginary life better than the real one is made abundantly clear and is obvious to the writer himself. Usually fans don't willingly show self-awareness for their love of this or that band, especially when it solely focuses on one band member or a solo act, but even when they obsess about the band as whole (let's remember that Sparks is relatively unusual as it is made of two brothers). Here Berman clearly connect the dots between his need for an alternative musical life reflecting his inner turmoil, and the premature loss of his father.
In that regard the book isn't so much about Sparks themselves, as I said - there is surprisingly very little about the band and their music in it, given the fact that each concert has a chapter devoted to it -  nor about Berman as a person, but it's a document about someone's dreamed life of idealized places (London, Paris), characters (some pages are devoted to Charlie Chaplin) and books. We learn almost nothing about Berman himself save for his love for his wife and family, his devotion to the alternate history of vernacular and pop culture, and the fact that he's crazy enough to go on this big adventure of going away to Europe for more than a month when he can ill-afford it, and comes back with a book.

We're apprised of the writer's daily routine during these days in London, a routine that exemplifies the loneliness of the stranger in a foreign country, able to get by but not to truly communicate with other people. It's a bit reminiscent of Teju Cole's Open City when the narrator finds himself in Brussels on an insane quest to locate his grandmother but spends his days cooped in, giving up on the pretext for the trip to stay locked inside his own alternate world. There are small points of friction with the others but no real exchange. Here Berman goes around in London, but aside from the brief time he spends staying with friends, he doesn't go out of his way to meet people or explore new places. He's on a mission to attend the concerts, and nothing will distract him from it.
Each concert has a chapter devoted to it with a brief introduction to the record being played and Berman's opinion of the album in question, but it doesn't devolve in long discussions about the merits of this or that song or the personnel involved. Sometimes production is mentioned - there is nothing that define more an era of music than the style of production - in relation to the year/location it evokes for the author. There are mentions of the walks Berman takes on his way to the concert venue, flâneur or dérive-style, if you will, and personal anecdotes about his life in Los Angeles when that particular album was released.
Occasionally he describes the other concertgoers, whose age decrease as the gigs go on and the band plays more recent albums, spotting some people who like him come regularly, but he never engages with them, and they never engage with him. It seems that Sparks' audience is entirely made up of loners, at least its London audience.

From this description you could think the book is boring when it isn't at all. It's fascinating for this floating quality of detached narration, when the narrator pretty much describe his own life in all its poignancy, a life that looks alternatively beautiful and terribly sad. It's the life of an aesthete who has built his entire existence around things of beauty, eccentricity and intelligence, confronted to the boredom of daily life; but whose imperative to construct his own alternate reality is triggered by an irreparable early loss that hovers on every page of the book. As such Sparks-Tastic is a curious literary object that like all interesting things is difficult to define. It's a testimony to a very personal way one can decide to counteract the harshness of contemporary society by living in an idealized world of one own's choosing, where interior feelings find a match in a specific type of music and in this particular case, a set of smart, ironic yet  deep lyrics about loneliness, inadequacy, and the impossibility to fit in when confronted to oppressive normalized standards of living.


The book is available at your corner independent bookstore where they can order it for you if they run out, so buy it there rather than on Amazon (where I linked above for convenience sake, but Jeff Bezos doesn't need your money).


*If you live in Los Angeles and they play in town, book your tickets early because they're always sold out.
** Strangely, books written by fans seem to be by male writers. Whereas many truly crazy obsessive (stalker) fans tend to be female. The sexual politics of fandom however appear to be both obvious and complicated, regardless of gender and sexual orientation, and I've never really read anything great about music fans themselves. I'd be interested if someone has good reads to recommend on the subject.