The following post is a verbatim reprint of the press release for Liz Magor's current exhibition in Marseilles. I haven't seen the exhibition at all but I can only applaud when an institution and a French one to boot shows a woman artist whose work isn't well-known in Europe. The show also features three other artists whom I'm skipping here in order to keep the post short, but if you go to the website you will have a more complete idea (and a longer press release).
As a side note, I was somewhat mentally prepared for a very male, very white art world when I moved back to Europe, but between being prepared and experiencing it… the lack of diversity here is staggering. Kudos to Triangle France for having a program that strives to be more inclusive.

So here's the press release, and if you find yourself near Marseilles, go visit the show.

Triangle France is pleased to announce the first European solo exhibition by Canadian artist Liz Magor. Gathering a rigorous selection of her works from the past 20 years as well as new works, No Fear, No Shame, No Confusion is an unprecedented presentation of Liz Magor’s work in Europe since her participation in documenta 8 in Kassel (1987). This solo exhibition opens towards a specific reading of her work through a dialogue with artists sharing a similar sensibility, interests, or processes. Three artists were commissioned new works and invited to present their practice in dialogue with hers: Jean-Marie Appriou, Laure Prouvost and Andrea Büttner, whose woodcut from 2006: No Fear, No Shame, No Confusion gives the exhibition its title.
Since the mid-1970s, Liz Magor has contributed a vast body of work across sculpture and photography exploring with measure and subtlety the layers of information shaping what is apparent in objects and people, how they reveal themselves, claim to be, or pretend. From her early ‘machines’that automatically processed mundane materials and produced sculptural forms, to her photographic series documenting historical reenactment groups in the early 1990s, she has sought to reveal how meaning can be concealed and generated, released and reproduced. Often referencing domestic environments, as well as exploiting

the belief that nature is the ideal or authentic refuge, Liz Magor questions the desire and sometimes compulsion for emotional and physical comfort, and the fragility of the human body and identity. The works gathered in this exhibition, some of which have been created especially for the occasion, are shown together for the first time and constitute a precise selection of sculptures from the past twenty years. Amongst them, her famous One Bedroom Apartment (1996), her ambiguous cast objects from the past decade, and her latest works on textile using found blankets, which through alterations, she has bestowed with attributes releasing parts of their history and temperament. Re-using, duplicating and transforming objects coming from a daily life that is already done consuming them, Liz Magor addresses their status and inconsistency, and reveals their anxiety. 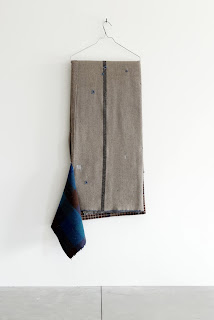 Born in 1948 in Canada, lives and works in Vancouver, Canada. 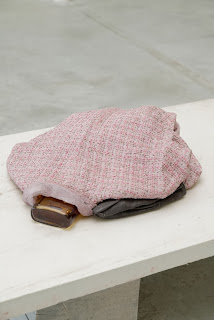