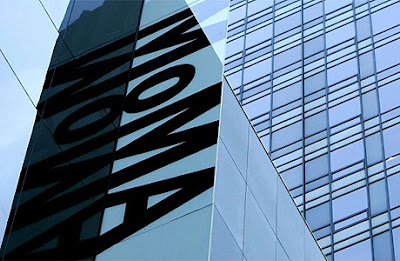 UPDATE: That was the April Fool's Day post, folks!


THIS JUST IN:
I briefly take some time, despite my raging headache and inability to hold my head up (I'm blogging from my bed with the laptop precariously perched on my knees), to let you know I have received the astonishing news, through separate and creditable sources, that following the Madoff debacle MoMA is in even direr straits that previously thought. A whopping number of Trustees have lost through their involvement with the ill-fated fund a combined estimated amount of $3.7 Billions, necessitating their imminent withdrawal from the Board. In addition, MoMA's endowment has endured a steep declined since November 2008, necessitating tough measures. Lay-offs are imminent, and bankruptcy is being hinted at, which would allow for MoMA to de-access up to 40% of its holdings (one of my sources referred to the collection as "stocks") without too much fuss, as Brandeis has already shown the way.

A last-minute attempt to get Eli Broad to prevent this unfortunate state of affairs has failed, Broad making no secret about having his hands full already in Los Angeles, and being slightly irritated about being perpetually taken for everybody's benefactor. Sources said he went as far as telling the Board "ask Lauder and Rockefeller, OK? I'm not the only billionaire left on the planet, am I?".

Previous discussions about raising the price of admission to the true cost at $75 were ditched, as the City , when approached, explained that if private institutions couldn't be expected to do a public service, where were we going? They were too busy making the MTA reforms palatable anyway, but if MoMA was to raise its admission tickets then the City would revoke its tax-exempt status.
It's really sad to contemplate such a fate for a museum that hasn't reached its first century yet, and if the rumors prove true then New York City will lose the jewel of its crown, one of its major touristic attraction as well. One of my sources was cautiously optimistic, saying that bankruptcy didn't necessarily mean closing the museum, and that a careful pruning of the collection, with a select choice of major AbEx and Pop Art pieces, would allow for a streamlined conduit of operations, provided that layoffs, a hiring freeze and a salary freeze for all personnel below the level of Senior Curator were to be implemented shortly. A Leroy Neiman retrospective curated by Thomas Kinkade is also envisioned, as the museum needs to host a blockbuster exhibition, while the design department has been asked to commission an exclusive edition of Beanie Babies from Jeff Koons.
Posted by Frenchy but Chic! at 4:35 PM

maybe all artist should donate!!
or buy bonus at wall street?
Its true that MOmA can't just go!

ChukChansigOldCasino said...
This comment has been removed by a blog administrator.
April 2, 2009 at 11:38 AM

CrystalHotelAndCasino said...
This comment has been removed by a blog administrator.
April 3, 2009 at 7:55 AM

EllisIslandCasinoBrewery said...
This comment has been removed by a blog administrator.
April 8, 2009 at 6:07 AM