Your Social Life Is Baaaaaack And So Is PRINCE 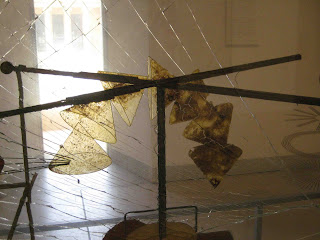 Howdy, readers! Whatever is left of you after I abandoned you to meet other deadlines and then go on a vacation in NYC and Philadelphia. Also, I crossed the Delaware where Washington did. Not being American, my feeling was "oh, that is indeed a large river. Who made that mediocre painting, by the way? You know the one".

I came back from this trip really liking the Arts Museum in Philadelphia, though I'd like their photography policy to be a bit less confusing. I went for the Duchamp and really adored their Modern collection (Brancusi, Mondrian, Jasper Johns, Barnett Newman, etc.)
In NYC I was  very dubious about the Picasso show and the "Malevitch will help us sell lottsa secondary market pieces, whoozah!" exhibition at different outposts of the Gagosian empire.
Picasso show was boring, but then being French I've seen craploads of Picassos in my life and I'm of the school who thinks his  output is more quantitative than  qualitative. The "Malevich " show had very few Malevichs in it, methinks they would be better inside museums than headed to some hedge funder's ugly Connecticut McMansion, and if the pieces in it by the likes of Richard Serra, Charlie Ray, Barnett Newman, etc. were all fantastic, the whole thing hardly constituted "an exhibition". It was really a commercial display and nothing else.

Hands down, my two favorite art things in NYC were the Richard Paul show at Theodore Art (and I'm not saying this because Stephanie is a friend) and the group show Proofs and Refutations at David Zwirner. It had a slightly funky look that was such a relief after all the sanitized things shown in Chelsea nowadays.

Most underwhelming show was Chris Marker  - who should definitively stick to filmmaking, and I'm a huge fan -  at Peter Blum. Overall, nothing exciting at all in NYC, though I passed the Glenn Ligon and the Lynda Benglis shows because they're both coming to LA and they're coming to museums that have a far better exhibition space than the Whitney and the New Museum, respectively.
One show I really enjoyed was the Africa Project at the Museum of Art and Design.

I also indulged my records-buying new addiction in Brooklyn, so if you are ever in the Greenpoint area, my new found loves are Permanent Records and Film Noir, which isn't exactly a record store but has several bins of very carefully selected vinyls on the floor. If you like Wombleton in LA, you will like Film Noir. Also very good selection at the local flea market on Sunday, which I will let you Google yourself because I can't remember the exact location.

And with this, let's go without a transition to what you're going to do with Your Social Life this weekend in Los Angeles.
Since I just got back I hardly paid any attention to what was going on, so let's focus first on the fundraiser for Outpost. A bunch of my real-life friends and favorite artists such as Edgar Arcenaux, Taft Green, Euan MacDonald, Mary Weatherford, Nancy Popp etc. have donated works. Tickets are only $20, it's between 5 and 7 PM  and everything is indicated if you click the above link.

Max Maslansky is opening at EGHQ on Saturday in Culver City. Yours truly is planning to re-enact the Entente Cordiale and meet the delightful Emma Gray, whom I only know network-socially™ ( a new adverb you will thank me I've coined when it makes it into the OED). Totally looking forward to the show.
Also on Saturday, I understand there will be a sound performance at Las Cienegas, only a stone throw away from EGHQ.

Also a sound-based video (well, it's more complicated than that, but there are lots of  experimental musicians  in it and some live DJ-ing planned) by SASSAS founder Cindy Bernard at LACMA on Saturday night, from 8 PM on. Scroll down the link for ticket info, etc.

That's pretty much it for this weekend, but before I sign off let me remind you that PRINCE is doing his 21-day residency at the Forum in Inglewood and if you've never seen him, it would be a crime to miss it! I'm going tomorrow and it seems a large contingent of the LA art world is heading that way too.
Posted by Frenchy but Chic! at 4:38 PM

Email ThisBlogThis!Share to TwitterShare to FacebookShare to Pinterest
Labels: Prince, Your Social Life