In conjunction with the Pacific Standard Time series of events organized under the leadership of the Getty, a performance and public art festival took place over the last couple of weeks in various Los Angeles institutions.
Now, performance art and public art are, IMHO, way too trendy in Los Angeles right now, and clearly not my cup of tea in general, so I wasn't planning to attend any of it. The only exception being the Welcome Inn Time Machine, organized by SASSAS on Sunday. If you don't know SASSAS already, their main focus is sound art and experimental art linked to music.
They've been active for a while and operate at a level where I'd love to see most non-profits work in Los Angeles: they're trying to do pioneering and experimental events while being linked to the century-long tradition of sound art, and they are also very conscious of the archival aspect of what they do, meaning they document all their events. The meeting of sound, music and visual art is really a fringe interest in contemporary art, unfortunately, because if you study its history it is not only very rich but also epoch-changing when it comes to historical movements such as Futurism or Fluxus, and I'm not speaking about the happy meeting of the Velvet Underground and Warhol, etc.


The Welcome Inn Time Machine took over an entire motel on Colorado Boulevard in Eagle Rock on Sunday, January 29th, from 4 to 10 PM. It was a rather successful event, as evidenced by the difficulty to park in a 4-blocks radius.  In accordance with the PST theme of SoCal artists in the Mid-Century (roughly), the events staged in various hotel rooms were re-creation of sound/dance/musical experiments originating in and around Los Angeles between 1965 and 1978, many of them influenced by John Cage who, incidentally, grew up a couple of blocks away from the motel. Kudos to the organizers because they had to coordinate to keep the motel empty, organize security, etc. Their hard work clearly paid off because around 1,400 people attended the event (and maybe more, it wasn't easy to keep track). It certainly was packed when I was there, between 5 and 7.30 PM. 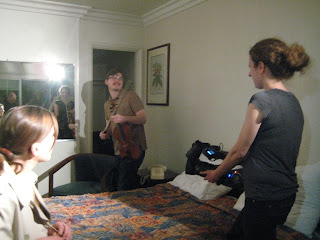 Here you have a musician from I believe the Calder Quartet about to set up for Bruce Nauman's Violin Tuned D.E.A.D. 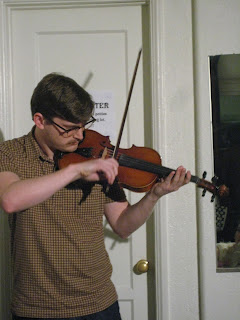 During the performance of the piece, the bow's horsehair started to come loose and untied. I have no idea if it's the result of the way the piece is played* or if it means the violinist hadn't tightened his bow enough, but he valiantly played on throughout. I tried to catch a picture of the horsehair starting to form loops around the bow but was unsuccessful. 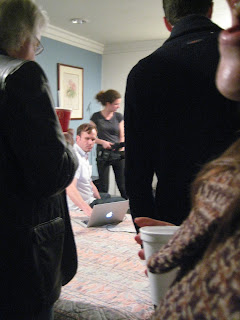 Here in the center is Scott Benzel performing John Cage's Variation IV in a bedroom located on the balcony, while downstairs Dave Muller was doing the same piece, but this being Cage, in a different way. 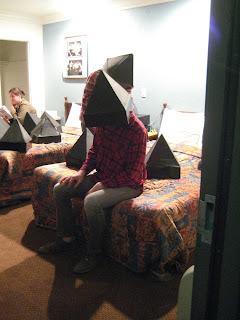 Pyramid Headphones from the Los Angeles Free Music Society. It was really fun to look at, the music/piece you could hear in the build-in headphones kept on skipping, and we wondered if it was part of the piece or an accident? If anybody from LAFMS reads it, please let us know! 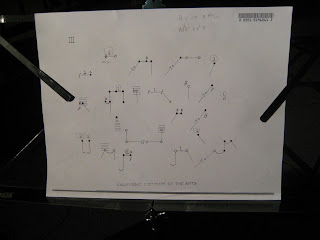 The Calder Quartet, a gem of a contemporary music ensemble, played and interpreted an unfinished piece left by Arnold Schoenberg after his death. This is the lovely graphic score. 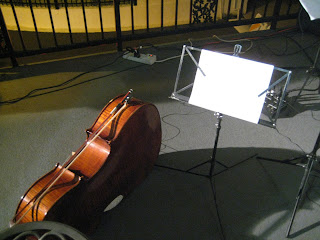 I missed a few things, like Anita Pace performing Merce Cunningham, not that I totally missed it but the space was so crowded - the balcony was at capacity - that I could barely see anything of it.
The one thing I didn't enjoy was the Something Else! ensemble freely performing Ornette Colman, because unfortunately Jazz is totally impenetrable to me.  They performed on the balcony and they nearly drowned what was for me the highlight of the evening, James Tenney's Postal Pieces. I wasn't aware of Tenney at all - he did perform the Satie Vexations with John Cale, David Tudor, John Cage and some other in 1963 - and I was blown away by Cellogram. Here's somebody else performing the piece at the School of the Art Institute of Chicago.

I was so enthralled by it I've spend some time looking for Tenney pieces on YouTube, and I leave you with my favorite piece of his below:


*if you've been following FBC! for a while, you must have noticed that not only I like music very much, but I actually know nothing about it. Yours truly has zero musical abilities, is tone deaf and cannot sing to save my life. Ergo, everything you read on this blog that is music-related is totally amateurish, and I am not proud of it. But hey, what can you do?
Posted by Frenchy but Chic! at 12:41 PM