More Love Hours Than Can Ever Be Repaid. - Ever.

I’ve always been puzzled at all the epithets hurled at you by the provincial critics in New York, the kind who had never traveled the world, let alone crossed the Hudson river.  No wonder they ignored your international impact and influence. There were all kinds of controversies going on in the 1990s, of course, and you were often lumped together with wildly different artists, but all in all your work wasn’t “scatological”, as I’ve often read, nor “perverse”, though I’d agree it is transgressive - intellectually and formally. There might have been five or six works where shit was involved, figuratively, out of a production that at the time must have reached a few hundreds pieces, and the works where feces where depicted were the logical and conceptual conclusion of a larger ensemble. Well, like shit always is, right?
“Master provocateur”, they say, and this I know you’d have enjoyed, but that wasn’t the aim, it was the result. Unlike younger artists today who thinks they have to be provocative at the expense of thinking out their work through and through, yours was designed to matter, intellectually and visually. You often introduced new shapes to do so, such as (in the early 1990s) the "blob", for lack of a better word, often made with chicken wire sprayed with rapid-setting compressed Styrofoam, and painted with slightly repulsive but widely available commercial colors, such as "puke pink", and a light brownish color you told me was called “fawn”, after which you joked you spray-painted Bambi colors. Rachel Harrison’s works own more than a passing resemblance to those sculptures you made referencing conspiracy theories alien abductions and fake repressed memory syndrome, a response to all the people who thought your work was about child abuse. Because your work was so complex and mixed so may different layers of meaning and references, people often clutched at straws trying to superficially grasp what is was “about”. From their own misconceptions, they leaped further and assumed you had yourself suffered an abusive childhood. You’ve denied it consistently, and because I knew you and I knew you never bullshitted anybody  -  it was a freaking waste of your time – I always believed you, besides, you would have never made work about it. But you ended up making fun of the rumors by making work about the “aesthetic abuse you had suffered in art school under formalist/modernist education”, which was totally hilarious of course, but also lead to such beautiful pieces as Educational Complex.
As time went by, your work became increasingly beautiful, in a roundabout way, since you never addressed “beauty” as an intellectual pursuit of yours, rather, for a very long time, what you made amounted, at least in my mind, to the conscious construction of an idiosyncratic anti-aesthetic, build of the constant flotsam and jetlag of American vernacular and popular culture. All the while commenting on the visual codes of modern and contemporary, but by exploring oft-neglected elements. When Surrealism was decried in  1990s art historical and theoretical circles as a mannerist, retrograde movement whose only output of consequence was photography, you claimed Magritte and Dali –those sellouts! – as a major influence. You were enamored of Peter Saul several decades before he got ‘rediscovered’. You wrote about Paul Thek and Öyvind Fahlström when they were everything but fashionable, keeping their flame alive.  When you made the stuffed animal pieces, they were primarily floor pieces responding not so much to Minimalism – for which you always has utter contempt – but to the process art of Barry LeVa.  Who, at the time, was almost forgotten in many art circles. I never told you how hard it was to find documentation on LeVa in France in the 1990s. 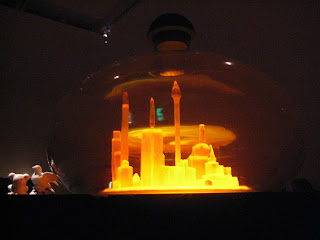 Mike Kelley, from the Kandors series, 2011 - photograph FBC!
What was challenging for your audience was that you were interested, as you said, in things that were superficially invisible to the culture at large, yet operating within such deep sub-levels that they could operate seismic shifts –whether we’d like it or not.  In this respect, you brought up to the surface the weirdest shit ever, Mike Kelley, and to make it more palatable to us, you’d wrap it up in your incomparable wit and humor.  You didn’t dig up “stuffed animals”, you hunted and gathered hand-made used, smelly toys and then, yes, stuffed them right under our noses. The first time I saw Craft Morphology Flow Chart, it stank. It reeked of urine, stale sweat, dirty old socks and that acrid smell of incompletely dried woolen fabric. Mostly, as I recall, it smelled of fear. It was a morgue, this installation, after you had decided to kill off the decidedly non-cute stuffed animals that were threatening to become your visual trademark as an artist. You were too smart to let your work reach a point of formulaic non-return, and you didn’t like your audience to mistake your visual vocabulary for a golden goose, so you killed it, and by doing so you expanded your exploration into death.  As G.B. said yesterday, a lot of your work dealt with death, the death of a culture, the death of ideas. Objects were dead things to you, and that celebrated essay you wrote wasn’t titled “The Uncanny”, it was called Playing With Dead Things.
You played. You mocked your own work. I mentioned the smell; you were so well aware of it you made another piece where clusters of hanged stuffed animals were displayed next to giant deodorizers, periodically releasing industrial-strength artificial scents. That stank worse than death, and you knew it. 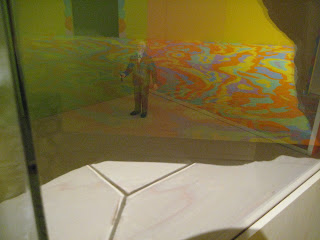 We’d rummage through slide documentations of old works, particularly the ones you had made in Australia, and you would tell me they didn’t exist anymore, and that if you had the time and opportunity, how you would like to remake them. You made me aware of cultural differences in a way nothing else could have, and you were always correcting whatever misconceptions I (and everybody else) could have about your work. No, you didn’t know about Marcel Mauss until after you had made the pieces about gift-giving, rather, you had been influenced by Mary Douglas, whom you had been made aware of by Dana Duff.  When I had said I thought the YBAs couldn’t have been made possible without you (and by this, I meant “being accepted as valid”), you correctly pointed out they were already making work at the same time, if not slightly earlier, as you. You told me a lot about the Los Angeles art community and history that was here when you came West, that unlike everybody’s misconception, Cal Arts wasn’t the only game in town. You were so curious, open and alert.  You were always so supportive, agreeing to be a reference for job searches for almost anybody who asked, writing support letters for grant applications, artist visa applications and other situations where it was critical you’d be here for your friends and your former students.
You gave us all so much, while probably not being aware of it. I am so sorry you decided to quit, because more than ever, your voice is being needed. I cannot blame you if you decided you couldn’t participate in the system anymore, but I am going to miss you a lot, and I am going to remain indebted to you for the rest of my life. More Love Hours Than Can Ever Been Repaid. Ever.
Posted by Frenchy but Chic! at 12:09 PM

Email ThisBlogThis!Share to TwitterShare to FacebookShare to Pinterest
Labels: In Memoriam, Mike Kelley

Thanks much, Noellie. This meant a lot to read right now.

Noellie, this is beautiful. I appreciate how you open your heart and mind here. Take good care. April