Heavy Scholarly Week Is Descending Upon Us 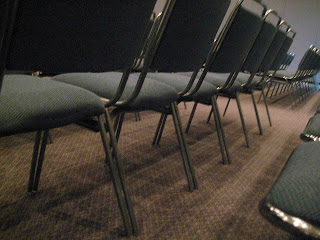 As some of you know, the College Art Association Conference is descending upon Los Angeles this week, with registration already in full swing earlier today. If you've been following FBC! for a while, you know how deeply ambivalent I am about the thing.
There are two things that give me the willies in general,  art fairs and  the CAA Conference. One, I do badly with crowds - I love everybody equally on this planet, but far, far away from me - and two, I do badly with people taking themselves way too seriously.
Now, I understand the need people have to network, and that it's convenient for institutions planning to hire future tenure-bound faculty to have a general cattle call HQ, but these being precisely what I'm trying not to do, I was to avoid the thing altogether, especially since I'm being too broke to devote money to sessions dealing with the stuff I laugh about usually (see that second link I posted above).

But CAA has elegantly showed they had no hard feelings against me  for making fun of them the last time around and kindly sent me a press pass; so yours truly is going to attend a couple of sessions and then report. I won't tell you beforehand where I'll go, I keep my identity vaguely secret (see "I abhor networking above", or more plainly "FBC! is a sociopath"). Also, I still have more deadlines so the whole thing is way too much, and I just realized today I had to re-read my undergrad nemesis, Stilfragen by Alois Riegl. If you've ever read it, you will understand.

The complete program of the sessions can be found here. Note that to attend, you need to fork over the $$$ to be a CAA member (which entitles you to a subscription to either the Art Journal or the Art Bulletin. I strongly recommend the latter, unless you get the level of membership that entitles you to both journals) plus the cost of attending the conference, or you can get some single-day or even single-time slot tickets. Everything is explained here. There is ONE session that is open to everybody, I understand (please double-check with CAA):


CAA Distinguished Scholar Session Honoring Rosalind Krauss
The Theoretical Turn
Thursday, February 23, 2:30 PM–5:00 PM
West Hall Meeting Room 502AB, Level 2, Los Angeles Convention Center
Chair: Yve-Alain Bois, Institute for Advanced Study
Harry Cooper, National Gallery of Art
Benjamin H. D. Buchloh, Harvard University
Hal Foster, Princeton University
Ewa Lajer-Burcharth, Harvard University
Briony Fer, University College London
Indeed, their website is super handy, so if you're interested in attending some of the conference just spend some time on the site, everything is well-explained. Things I recommend skipping altogether: the receptions, unless you have some alumni something or other going on and you're dying to see that asshole you were in graduate school with and who's doing so well at [insert Ivy League fab job here]. Also, do not, under any circumstance, try to eat or drink anything at the Convention Center. Instead, walk over to Hygge Bakery and raid their dark rye bread, hop on a DASH bus and explore the newish downtown eateries, whatever, but don't waste your money at such a ghastly place. Speaking of the DASH, if you live in Los Angeles and can conveniently bus yourself to the Convention Center, do so to avoid the super expensive parking.

Now, glancing at the program, I'm alarmed at two things. One is purely practical: FBC! still isn't ubiquitous, so it's impossible to attend everything I'd like to go to. Sorry, Rosalind Krauss and distinguished speakers mentioned above. The other thing is there seems to be a majority of modern-to-contemporary sessions in contrast to, say, Classical Antiquity, Medieval Art, Renaissance, etc. And many, many of these modern-to-contemporary sessions are dealing with stuff that has too many -Re and -Identity and -Body in their titles. Hey, art historians in the US of A, have you noticed the 1990s ended up with the century? Anything new going on? No? Oh well.
There are a bunch of local people talking at CAA this year, so check the LA Raw session chaired by Michael Duncan on Thursday afternoon, or the Seeing Is Doing on Thursday morning with Simon Leung, Andrea Bowers, etc.


Now, that is A LOT of scholarly things going on in LA. But, it's not all! On Saturday afternoon, and unrelated to CAA, Thierry de Duve will kick off a 10-weeks seminar on Duchamp at the Mackey Apartments/MAK. The whole seminar costs $140, or you can pay $20 per session (there's a deep discount if you are a member), but this Saturday it is FREE. From 3 to 5 PM, after this the sessions will move over to Mondays, 7 to 9 PM. De Duve is one of Duchamp's foremost scholar, so this promises to be interesting.

After all these scholarly things, I feel like everybody will need to look at real art. Let me remind you that on Saturday night, For The Love Of Mike at the Farley Building will be an event showing Mike Kelley's videos for 24 hours.  MOCA has also put together its holdings of Mike Kelley's works (some of them fairly spectacular) while LACMA has done the same with its own super meager collection (3 or 4 works at most.) Please go look at Mike's art and have a thought for him and for all the works he has left us.
Posted by Frenchy but Chic! at 10:05 PM