Mike Kelley Tribute Concert At The Box This Saturday 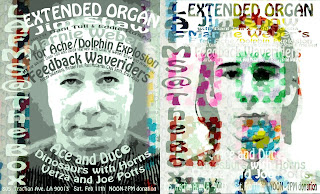 I would like to thank all of you who sent me very sweet messages after my very personal (and emotional*) post last week. I have been especially moved by the numerous former students of Mike who gave me their testimonies about how their whole lives has been touched by Mike's teaching.  I also came to realize that there wasn't a public outlet for everyone's grief. It is my understanding that per Mike own wishes, there isn't any public, official service or memorial to be planned.    I am not going to speculate about his reasons, I just decided to interpret it as Mike's way of telling us to organize ourselves,  and not to rely on, I don't know, some designated social outlet he would have hated attending himself. So it's up to us to remember him in what we feel is more adequate, and I cannot see anything better than the concerts and performance organized in his memory at the Box Gallery in Chinatown this Saturday. Please click on the photo above to see all details. 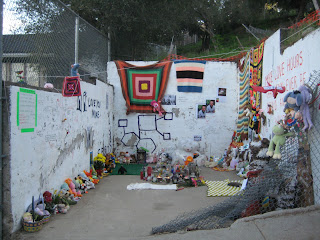 If you need to leave tangible manifestations of your appreciation for Mike somewhere, there is the makeshift shrine in Highland Park on Tipton Way, that seeks to recreate his More Love Hours Than Can Ever Be Repaid/The Wages Of Sin (1987). It's on Tipton Way, way up the hill on your left. If you decide to go, please respect the neighbors and come only between 8.30 AM and 10.30 PM. Be careful not to place candles near flammables. 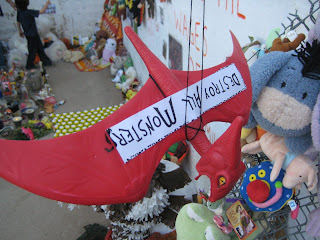 It is a wonderful place to go, as people chose to put objects and inscriptions pertaining to whatever part of Mike's work touched them. Above, a view of a "Destroy All Monsters" dragon. I especially like that the "shrine" appropriates Mike's uncovering  of vernacular culture to revolve it full circle;  and make use of that secular gestures people have in the US of depositing teddy bears and flowers in public places in the memory of the recently departed. 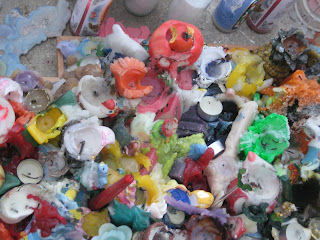 It's raining today and likely all the blankets and the stuffed animals are going to get soaked, then dry up and become smelly and dirty... which is exactly how Mike would have wanted it! 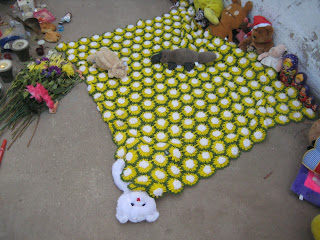 This is a blanket and platypus contributed by yours truly, while the other two stuffed animals (the ones not in the row near the wall) have been donated by the Alexander-Crosby family, Andy Alexander being a former student of Mike.  The lovely thing about this memorial shrine is that within 30 minutes of being there, I've met with quite a few people who I know were close to Mike. More blankets were added as I was leaving, which is good as there are already quite a large amount of stuffed animals, but maybe not enough blankets.
Special thanks to whoever organized the Mike Kelley shrine. I think Mike would d be pissed off that I call it a shrine... but I don't really know what else to call it.


In the next few weeks** I am going to talk to you about two different projects started by formers students of Mike, Andy Alexander with werk.by and Jennifer Moon with The Revolution. Both are projects that try to engage the art community as a locale for  collective reflection and action, and to shift the discourse back to what an artistic practice aims to do, as opposed to "having a career and making it in the art world". Many thanks to them for bringing us back to reality.


[I've just been reminded that many artists make work because they enjoy making work no matter what, whether they get recognition or not. It should go without saying].

* I was crying my heart out while writing the post, I had a migraine on top of it so I couldn't wear my glasses. And I had written it on a Word. doc format, which fucked up mightily with the html when I pasted it on the blogger interface, hence the crappy editing and weird formatting. I still can't read it now, so this post is going to stay as is in all eternity.
** I have a few deadlines coming up, so posting will be very irregular. Sorry about that.
Posted by Frenchy but Chic! at 11:19 AM