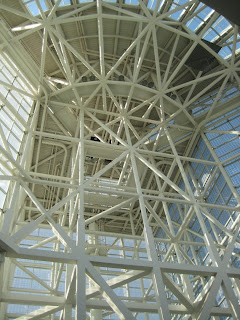 The LA Convention Center, Picture Copyright Your Truly
A few years ago I went to the College Art Association Conference in downtown LA and I didn't relish the experience. After being issued a press pass for the latest edition (roughly from Wednesday morning to Saturday evening last week) I went there hoping my opinion would significantly alter, alas, this was not to be.
First, let me get this out of the way: I am not enamored with Academia in any form, and even less in its American incarnation.  So everything I'm writing below is anything but impartial, obviously.
Aside from this, spending several hours locked into a stuffy, dark room watching dull presentation after the other on super uncomfortable seats isn't my idea of fun. But, I do like the spreading and sharing of knowledge, so I was wishing I might learn something or other. What I got from the conference can only be summed up this way: the next generation of art historians is as boring, dull and predictable as the last. And they seem to spend even less time looking at art than wondering if it fits their predetermined categories. There are still too many people trying to RE/something or other (-framing, -locating, -hashing...) rather than, I don't know, JUST DO IT anew or afresh or for the very first time, I don't care, but for the love of the Holy Mother of Belphégor, please, please young scholars and artists, stop RE/ anything. Thank you.

Now, to be fair, it was difficult to pick and choose which sessions to attend, as many were scheduled at exactly the same time  - so, for example,  I spent the entire "bad art" sessions cursing myself I hadn't attended the "Nazi paintings" instead, etc, etc.
From what I heard and have missed, the Rosalind Krauss session was great, and so were the artist-lead ones, especially the Martin Kersels one which I understand was LOUD to the point other sessions panelist came to protest. Way to go, Martin Kersels, I'm sure the Holy Mother of Belphégor will bless your heart!
What else was great at CAA? The book fair was fantastic, and yours truly scored with 4 books including 3 deeply discounted ones at the DAP booth. I highly recommend the Martin Kippenberger biography/portrait by his sister, I've only read about 50 pages so far and it's beautifully written and translated, and super interesting. Also, the guy who sold me the "artists publications" at the MIT Press booth was way cute (hi!) and the kids at Cabinet, my other favorite publication (if you ask, the 2 other ones are Triple Canopy and The Quietus) managed to be even more cranky than I was, a feat on any given day.
I also have to report a big progress from 2 years ago: there are far fewer men with the  "totally shaved head + goatee" look, so hopefully in about half a decade this remnant of last century's men fashion will have disappeared, yay! 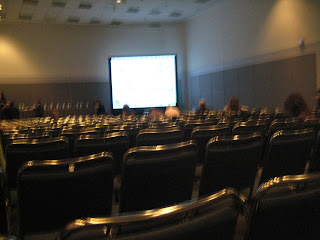 Not much rock' n ' roll
I went to a grand total of two sessions. I was planning on four but my goodwill was easily defeated by the general mediocrity of what I've seen. Also, while I'm at it,  whining that is, I want to denounce the extortionist $3 the Groundworks coffee cart sold its very mediocre espresso for. It's not every day I think I'd better have gone to Starbucks, and it was such a day. If you're ever stuck at the LA Convention Center downtown, I highly recommend you take your coffee and pastries business at Hygge bakery instead, get yourself a nice coffee while having a chat with the super friendly Lucas, and stock on their fabulous rye bread.

So, the sessions. As I was saying I went to the "bad art" one, which dismayed me for several reasons. The super adorable girls (they looked like they were 14 to me) who chaired the panels quoted Susan Sontag and her essay on camp, but didn't actually challenge it at all. It would have seemed a basic thing to do to me, but apparently the young generation likes to receive its texts uncritically.
Then the panelists proceeded to read their notes and be incredibly obsessed not with defining what "bad art" was (for whom? who gets to decide what's bad and what's not?) but to wonder how to make some of it "fit the canon" and why some of it didn't.
None of them actually presented and researched their examples of so-called bad art on their own terms (the first panelist did a half-baked attempt at describing his Neil Jenney paintings and that was it), but tried instead to see how they could make them fit their predetermined categories. There was some tired rehash of "the avant-gardes versus postmodernism" and overall lots of beating about the bush and not much treating of the subject (and much "trying to fit my doctoral research into the general subject" feel).
I was wondering for a while whether someone was going to raise the fact that many defining artists in the established corpus of art history at some point of other produced work that was deemed bad art at the time or even a long time after it was made (from Caravaggio to Duchamp via Courbet, Manet, Picasso to our very own Mike Kelley) and that maybe, maybe there was something interesting in this process...  And nothing came up.
Likewise, one panelist who talked about illustrators-as-artists with, among others, Norman Rockwell and Thomas Kinkade  (no mention of Currier and Ives) was speculating that so-called lesser art was finally deemed worthy of museum interest (his benchmark for acceptation of "bad art" within the corpus) if and only if there was an "original" model/art piece showing good workmanship that could be shown instead of reproductions; and that in the case where only mass-produced objects existed, the originator of the work wouldn't be recognized as an artist, ever. I waited in vain for Walter Benjamin's name to be uttered.
This session was packed, incidentally,  which made me think that the people attending graduate school in art history these days are fed up with the modernist and post-modernist narratives they're being spoon-fed by their faculties, and would like to do something else. They're trying hard, but they only manage to replicate what they've been taught. I can't blame them for this, because they're being part of a system that offers very little in terms of being able to challenge it, and because it's difficult at this stage in one's career to know what one is doing. I certainly didn't when I was a graduate student myself. I just was a truant and left Academia forever.

The morning after I was so shot and discouraged I didn't manage to hurry to catch my bus and attend the "punk rock" session, to my deepest regret. I always regret not attending sessions because, you know, the grass is always greener...
So I went to the "rock' n' roll" session  in the afternoon(I think it was called "toward a rock' n' roll history of contemporary art), with the two Chairs doing passable interpretations of a Devo listener and a mumblecore fan, respectively. Just the fact that "rock' n' roll" (as well as "punk") made it into two CAA panels indicate two things to me: a) both musical genres are now totally dead and b) maybe they cannot produce good art history but the young 'uns are sick of the stalemate in their own discipline. Occupy your faculty!

James Chance and The Contortions, I Can't Stand Myself

Where was I? Ah yes, the session. First speaker did a formal comparison between Robert Smithson' Spiral Jetty and the Rolling Stones Altamont disaster, based on superficial resemblances between SJ and the Gimme Shelter movie, on the fact that Howard Junker had written an article about the 2 in a 1971 Rolling Stones magazine issue, and that Robert Fiore, who was Smithson's cinematographer on SJ, also worked on Gimme Shelter. Also that Smithson was a fan of rock music and read lots of rock music magazines (and I hate to break it to that guy, but so did most artists of the time and then some more. Dan Graham was a rock critic, for example). It's one of those paper where you see the starting point but you don't feel like it's going anywhere.
The next speaker is the person who's single-handedly responsible for my flight from CAA. The paper was on the NYC no-wave movement,  a musical instant in the 1970s I'm very fond of. Lydia Lunch, James Chance and the Contortions, etc. At least she was about to talk music, I thought, so maybe I was going to learn something. Alas, this person was so incredibly arrogant, condescending and reeking of self-assured pomposity I couldn't take it anymore: "And I posit and I am going to affirm and I will prove". One bad Springsteen joke was lost on the audience, which was all for the better because the speaker was of the kind you imagine peppering all their Facebook and Twitter conversations with *sarcasm* and *irony* after each post. There was so much intellectual superiority I could take, so I left, and I was suffering from such an allergic reaction I didn't come sneak into the Rosalind Krauss session, which was my initial plan. Instead, I bought a shitload of books and went back home. And nearly had a panic attack, so now you know.

Outside of CAA, one thing that redeemed my scholarly experience last week was going to the Thierry de Duve seminar at the Mackey/Schindler house on Saturday afternoon. I had a raging headache, but de Duve is so clear and concise I managed to follow everything he had to say. I'd gladly come to the rest of the seminar if I could, but I have too many deadlines coming up and I'm broke (I just discovered that street cleaning parking tickets went up to $68, wow!).
If you have the time, each session is $20, and only $10 if you're a friend of the MAK center, plus if you buy the entire series before 03/12 it is deeply discounted. You're going to learn a lot about Duchamp, and de Duve is a super nice man who's not intimidating at all, so all questions are always welcome (and answered). Just make sure they're not too long-winded.

And lastly, what about this back ache I mentioned in the post title? Well, after 3 car accidents between 2007 and 2009, I have semi-chronic back pain that become worse after a prolonged seating position. So now you know. Can hardly move this week, so my art activities are severely curtailed until I can resume driving. More posting later, hopefully.
Posted by Frenchy but Chic! at 6:39 PM

Unfortunately it is now pretty much impossible to get into a doctoral program in the History of Art because the faculty will only admit those candidates who won't ask questions or counter points but will instead provide unpaid and uncomplaining research, labor that the professors will then co-opt wholesale rather than do their own work. Grad students are just the symptom, not the cause.

I hear you, and this situation isn't new whatsoever - as far as I remember it was the same when I was a graduate student, and it was probably worse before that. I basically shot my own academic career in the foot when I decided to do my dissertation on Mike Kelley and had to find a supervisor far outside from my own faculty, which also meant waving goodbye to any kind of financial aid from my university. But maybe graduate students could use the CAA Conference to present papers about what truly interest them, and try to look for methodologies outside of what they're being force-fed at school?