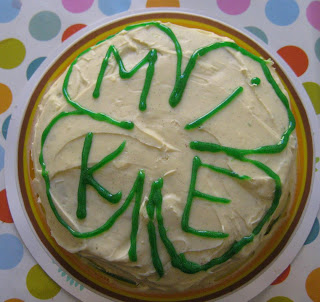 I recently made the cake above for friends who came over wanting to reminisce about Mike Kelley. It's basically this cake,  topped with cream cheese icing, and LOTS of green food coloring dumped into the batter. It was surprisingly good. You can also see from the picture above I lack fine motor skills and cake decorating abilities.

Today for the first time in my life I'm celebrating St. Patrick, for the first time because I don't have an ounce of Irish blood in my veins, I'm not even catholic, and I don't like beer. Irish whiskey will do nicely, thank you. I'm really celebrating in Mike's memory, because he loved St. Patrick's Day and I guess from now on, for me it will be National Mike Kelley Day forever. And for you too, if you wish. Kelly green is really Mike Kelley Green. 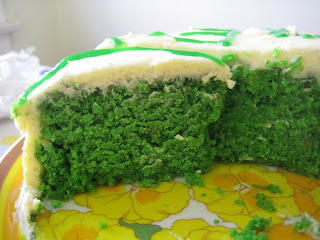 Here are below a sample of Irish bands that are not U2, if you need some musical accompaniment to the day. Also, if you wish to bake some dessert today, I recommend this recipe. The smell in your house will be totally insane. As for drinks, aside from the ubiquitous Guinness and Murphy's, I suggest you sample the Irish single malt they carry at Trader Joe's. Much better than Bushmills and slightly cheaper!


The Virgin Prunes, Down Memory Lane:

The Undertones, Here Comes The Summer:


And that's all for the Irish music sampler today.

Before I leave you celebrating National Mike Kelley Day, a few things. There's an opening tonight at Richard Telles, a group show that looks very interesting.
There are a few things that should be coming up on FBC! in the next few weeks, depending on where I am with the shitload of non art-related paperwork I have to do;  and also depending on how my back pain is evolving. Right now, it's not looking too good,  so I'm not sure how much posting I'll be able to do.
I intend to write a double post on Jennifer Moon and Andy Alexander's current projects, also to write something on the Mono-Ha exhibition at Blum and Poe. There are several interesting things coming up in the next few months, like the Jennifer Moon solo show at Commonwealth and Council in mid-April, and the Will Fowler one at Kordansky in May. Also, as you may know there's a new Biennial coming up at the Hammer/LAXart, etc. with a big cash prize attached, not that I care about that part, but since I have quite a few friends whose work will be featured in the Biennial, so I'm crossing my fingers for them. And, the event everybody has been waiting for: the Jack Goldstein retrospective at OCMA opens on June 24th. Don't miss it!

Lastly, I've been asked recently if there was a Facebook page for FBC! The answer is, no, and I don't foresee one in the immediate future. This blog was started as a personal outlet almost 5 years ago after a devastating car accident, merely as a way for me to fend off the boredom during the many months that recovery took. It's not a way for me to "make it into the art world", as too many blogs - mainly based on the East Coast -  were created for,  just a way for me  to get some personal writing out once in a while. If it touches some people, I am glad, but I don't want this to become a gigantic piece of work, especially work that doesn't bring in any income. It's just a space for me to have the freedom to write whatever I want, and as stated in the header, it's unresearched and un-edited. Warts and all!

If you would like to keep in touch with updates, I believe there's an RSS Feed button somewhere (I don't use RSS myself, so I have no idea if it works or not), and I use the Networkedblogs app. to import it on Facebook. If you don't want to use these, I'd say just check in once or twice a month to see if there's an update. It's very rare that I update more than twice a month anyway.

Happy National Mike Kelley Day everybody, and happy pagan Persian Norouz to all as well!
Posted by Frenchy but Chic! at 3:14 PM