The Rock Negotiates A Turn On Western & Wilshire

Someone posted this very spectacular video on YouTube. The music is freakingly annoying, so I recommend you turn off the sound. The turn is very spectacular. I guess the video must have been taken from the Solair building (?).

I went to meet friends at LACMA yesterday, the talented photographer Tad Beck who currently has a show at LACE, and his husband. Also got the opportunity to meet the artist Jesse Aron Green, for a pleasant mid-afternoon break. Of course we went to see that giant stupid rock, and the trench. That's when I realized that Levitated Mass was going to look like a phallic (yet squat) thing resting atop a very long and narrow... slit?
See below a couple of pics I took at LACMA yesterday. 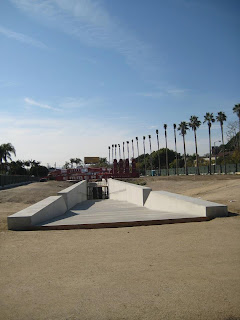 the trench,  with the rock in its carrier in the background
So, from my point of view (contrary to the nice commenter who was discussing the cost issues with me a couple of posts below), it's not a particularly compelling artwork, but what makes it interesting is really the truly epic journey it took from Riverside to Los Angeles - a journey that isn't part of the artwork for Heizer, according to a recent Michael Govan interview in the LAT.
What I find touching about it is how so many people went to see the rock at its various resting stops throughout its slow trip through the Southland, stayed up all night along the route to try and glimpse it, and how 20, 000 people went to see it and spontaneously block-partied for it in Bixby Knolls/Long Beach.
As the rock was being carried through many very poor areas of Los Angeles, the population that came to witness its trek was in many cases one that isn't, usually, in contact with art at all, whether it's contemporary or else. I don't know if the same population has the means to actually come visit LACMA when Levitated Mass is finally completed and unveiled: many of these people don't own cars and might not be able to take very long bus rides to come from South LA to LACMA*


Which made me think that maybe LACMA could try and find some funds quickly for an outreach effort, maybe offering free entrance to its galleries the day Levitated Mass is finally completed? Perhaps some generous donor could also pitch in and fund buses rides from South Los Angeles and back to let the same people who stood in awe following the rock's itinerary experience the full art experience at  what is, in essence, a public institution, the County museum**.  I think it would be a really great way for the museum to express some thanks to all those people it never gets to truly serve and who instinctively expressed support for a form of art that is normally outside of their daily thoughts. Mr. Govan, I think it's time you should call the Resnicks,  the  Wallis Annenberg Foundation, or any donors you think would gladly underwrite such an event. 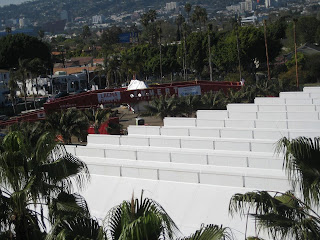 The rock in its cradle, with the Resnick Pavilion in the foreground, I took this picture on top of the staircase at BCAM
* I used to drive surface streets from Long Beach to Mid-City in Los Angeles, essentially taking the same route as the rock did, save for the last mile and a half. Depending on traffic it took between 1 hour 15 and 2 hours. The same one-way journey by bus would easily take almost 3 hours, even with Metro's rapid buses.
** Many people tend to think that because LACMA is "the County museum", it is entirely funded by the taxpayers. It isn't. Only about a quarter of the museum's budget comes from public funds, everything else has to come through private and corporate donors. It is located on County land, yes, land that is unusable for other types of construction because of the tar pits. Imagine the outcry if the County had tried to build a hospital or an elementary school on soil that emanates tar fumes all the time.
Posted by Frenchy but Chic! at 4:47 PM