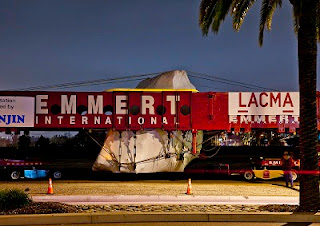 As far as FBC! is concerned, usually "rock" is primarily a type of music that is prevalent in our household, and, secondly, er, natural formations I never really think about, since I stopped collecting ocean-washed pebbles sometimes before I reached my first decade.
But if you live in Los Angeles, and maybe elsewhere, you may be aware that in just a few days, a Michael Heizer piece, Levitated Mass, will be finally achieved/completed at LACMA, after one part of it, a gigantic boulder, will have ended its journey from a quarry  a hundred miles away to be finally positioned atop a concrete trench on the museum's premises.

I've heard a bunch of complaints about the cost of the project, how it could be better spent elsewhere, etc. So, to lay matter to rest, I just want to remind everybody that the museum spent about $70,000 on the boulder/the rock itself, and that most of the massive rumored costs of $10 millions for the piece are in fact devoted to transporting the rock from its quarry in Riverside County to Los Angeles. Moreover, these are picked up by the company undertaking the move, Hanjin Shipping, a Korean shipping company; it's not even a private foundation that could, I don't know, fund  a children hospital or whatever. Maybe they donate the money and their expertise to experiment with what can be done, but it's not as if they were diverting it from a cancer research fund, and I'm not sure they can actually get a tax write-off for that (since they're foreign).

I don't really know how much the museum spent on building the trench, but as far as having a spectacular artwork in its collection, it cost far less for LACMA than, say, if it were to acquire a gigantic Murakami piece. For the very many non-art people occasionally reading us, there are tons of useless projects that cost tons of money that should be devoted to useful things and nobody ever raise a ruckus about them. From the top of my head, I'd say the Academy Awards Ceremony, any Thanksgiving parade, or whatever is invested into Republican super-PACs is as useless as a gigantic rock atop a cement trench, so please give us art people a break and go complain next time there's a Super Bowl half-time mediocre singer playing that the money would be better spent caring for abandoned horses in Montana or something.

Now, what do I personally think about this particular project? Honestly, I don't give a damn, but I'll likely come and take a pic of the trailer/truck/red toy when it arrives on Miracle Mile. I have nothing for/against Michael Heizer, even though I think that type of spectacular "land art" (in an urban setting) is getting a bit tired. But if it gives LACMA some publicity, good for them.

Now, what do I think about the money spent? Well, I'd rather some sponsor would step in at LACMA and gives them 10 millions to actually augment their collection with art made either by Los Angeles artists, or artists originating from here.
LACMA has "Los Angeles" in its name, unlike MOCA and the Hammer, and I think its duty would be to put artists from the region in their collection, which is pitiful in this regard. The gaps there are from the generation that came in prominence on the international art scene from the late 1970s to now are problematic, not only because many artists are missing, but also because when there are represented, it is very often with minor works. So, if some corporate company - you know, the ones that have feelings because they are people, too- would step and donate money for the museum to buy exclusively art made by artists either working there or who had formative roots in the region, it would be a fantastic act of real philanthropy.

Meanwhile, I do have a beef with LACMA spending $10 millions (of private money, again) on trying to see if Jeff Koons' detumescent choo-choo is feasible. I am very sorry, Michael Govan, but if there is a phallic, detumescent, gigantic mechanical sculpture to be made on LACMA's campus, then why don't you ask Paul McCarthy to do it for Chrissakes?
Gee, that would be the natural thing to do in Los Angeles, Mr. I-believe-I'm-in-synch-with-the-Los Angeles-art-scene-because-I'm pal-with-Jorge-Pardo. There are so many great LA artists who could benefit from special commissions (say, Liz Larner, Marnie Weber, Ken Gonzalez-Day, Mark Bradford...) or simply whose work should be acquired ahead of, say, Ai Weiwei or Christian Marclay. I have nothing against the latter artists, but I've heard over and over again out of town visitors wondering why there was so little art from Los Angeles presented in our local museums. I sure hope the recent spate of exhibitions linked to the Pacific Standard Time project will make a significant change, that is museums are going to try and augment their collections rather than only stage temporary exhibitions.

One last thing about Govan's series of outdoor projects at LACMA: I hate to break it to you, but there is actually one piece by Barry LeVa in your collection that isn't merely a work on paper. It's a sketch/blueprint for a gigantic broken glass piece that the museum could realize if it wanted to*. Because you know what? It belongs to the museum.  Have your assistant research "young talents award" if you're unsure. No need to get funds to buy it, just find some corporate glass maker to donate broken glass (on the top of my head, I'd say a US subsidiary of French glass maker Saint-Gobain, but maybe Corning or Anchor King or Pyrex or whatever would be happy to donate), use your museum manpower to lay it, and voilà, a giant, wonderful piece by Barry LeVa to be enjoyed by all.
Nobody will accuse you to pander to the art market, local collectors' big egos, or spend way too much money on out-of-town artists (because, as I'm sure you know, Barry LeVa might be living in NYC but he's actually from Long Beach).
No, don't thank me, my pleasure. I love telling local museums when they have great pieces in their collections.


*It's my understanding it should be an outdoor piece, but I may be wrong on that count.
Posted by Frenchy but Chic! at 3:56 PM

Thanks for your article. Interesting point of view from LA. I like the part of your text speaking about the $ 10 millions and all these others ways to save money. Very good! And obviously necessary because, clearly, most of the haters are not very honnest on that point.

- About the boulder, the piece was purchased not by LACMA, but by the artist "with the help of private funding" (see LA Weekly) —and coming from the Lannan Foundation I can suppose. More sure, Danny Johnston gave him a call for the first time in 2006 about the rock (see LA Times, Deborah Vankin last tweets).

- About the (hated) $ 10 millions, it includes the transportation AND the building of the trench of course. Easy to figure out that only the transportation can't make the full bill. (this information mentionned in the article "where's the Rock?", on Zev's blog, if you don't already know)

- About the private donors, LACMA is perfectly clear on its FAQ (on line since a few days):
"Levitated Mass was made possible by private gifts to Transformation: The LACMA Campaign from Jane and Terry Semel, Bobby Kotick, Carole Bayer Sager and Bob Daly, Beth and Joshua Friedman, Steve Tisch Family Foundation, Elaine Wynn, Linda, Bobby, and Brian Daly, Hanjin Shipping Co., Ltd., Richard Merkin, MD, and the Mohn Family Foundation, and has been dedicated by LACMA to the memory of Nancy Daly.
Transportation is made possible by Hanjin Shipping Co., Ltd."

- About Michael Heizer, he is born in Berkeley. He's not really a "boy of LA" but not so far if we consider the scale of USA, and even maybe the scale of the world given the size of his huge earthworks in the Nevada Desert. So it's quite a normal thing to see in LACMA's permanent collection a piece made by this great artist, maybe one of the best of XX/XXIe century. But as usual, like many painters of the XIXe, his masterpieces will take time to enter in the history.

Currently, we curate with my partner a transatlantic action to pay tribute to Heizer. Feel free to visit our website: www.landart.fr
A Frenchy point of view on a typical American Art (Heizer's dream since the very beginning of his carrier)

All my best
Marc de Verneuil

well, someone in France could think being born in Berkeley makes Heizer a local artist, but it would be like saying someone in Toulouse is local to Marseille. Or that a born and bred Parisian is local to Reims because it's not that far.

As for the rest, I'm neither a fan nor a detractor of Heizer, but I stand by my contention he's by no way local and LACMA should invest more money, regardless of where it's coming from, in Los Angeles artists. Their holdings of Mike Kelley, Jim Shaw, Pettibon, McCarthy and more recent LA artists are pitiful.

I don't really know that the full 10 millions don't make most of the bill, if not all of it, because there has been a bunch of road construction and other issues that cost a bundle, plus paying all the salaries of the crew that must be raking massive overtime just to follow it.

The Transformation campaign has been on for years (it's for the construction of the campus), not specifically for this project, so donors named on it may not have had specifically chosen to support it but might have donated "at large". I don't really know, and I don't really care. My point was that no public money had been spent on it, so it's not as if a public hospital had been robbed of public funds.

Lastly, I'm not sure the Lannan Foundation still donates to art causes, does it?

Yes, I understand your point of view about the dialectic local/global and, of course, Berkeley is not LA. I nuanced my response but maybe it wasn't so clear. So, we may rather speak about the "Boy of California", or the "Boy of the western USA" :)

Maybe you are right about the selection of artists by LACMA but it seems to me that Heizer's work is special. Govan know Heizer, of course, and it helps, but I'm sure that if it was a Dannish or Dutch artist who have built Double Negative, Govan do the same choice. Levitated Mass is a very important work according to me and you are lucky to have it.

About Lannan, as far as I know, they continue to give grants on 'City'. But maybe you have more accurate information. I will check that.