Pictures From Jennifer Moon's Exhibition At Commonwealth and Council

It's been a while. And it's going to be a longer while as well since I'm working on some deadlines and other stuff right now, meaning I don't really have the time to actually go out see exhibitions, let alone write about them. I've seen a grand total of two shows over the last few weeks, including the Jennifer Moon show at Commonwealth and Council I had mentioned previously. I actually went twice in order to try and take decent pictures, and I failed miserably. So please find my crap pictures below, and if you want to be updated on Jennifer's work, I suggest you "like" the page The Revolution on Facebook. 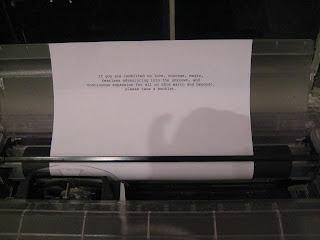 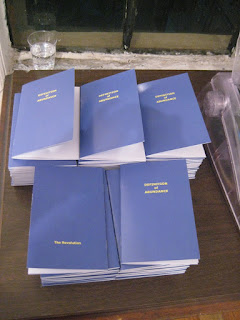 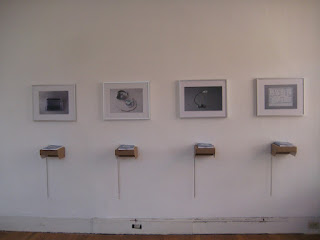 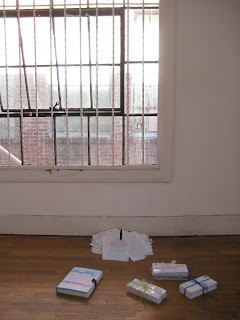 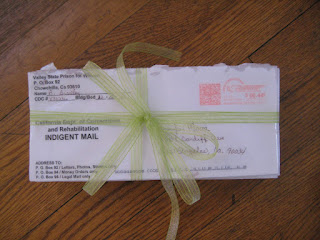 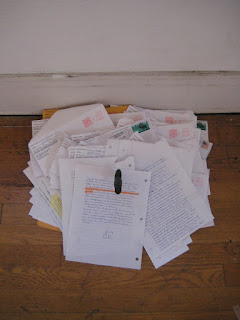 Jennifer Moon's show at C&C was the first step in a larger project, documenting a moment of self-discovery while doing prison time for a failed robbery a few years ago. After being led astray form her career path as an artist by drug use, Moon's experience of incarceration led her to recovery and the desire for reforming society. She then worked to design a peaceful, loving series of models and systems to build an expansive and self-aware revolution. The first step on this path is explained in the free blue booklet you could have picked up at the gallery, "Definition of Abundance". It has great footnotes, BTW, and if you wish to be enlightened I think asking for a booklet via the Facebook fan page for The Revolution should produce some result.

At C&C the viewer could look at photographs of various objects related to prison life ( a typewriter, a CD player,  a picture of a necklace given by her prison lover, etc.) as well as a book describing what it was like, with each object documented in the book. In addition there was the rather large correspondence between Moon and other people, which you could browse if so inclined.

Moon's work has been  marked since the beginning - but with a 10 year hiatus -  by an idealistic stance for self-improvement leading to a community-based utopia of worldwide reform: from wanting to become a super-hero at the service of humanity in the 1990s, to devising today a new utopian society funded on principles of sharing resources in a world that has seen an exponential rise of inequality. Follow Jennifer Moon's artistic path and for all you know, it might take you to a new society.
Posted by Frenchy but Chic! at 6:06 PM