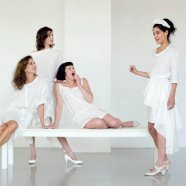 There's this on Friday evening at LACMA. Who doesn't like free access to culture? If you can't be arsed to click on the link, lazy you, it's a live performance of a piece by the late Guy de Cointet*. He was a French artist established in Los Angeles, died in 1983, and has been slowly rediscovered over the last 15 years.
So if you have no plans for Friday night, head over to see some cool exhibitions  like the Women Surrealists (it's free after 5 PM for LA County residents), have a quick bite somewhere and attend the 8 PM performance. Everybody I know who's seen them say they were great.


*who, contrarily to what his French proponents like to believe, didn't particularly influence Mike Kelley, even if he liked them very much. Mike said he only saw de Cointet's stuff in the mid-1980s when they were re-staged at MOCA, after he's been doing performances himself for several years already.
Posted by Frenchy but Chic! at 4:23 PM