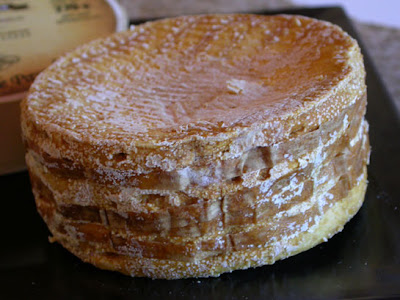 Sorry for not having given much news lately, as I've been busy prepping and packing up to soon go back to the land of stinky cheeses, disgruntled voters, imperiled health insurance system and workers on strike. Wait a minute, sounds like here, sans les cheeses!

Well, I'll let you know if France becomes more like les USA under our new omnipotent, egomaniac, freshly-divorced Sarko 1er. If you read the NYT and the WaPo it seems like the op-ed writers' dearest wish, though if you ask me I'd think it would be better if the US was becoming more like France, you know, health insurance-wise, cheese-wise (cela va sans dire) and vacation-wise.
In passing, I doubt working op-ed journalists are reading FBC! but if they do, please spare us grotesque affirmations such as: "the French voted for Sarkozy because he loves America where he spent some time as a youth, therefore the French want reforms so to become more like Americans".

Well, last time I checked my fellow countrymen were still violently against Les Ricains, they voted for Sarko because they are misogynist dumbasses and our own Liberal (only in name) party is in shambles, but more important than this, let me switch that sloppy rhetoric around.
Let's imagine, say, John Edwards is elected president next year. How would Americans react if some French newspapers were to print stuff like: "Edwards like French cheeses, that's why the American people elected him, because they want to be more like the French". Sounds like a super-legit reason to be elected, eh? And, you know, Chirac did love America and did a study-abroad year here (I think Princeton but I'm not sure). For all I know Americans love ketchup and did it help Kerry to get elected? I thought so, too.

Anyway, back to the topic. I'm leaving tomorrow but I'm not sure I'll be able to post frequently for various reasons. I tend to spend lots of time caring for the very elderly members of my family when I'm back home, and also I've butchered my left hand badly with a paring knife and it tends to bleed profusely each time I move my fingers too much. A bit awkward to have blood splattered on my laptop, I must say. I also would like to work more on my novel and less on the blog, frankly.
I may post pictures that are food-related, and if I get to see a show or two in Paris I'll post, but I haven't found shelter there yet so I'm not sure I'll be able to do anything but last-minute shopping.

So, in the meantime I'll let you check the website of a Polish artist who's very good and also lots of fun in person, Joanna Rajkowska. She does work that is politically and socially conscious while being fun and engaging visually. Lots of it has to do with Polish identity but tackle issues that make sense universally. Please check her work, and don't hesitate to curate her work anywhere you see fit!

I'm also sorry to see the negotiations broke down between the WGA and the AMPTP. Let's support the writers and all the industry-related people who have lost their jobs or are in danger of losing it. The issues are complex and could probably be settled with a bit of goodwill on both parts. In passing, I want to thank my new pal Clifford (hi Cliff!) who directed me to online discussions way too abstruse for me to sum up here, but one of the thing said in the discussions cleared up the phrasing of something I wanted to write about for a very long time. I'll probably post it sometimes next year and when Cliff sees it he won't have any clue what I'm talking about, since it has nothing to do with the writers struggle. But thanks for being so brilliantly articulate, Cliff! I owe you one.

Have a happy Hanukkah, a merry Christmas, drive safely (careful with that eggnog!), be kind and nice to the people you love, and lobby your various governments to replenish the food banks.
See you in LA in 2008!
Posted by Frenchy but Chic! at 7:38 PM

Have fun in the "New France"!