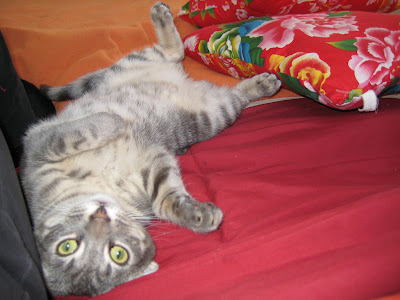 I hope you are all doing well, and missing FBC! a lot. I wanted to post a few things recently but where I am posting from it is impossible to upload the pictures I've taken en France, and the connection is very slow.
I'm in Normandy in my boring hometown where there is no art, and the only wi-fi connection is at the local McDonald's. For the life of me, I cannot go there to blog, sorry. If they had drinkable coffee and edible goodies as well as real heating, maybe, but I don't fly thousands of miles to end up at "MacDo", as we say.

Anyway, I thought I could whet your apetite and let you know what I'd be posting about in a couple of weeks. I'll write a post about life in frozen Sarkozyland, where our beloved president follows the steps of past personnality cult devotees (Stalin, Hitler, Mao, Kim Il Sung, Britney Spears) by appearing daily in the complicit medias, most of them owned by his closest friends.
Most recently was with a washout former-model-turned-boring-chanteuse, Carla Bruni (disastrous facelift, BTW).
I'll give you a few details about how it is perceived in my boring hometown; to which I will add some pictures of green elves and attorneys on strike in full regalia (yeah, they have to dress up here! It's fun!).

I'll also post a few pictures-only items, such as the gargoyles with hard-ons at a local ruined Gothic church, as we haven't had an extreme-porn post in a while. Gargoyles are rather powerfully adorned,as you will see.

And for my foodies devotees, there will be a few posts with pictures of cheese stores, open-air markets (real fish! with their heads on!). I'm going to a Norman restaurant tomorrow, so hopefully I'll be able to take pictures of andouilles de Vire, Livarot, Calvados and apples dishes. There's also a slight chance I may have dinner at L'Atelier de Joël Robuchon in Paris next week, so if I do I'll try to take pictures and report.


Lastly, living in a small town is as boring now as it was when I was a teenager, the only difference being that now there are a few bars open after 7 PM. So, there's not much to do in the evenings and French TV being so abysmally terrible, I've taken to listening to independent oldies from my youth.
But I do wish TV was better as the only watchable things are re-runs of such antiques shows as Bewitched, Happy Days, Friends and so forth. So I hope our WGA-friends on strike are going to get their labor dispute settled to their advantage, not only because my lefty Frenchy self wants the striking workers and the collateral casualties of the strike to be able to make a living again, but because THE WORLD NEEDS GOOD TV again.
Since US TV shows are endlessly re-runs on Euro stations I'm sure there is still some profit for the studios/networks to make, so if you have a bit of time left before X-Mas, write Santa a nice letter asking him to stop the stalemate.

Meanwhile, Happy Holidays to everybody!

PS: the picture above bears no connection with the subject of this post, I know, but I miss my cat
Posted by Frenchy but Chic! at 12:01 PM