Where Incompetence Has Lead Us 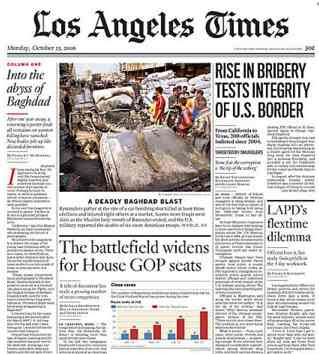 We've read a lot about MOCA over the last few weeks. Now something my art readers here in Los Angeles may not have noticed is how incredibly bad out local paper has become, thanks to the incompetence of a zillionnaire Chicagoan who cultivates an unfortunate resemblance with a giant garden gnome, Sam Zell. Remember when Ron Burkle with Eli Broad (who wanted to run the paper as a non-profit foundation) and David Geffen were competing to buy the Los Angeles Times? They didn't succeed, and instead Uncle Scrooge grabbed our newspaper. Now, about a year later, a good hundred layoffs later, our paper gutted out of its substance, Uncle Scrooge is filling for bankruptcy.
If LA art lovers cannot imagine a town without MOCA, try to imagine it without the LA Times. I have no idea what's gonna happen to it, and if as usual everybody is going to ask Eli Broad to the rescue. If it happens, he will inherit a newspaper whose very blood has been drained, where good journalists have been replaced by bloggers, and where we have to endure the unbearable stupidity and condescension of columnist Jonah Goldberg and Joel Stein.
I remember when the LAT was a good paper, much more progressive than the NYT. It was weak on covering culture and the arts, but was really good on the environment, and was kindly inclined toward the poor. Now we're left with a lightweight paper, an impossible to search website and a gazillions poorly written blogs about real estate porn and doggie bling, thanks to Sam Zell and his incredible foresight. Now, Mr. Zell, please stop being stupid and resell our beautiful LAT to Broad or Geffen or whatever billionaire who lives here wants to buy it, and go manage your Cubs, OK? You'll do us a favor.

I found the picture here.
Posted by Frenchy but Chic! at 1:15 PM