Captain Obvious And The MOCA Saga 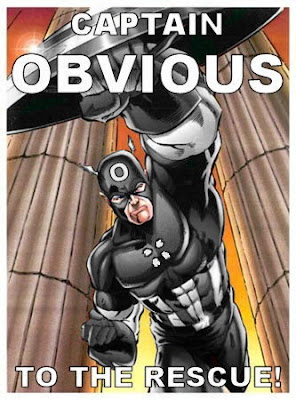 
It's Thursday, and there's another MOCA Board meeting today, which Eli Broad will attend. As I've said all along - I'm putting this sentence here because you're apparently not a blogger if you don't hammer the fact that you wrote the exact same thing a week ago, and you're fabulously right. Bloggers have to be priggish and condescending, in case we'd be mistaken for real journalists who have to dabble in more facts than opinions - anyway, as I've said before, methinks Broad is the best option, and so does Broad apparently, if we believe what Christopher Knight writes today in the LAT "Culture Monster" blog. I'd suggest you guys read it rather than the opinions of agitated bloggers, including my own sweet self, because Knight is better informed, and he's paid to follow the story, which my Frenchy self isn't.

There's been an uproar against the proposed LACMA merger, with bloggers left and right thinking LACMA only interest is in grabbing MOCA's collection and leading the museum on a leash. As an aside, there's been a very funny exchange between Brady Westwater and Rosette Delug (MOCA Trustee) on their respective "walls" on Facebook. I doubt both read FBC!, but, hem, if someone knows Delug, please let her know it's possible to adjust her privacy settings on FB. (Just sayin'). Still on Facebook the MOCA Mobilization group has been rather quiet, maybe because their initial goal of getting 10,000 signatures on their petition, downgraded to 5,000, hasn't been met.

What no ones seems to have considered about the LACMA official proposal, because my esteemed blogger-colleagues apparently don't really know how museums are run from the inside, is that this famous proposal may have been designed by LACMA precisely to look like an unacceptable solution to push the MOCA Board to accept Eli Broad's proposal instead. Because, you see, it isn't in LACMA's best interest to merge with MOCA and suddenly find itself morphing from an encyclopedic museum to a bloated contemporary art operator with 3 geographically distinct facilities, and now dwarfed collections of classical or non-Western art left behind to be, what? Rejuvenated by contemporary artists? After a while it starts to be stale, you know. In addition, LACMA cannot afford the expenses of adding staff (in case you wondered: only a tiny fraction of LACMA's staff is paid by the County), maintaining more facilities when their own trustees cannot find the will to upgrade conservation and storage, etc.
In short t is no more desirable for LACMA to merge with MOCA than it is for MOCA to be chained to LACMA. But LACMA had been approached, they had to make a formal move toward the MOCA Board, and they came up with whatever would be possible conceptually for LACMA in case they had no other choice as well but merge to keep MOCA's collection in Los Angeles.

And for Tyler Green who was up in arms about the fact that the proposal seemed like a swipe at Jeremy Strick during embattled times: a) having two directors leading one merged institution seems impracticable if not ludicrous and b) I cannot imagine a Board accepting a merger while keeping a leadership that has proven ineffective, and c) Christopher Knight yesterday called for Jeremy's resignation as well, and I'm sure Knight likes Jeremy as well as the next person.
Knight finally said what everybody in Los Angeles knows: Jeremy is the nicest guy ever, and everybody likes him, but he grandiosely failed at leading the museum in a responsible fiscal manner. While drawing a salary that's a little bit inflated in comparison to MOCA's deficit. I personally think Jeremy should stay on until the museum is out of the woods, that is, if it accepts Broad's proposal, if only because there's no one else to act at the time being.

And finally, I'm going to play the blogger/journalist game of "this is what you people should do, look how I'm right at virtually managing museums from my laptop": Not only the MOCA Board should be well inspired to accept Broad's proposal and to ask for Jeremy's resignation, as well as renew itself with more competent members, but when it finally finds the magic person who's going to direct this museum, it should hire a real manager as well. No, not the mythical "art person who's a beloved fundraiser who can also run the day-to-day operations while being fiscally conservative". What MOCA, like every museum needs, is one Director who's in charge of the program, etc AND a second person who's doing all the boring legwork and accepts the unrewarding position of being an able administrator. Look at LACMA: without Melody Kanschat, Michael Govan would have much more trouble running the museum as it is. And when MOCA has found this magic team, the next director should be very well inspired to rethink what MOCA's position is in a city where the museum landscape is already littered with contemporary art institutions, how to stand out locally as well as internationally.

Anyway, this is my last post about it, I'm really sick of the saga. And no "Your Social Life" today as well. I'm sure you can manage without me.

Picture of Captain Obvious found here.
Posted by Frenchy but Chic! at 9:43 AM