MOCA Is In Trouble And So Are We 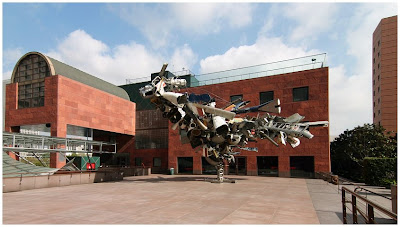 I was not going to post anything today, as I'm still very sad and clearly, I don't care that much about what's going on in the world right now. But I've been reading the news, to try to think about something else, and bam! of course stuff happens in the art world every day.
Like all of you, I had a look at the NYT this morning and frankly, whether Eli Broad wants to litter the Los Angeles cityscape with yet another museum bearing his name is the least of my preoccupations today. Seriously, why the NYT bothers that much about Eli Broad, I wonder? Does the LAT routinely covers the coming and goings of the art-inclined billionaires back East? OK, they don't have any journalists anymore left at the LAT now, so I guess they have to resort to putting up useless blogs about doggie bling and whatnots on their website, but still, I've yet to see a series of articles stalking every art decision made by, say, Steve Cohen. Or, let's be bold, Francois Pinault in Europe.

Instead, the LAT finally, now, today, writes about the open secret everybody has known about in this town for the last several years: MOCA, like Detroit's Big Three, is now running out of cash. It's been operating in the negative for a while, and everybody knows that the museum has had a fundraising problem for a long, long time. There was a bit of a boring article this morning, and now Christopher Knight, our local Crusader For The Arts comes with a column admonishing MOCA's Trustees to get their checkbooks out. Which is nice, and I'm sure everybody is connecting the dots about Broad wanting to create yet another modern/contemporary art space in Los Angeles, as if the cultural landscape needed it. You know: MOCA, LACMA, the Hammer, SMMOA, oh cool, let's create another museum, we don't have enough to see around here.

Now like all art people in LA I'd be devastated if MOCA had to close its doors and go bankrupt. Unlike GM, MOCA cannot go to Congress to ask for a bailout, so it has to find different solutions. I understand the call for more money right now, urgently, and if I were to win the Mega-Millions tomorrow I'd gladly give some. I agree with Knight, the Trustees do have to step up to the plate and save the museum, ands its collections. It would be a shame for the collection to be sold off and dispersed, or merged with another institution that's already out of space. Clearly Los Angeles needs MOCA to stay on, if only to promote itself as a cultural haven for the tourist industry (it's killing me, how the city fails to promote the art and architecture here).

But if I were a Trustee I'd ask for a bit of fiscal responsibility as well. Does MOCA need an outpost at the Pacific Design Center? Can MOCA shave off some of its expenses? Now, having worked in countless big institutions myself, some of which had to go through budget freezes, hiring freezes, salary freezes and salary cuts, I understand how horrible it is for the personnel in place, and how it breeds poor employee morale.
But for the sake of the institution and the sake of the art it is duty-bound to preserve, these are necessary fiscal steps to take. Postponing some big shows, reducing some of the staff, extending the run of some exhibitions, freezing acquisitions, trimming off publications expenses and marketing executives salaries sounds like things that should be done.
Then as a putative Trustee I'd take a hard look at my board, and at my Director, and I would ask the Chairman and the Board to maybe, maybe go look and expand the board with more moneyed and more willing members. I'd ask for recruiting a kick-ass development team with outstanding fundraising abilities and a verifiable track record in the visual arts. Maybe I'd want to second the current director, who everyone likes as the true art person he is, with a charismatic President -cum-money person.

And if, through collective checkbook-opening, belt-tightening operations I'd manage to see MOCA collectively saved, I would try to give it back its shine and prestige by trying to redefine its position in a city that now hosts so many contemporary art spaces. No doubt half of the galleries in LA will close in the next couple of years, and that the art that will emerge from the area's art schoola will be a whole lots smarter, more interesting, more challenging than whatever the market has favored as "Los Angeles Art" for the last 5 or 6 years.
If LACMA is for families, the Hammer for cutting-edge artists, and SMMOA for the most innovative alternative shows (seriously, I love what they do, it's the smartest exhibition program around with OCMA) then maybe MOCA should stayon as the Blue Chip haven its collection determines it to be.
Blue Chip doesn't mean they have to go all Ab-Ex and Pop Art on us, as there's lots of wiggle room for conceptual art, European artists and whatever irreverent contemporary art as long as it's semi-historical. By which I mean, you know how American museums need the Europeans to validate, say, Smithson, Matta-Clark or Thek 15 years before curators dare show them here? Well, screw the 15 years validation period, and bring the European-made retrospectives here as well. MOCA could even pioneer the European model of co-curating between institutions, instead of circulating "take" shows that are ready-made elsewhere. Heck, they could even pay independent curators to organize shows. How do you think European institutions save on staff expenses? Of course it breeds a shitload of dubiously qualified freelance curators on the market, but on the other hand it brings on more diversity in the exhibition programs.

Lastly, I think it would behoove the region at large to have some kind of conference between the County, cities and cultural institutions, about the kind of cultural landscape it needs and can support. If you go to Paris, you have a gazillion institutions that opened over the last 30 years, all competing with each others because at some point, the need has been felt to open a new space to counteract the perceived conservatism of the reigning champion: the Musee D'Art Moderne de la Ville de Paris saw the Pompidou Center which saw the Jeu de Paume which saw the Palais de Tokyo which saw Le Plateau open (and for the private side, the Cartier Foundation and La Maison Rouge).
Why the creation of so many art spaces? Because there's not enough turnover in institutions where curators and the rest of the personnel routinely stay in place for 15, 20 years.
You cannot eternally divert or contain resentment of the younger, more alternative, different art lovers who don't find a space in the institution which, to maintain itself and its financial base, has to morph into blue chip flagship sooner or later. Museums, whatever their sources of funding, have to attract enough of a broad audience to legitimate their existence (or they're dubbed elitist) while remaining trendy enough, intellectual enough, scholarly enough, or they risk becoming yet another annex of the Universal City Walk.
So the solution in Paris as in Los Angeles, has been to open new spaces as time went by and arts crowds became more demanding, instead of reforming the institutions from the inside.
The result is a bevy of spaces competing with each other for the same financial pie. It's cool for museum goers to have a large choice of options on the weekend, but maybe it would befit everybody to have a clearer definition of what museum does what, and hire the curators the more apt to accordingly develop the specificities needed at any given museum. A good museum director should be able to pick up curators who not only have the right qualifications and pedigree, but also the ones whose taste doesn't necessarily match the rest of the curatorial team's.
Taste, oopsie, I dropped the T-Bomb. You know, that thing you're not supposed to talk about at acquisition meetings. It's as dirty in the museum world as Janet Jackson's nipples on TV, and as prominently displayed under some transparent disguises (history, scholarship, bras).

It's very simple, really, this taste problem, and by saying so I'm reflecting conversations I had with non-contemporary art visitors, and people who are not your run-of-the-mill-artsy-fartsy-mindfucks. It's a bit boring when you travel and you see the same art everywhere in every museum you visit. Does every museum has to be like Marfa? Does every single space has to look like the Broad? Should every Modern collection reflect MoMA's pioneering spirit?
You know, its like when you go to Germany and every museum has a big Beuys installation, a series of large Warhols from the 1960s, some Gerhard Mertz, a Bruce Nauman here, a few Richter there, let's add a Paik somewhere and a bit of the Becher elsewhere. Granted, these can all be awesome, but after 5 museums you long for a tiny little unknown drawing, something you've never seen anywhere.
Now if museums were to recruit curators with a lot different tastes and a bit more curiosity, and let them experiment a little, maybe they would attract and develop a larger audience and a better fan base. It would justify all the public and private money that's sunk into them for the future generations to know what art looked like in the early 21st century, in all its diversity. It's all very well to blame modernism on Clement Greenberg, but it's a bit silly. It wouldn't have hurt MoMA's curators to travel a bit and look elsewhere.

Likewise, curators could start to think in terms of what they can bring to the city, to the institutions, and to the artists, rather than think in terms of what's best for their career. They could be a whole lot more intelligent in terms of not appropriating ideas from their colleagues and underlings if they knew they could develop their own without risking to spend the next 5 years uniquely relegated at menial tasks (deaccession anyone?). Hell, they could even give proper credit to people who work with them! In any case, if curators were more aware of their own taste and not trying to hide it behind critical theory and whatever scholarly material they've been stuffed with at colleges, they could be less insecure in letting others develop different ideas and show work that they don't like themselves, but that attracts a new audience capable of supporting the museums in times of crisis.


Will we see the artists, art students, writers, collectors, art dealers and curators of Los Angeles rally to support MoCA? I'm not sure about it, but if they do, and if the museum is saved from bankruptcy, I hope they will ask for a serious rethinking of the contemporary art landscape in the region.

Picture lifted from this site.
Posted by Frenchy but Chic! at 4:56 PM

Great article FBC !
Best article I read all week on this topic.

I was mentioning to Edgar last week that Moca wants a bail out, and now Broad wants to give 30 million to them.
I am not sure we can call it B-MOCA but it may happen

I saw your article up here in Portland linked from PORT