Oranges And Sardines At The Hammer 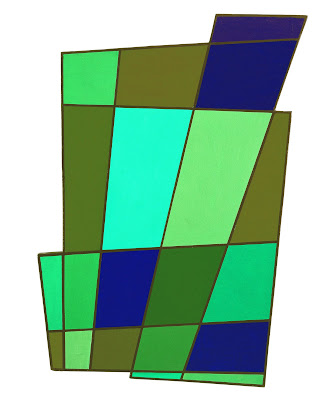 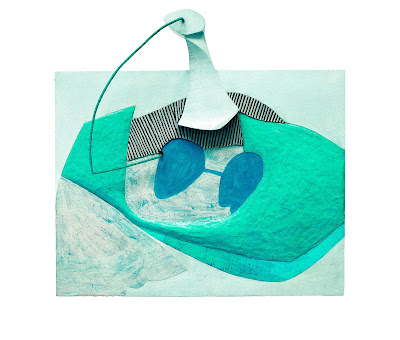 Last Saturday FBC! went out with fellow reclusive pal Kurt (hi Kurt!) to the opening of Oranges and Sardines, the last (?) show curated at the Hammer by Gary Garrels, who has left us to go up North in San Francisco. Our loss is their gain.
Luckily Kurt was as animated as I was by the desire to see the show, and really not into schmoozing, so we arrived unfashionably early and left in the same fashion (sorry for anybody who wanted to socialize with us, we were probbaly gone by the time you arrived)
Thus proceeding we got to enjoy looking at the artworks, rather than taking in the scene. And pray tell me, when was the last time you did see a show with beautiful artworks, rather than mindlessly socialize with fellow art people?
The principle of the show was very simple, and like all simple idea was pure genius: ask 6 living artists, all abstract painters, some of them veterans who has seen it all, the others hip and trendy youngish ones, to pick up one or two of their own work, to confront with a selection of other artists who influenced or informed their own work. It’s a little bit like the exhibition that curates itself, except of course Garrels did make a selection of the initial roster, and had to do all the legwork: finding the pieces, getting the loans, installing the work and make everybody happy.

You could argue with his initial selection (as a curator myself, I probably would had chosen an entirely different group of people, but I’m not going to split hairs, OK?) and ask questions about the wisdom of putting together some classic modernist masters alongside some yet-unproven contemporary painters.
Would Mark Grotjahn’s hold a wall next to Mondrian? Next to Ad Reinhardt? FBC! won’t give an answer to that . Instead, FBC! reveled at looking at a bunch of great work you don’t get to see together that often.
The overall feeling after leaving the exhibition was of having witnessed a very blue chip moment, and a testimony to Garrels’ clout as a curator. He had barely stayed 2 years at the Hammer and he’s been able to obtain fabulous loans that would cost another curator 5 or 6 years to negotiate, from the beautiful little Mondrian to FBC!’s absolute favorite in the planet, the Felix Gonzalez-Torres Untitled, (Go-Go Dancing Platform), chosen by Wade Guyton.

After almost 15 years in the artworld, FBC! must confess that sometimes, she doesn’t give a hoot about exhibition concepts, highfalutin takes on deconstructed subjects and political stances about the harsh world we’re living in. Instead I enjoy using my eyes to watch, look at, gaze, gorge on artworks so beautiful and so moving it makes the viewer fall on one’s knees and cry. And artworks like these are aplenty in Oranges and Sardines. Incidentally the title, (taken not from, as you would have it, say a Picasso from the synthetic Cubist period, but from a Frank O‘Hara poem) speaks volume about Garrels’ intent as a curator. Why I’m Not A Painter (the title of the O’Hara poem) could be taken literally as a statement of a curator’s profession: we’re here because we do not create, to help artists present their vision to the world, because we revel in the fragile moment of beauty we encounter through their work.

Anyway, it seems to me Garrels has wanted to offer everybody a good chunk of warm aesthetic pleasure, as well as making people think about the path artworks take to be created. There’s the art history we’re taught in books and at school, and there’s art history in the making, when what influenced an artist is not what the expected wisdom of Academia would like us to accept lock, stock and barrel (take that, Academia!).
Some artists in the show have made impeccable choices, the ones you would expect looking at their work, knowing where they’re coming from and the era when they started working. Christopher Wool’s for example are so conventional in that regard that the result of his selection is quite boring, except that the Dieter Roth pieces he selected strangely look like early Sigmar Polke. There’s a late Picasso that looks totally obvious compared to the Wool artwork, down to the gray palette, and a virtuoso Albert Oehlen that looks like all the Albert Oehlen on the planet. Oehlen is a great painter, and had he been fortunate to live in an imaginary time where no Martin Kippenberger had ever existed, he may have stood a better chance to be genius inventor, instead of being co-opted by the Blue Chipdom of auction houses. I find his work gorgeous, but not epoch-altering, if you catch my drift.
The rest of Wool’s selection is on the same level, good solid work but nothing that makes you weak at the knees.
Charline von Heyl’s room is the other one that is totally expected, and a bit of a failure in the sense that even though the work she does and the ones she selected differ from the rest of the exhibition by the organic “formless” bent they display, they look very weak compared to the rest of the show. I adore Paul Thek as much as the next person, but the one there is rather forgettable, ditto the Franz West and the Immendorff. But I’m glad she selected Carla Accardi.
As much as I didn’t care much for those two rooms, I’m nonetheless happy they existed if only because it shows, at least in my mind it does, that Garrels was respectful of the artists choices and didn’t try to impose his own vision on them. And on a personal level, I’m all for a bit of weak choices and failed artworks in exhibitions, if only to show to the public at large that artists all have their bad days, sometimes make bad artworks (even Leonardo had his fair share of ruined works, you know), and are no superheroes. I also like the fact that sometimes out of bad, failed artworks, another artist is going to find the one thing that will push him or her to create something entirely different that will turn gorgeous. It’s also the way art history is being made, by artists rehabilitating forgotten peers in their own work and making the dogmatic theoreticians re-think their convictions.


This could have been the perfect conclusion for the review, but being a contrarian Frenchy I cannot end this without mentioning what made me enjoy the show so much. The very first room of perfectly chosen works, the one selected by Grotjahn, was a perfect lesson in expected choices, down to the Cadere probably chosen as the one odd sculpture, but which, with the conceptual lineage and mathematical permutation of colors it display, makes perfect sense with the rigorous construction of Grotjahn’s painting, and obviously with the Mondrian as well. There’s everything from Sherrie Levine to John McLaughlin, the weakest works being the Paul Klee and the Clyfford Still, and as far as weak works go those were pretty good. I would kill, metaphorically speaking, for the Ad Reihnardt.
The exhibition would have been a success already with only those works, but this happy viewer was lead to the Wade Guyton-curated pieces right after, the one with the poignant and aforementioned Gonzalez-Torres. I do not know whether the go-go dancer is scheduled to show up, I sincerely do hope so.
I loved Guyton’s choices because they were not the most obvious, at least for me. I would have expected, say, Cady Noland (she’s not there), but not the giant Robert Morris vagina felt sculpture (House of the Vetti II, 1983), nor France’s very own Martin Barré (with Cadere, it’s 2 French artists in the same exhibition) whom I hope curators in this country are going to look at more closely.

With Amy Sillman you then would get to see a much, much better Guston than the one selected by Christopher Wool, a very touching Eva Hesse and a really gorgeous Chamberlain. There were some other interesting picks, such as Juan Mele, a minor artist but whose work makes sense when viewed as the same time as Sillman, and a Howard Hogkins so atrocious it actually becomes good (you have to see it in person to understand what I mean) and that made me wonder what Richard Jackson would think about it.

The very last selection was the one made by my favorite abstract painter, Mary Heilmann, the most eclectic choices of the exhibition. It included Joseph Beuys Felt Suit as well as an early Bruce Nauman (with whom Heilmann shared the same apparent, deceptive simplicity), a David Hockney (makes sense for his use of color) and a very good Francis Bacon, an artist you’d better see in single appearances rather than endure a whole retrospective of. I’m still pondering the Heilmann choices, which are emblematic of the exhibition at large.
Playful, engaging, sometimes puzzling, at other times totally obvious, opening paths of reflections about how art history (or art tout court) is made, exciting and curiosity-rousing, all very good reasons for you to go see the exhibition at the Hammer. You have until February 8, 2009 to do so.
Posted by Frenchy but Chic! at 12:26 PM