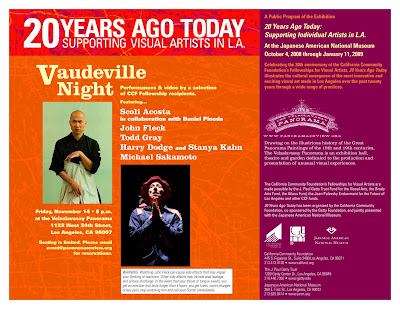 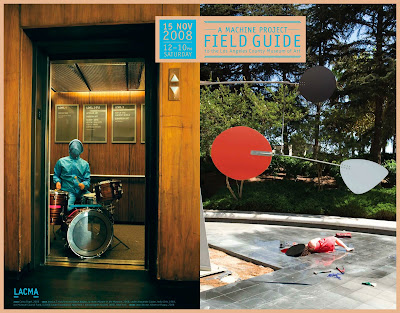 My dear, beloved readership, you have noticed how often I mention my migraines on FBC!
It's because for the past 7 weeks, I've been having migraines one day out of two. You add some post car-accident back pain to the mix, and you can understand why my posts have this grouchy, cranky tone (unless you've never been in constant pain, in which case I don't hold it against you, but I admonish you to be nicer to people around you who suffer physical ailments). Yesterday was one of those days, so after I was done with reviewing Oranges and Sardines, I couldn't look at the laptop screen anymore, nor read or watch anything, hence the lateness of today's YSL.

Anyway, there are basically two art-related things you gonna do this weekend, and the first one is starting tonight: at the Velaslavasay Panorama, you're going to a vaudeville night where artist extraordinaire Scoli Acosta is performing, along with John Fleck, Todd Gray, Harry Dodge and Stanya Kahn, and Michael Sakamoto. The program is an offshot of the CCF, and everything is written on the jpeg above. If you like the Museum of Jurassic Technology, you're going to adore the Velaslavasay Panorama, which, in addition to being a mouthful (try saying it very fast: velaslavasay, velaslavasay, velaslavasay! FBC! isn't liable for the mispronunciation, misspelling or other trouble incurred while trying to figure out what a velaslavasay is) is a very cool place to visit, in a beautiful old theater. It's in West Adams, not too far from where I live actually, in a neighborhood that makes your realize how beautiful Los Angeles is.

Even closer to my place, basically 12 minutes form FBC! central, Machine Project is going to take over LACMA tomorrow with "A Field Guide To LACMA", 10 hours of performances and animation non-stop in the venerable institution that's starting to be shaken, not stirred, under the guidance of Michael Govan. There's something called Lasagna Cat, which Pomme is protesting mightily since, as everyone knows, it's sardines cats are into, not lasagna, Garfield notwithstanding (I've put that sentence here uniquely because I like that word, "notwithstanding". Now you know). While you're at LACMA, go have a look at the exhibitions,
You can also read an interview of tomorrow's event organizers here (and plenty of other interesting entries).

If you don't fancy a LACMA takover, you can attend Maeghan Reid's Solo Debut at Chung King Project, or just dash there after a few hours of performances at LACMA. There's also a Sarah Thornton book signing at MOCA at the Pacific Design Center at 3 PM AND a conversation between MoCA curator Bennett Simpson and FOCA Fellowship recipients Martin Kersels, Dorit Cypis and Julio Cesar Morales at exactly the same time but at Grand Avenue (you guys ever heard of a scheduling conflict? Man, I hate to have to disclose it to you. How inconvenient)

Anyway, have fun at all events, and be kind to your neighbor.
Posted by Frenchy but Chic! at 9:38 AM