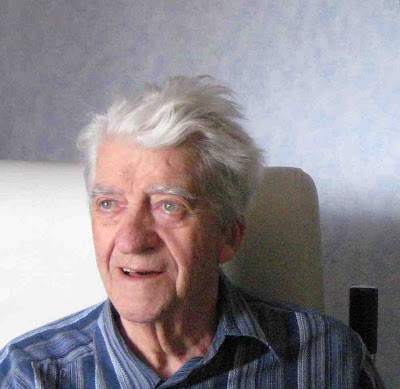 My beloved grandfather who, along with my grandmother, raised me, as departed this planet this morning. I miss him horribly.
He was radiating kindness to the point that pets were congregating around him wherever he would go visit. My Grandpa was the nicest person ever, someone who not only wasn't bigoted or racist, but who couldn't comprehend why and how other people could be so mean and nasty. I've never seen my Grandpa do anything stupid, ever, nor be angry or aggressive toward anybody or anything. He loved children and spent hours building tree houses and doll houses for us, insisting the Playmobil mansion he built for us out of an old cheese-ripening box would have electricity, for the little creatures to be able to switch on the light if they wanted. He was very poor but set aside a small portion of his paycheck every month to buy us a little bit of candy he would meticulously prepare in tiny, individual packets with our name on it. He was the most affectionate man, and was always beaming each time we would come visit, even if in later years he more often than not failed to recognize who exactly we were. It's true the Frenchybutchic family is very, very large, and he had many grandchildren and great-grandchildren, so it's not surprising he had trouble with our names, but he knew we were people he loved. He was very sweet to the nursing staff at the hospital, complimenting the women on their nice figures. The very last words he told me, back in June, were "we are so happy when we're all together".

Because he had lost his father early, he had to leave school at the age of 13 to train and be a mechanic, instead of setting up to be the potter he always wanted to be.
He worked in construction for 47 years, climbing in and out of vertiginous cranes in foul weather, driving and repairing bulldozers and other construction engines. If he had been able to attend high school and college he probably would have become an engineer. Instead he worked as much overtime as he could in the worst conditions ever to make sure he could feed his family, and never complained, ever. About anything.
He build and refurbished a lot of the furniture, build a fireplace in the tiny house he was finally able to acquire in his late forties, he laid down bathroom tiles, painted walls and installed wallpaper. He could fix appliances, big or small, and the plumbing. I've always felt like a complete dork because of my lack of manual skills, compared to everything he knew how to do. He taught me arc welding when I was 14, something I mightily enjoyed if only because we would cut the power in the entire neighborhood each time we set to do this (yes, Madame Gain, Madame Maeck, it was us. Sorry!), but aside from that I'm unable to drive a nail on a wall.
My grandpa was also the only person in my family who always encouraged me to do what I'm doing (that is, to be a parasitic artsy-fartsy instead of doing anything useful to society). He had suffered too much from not being able to be the creative person he was. After retirement he finally enjoyed to do the things he liked, and started to make some wood carvings.
We went to visit a museum together twice: once when I was a child to see a show of Japanese woodblock print at the local museum. He felt the occasion was solemn enough for him to wear a suit and a tie, and a hat. I also took him to the Brancusi retrospective at the Pompidou (in 1995 or 1996?), at which we had great fun. It was beautiful to see his sculptor and builder take on the work, instead of the boring respectful attitude most museum visitors felts obliged to adopt.
My Grandpa was also a devoted gardener who delighted in giving us children all the fraises des bois from the garden, and who religiously maintained the sorrel patch that fed us on so many evenings. If I feel like it I'll give you a recipe in his memory.
He loved flowers, jigsaw puzzles, crosswords, playing Scrabble, and despite leaving school so early had an impeccable sense of grammar and spelling. He read the local newspaper everyday from front to back. He also had a slight eccentric streak which tended to manifest itself in a very lousy but always sweet sense of humor, feigning to appear surprised, when stuck in traffic, at everybody else going to the same spot as he was. On other occasions when he would miss a turn and get lost, he never panicked and always pretended to be happy to serendipitously get an opportunity to "admire the landscape".
At some point after he got to retire, he decided to dig a basement-cum-wine-cellar-um-mushroom-bed under the garage floor, which he did. It was great fun to hear him pretend he would dig as far as the William the Conqueror castle's moat a few miles away. He laid bottles of our homemade hard cider in it, a bit of wine, and I'm not sure if he hasn't grown fungi in it, after all. He was the king of the hilariously bad pun, and the most affectionate man. In his entire life, my grandfather hasn't hurt a fly, and I don't think there are that many people about whom the same can be said. I love him. and I feel like dirt I cannot go to his funeral.
So FBC! readers, sorry if I'm not around much, and for my friends: please do not call me or show up at my door unannounced. Thank you.
Posted by Frenchy but Chic! at 10:52 AM