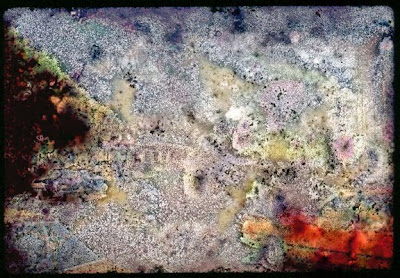 So as I said yesterday the MOCA drama is taking front page and continuing. Christopher Knight In Shining Armour is reporting on it, and Tyler Green over at MAN is imagining all sorts of solutions. It's interesting to think about a concerted Getty-LACMA-Broad bailout, but I'm not sure that:
a) it's legally possible for the Getty to fork over some money for that purpose (it may well be, but I don't know anything about it),
b) LACMA sure doesn't have the money for acquiring the collection at its current value, and if it did it would be at such a discount you'd want to weep over the waste that happened
and
c) Eli Broad? really? it would be a great opportunity for him to actually act as the philanthropist he thinks he is, but hhhhmmm, somehow I don't see it happening, at least not in a way that would satisfy all parties involved.

The idea of MOCA ceding its collection for cash to bail itself out and become an exhibition-only space is lugubrious. If only because, when you want to stage large-scale exhibitions of international renown, you need your collection as currency to obtain loans. I'm sure if LACMA was to get into a shared-collection scheme with MOCA to bail them out, they would oblige in lending out (as collateral, so to speak), but what if it conflicts with their own loan exchanges? Unpractical at best.

In any case, if I were you I'd run over to MOCA this weekend to go see the Kippenberger retrospective, or the Louise Bourgeois one if you're inclined that way (being French, I've seen at least 3 Bourgeois retrospective sin my lifetime, so I'll give it a pass). I sure hope the museum's Dan Graham retrospective (initially scheduled to open at the Geffen, now at Grand Avenue) will still be held in February.
Whatever the fate that awaits MOCA, when everything will be said and done, someone should look at why and how the practice at dipping in the endowment while expanding staff and exploding budget had been allowed, and by whom. It's nice to blame the trustees, but the blame should be shouldered by the museum's administration as well.


Aside from giving MOCA a cautionary glance this weekend, there are lots of other options. First of all tomorrow evening is Groupshow Without Andre Butzer, an artist-curated exhibition filled with FBC! pals. 1711 N Spring Street, Los Angeles, CA 90012 (enter at back on Baker Street). It starts at 8 PM and is a 2-day affair which I'll be unable to attend as I've got other obligations.
At exactly the same time tomorrow, if you're in Eagle Rock you can go attend LA Lit: Clouds at the beautiful Eagle Rock Center for The Arts. It's a two-day conference on everything literary and experimental in Los Angeles, and includes some performances by the likes of Teresa Carmody.
Saturday evening at Otis is the closing reception for When It's A Photograph, from 6 to 8 PM, with the likes of Marnie Weber (hi Marnie!), Paul Sietsema, James Welling, Doug Aitken, etc.
And Sunday evening, what are you guys doing? Phone banking for MOCA? Yup, that would be nice, but I have a feeling instead you're going to attend the opening of Sundays Gallery, with Michael Rashkow, Eli Langer and Rowan Wood.
Life goes on on Tuesday when, if in Van Nuys, you can attend Doug Harvey's Mouldy Slide Show from 8 to 9PM at Los Angeles Valley College. Click on the link for the exact info.
If you happen to be in London next week instead of celebrating Thanksgiving, I conjure you to go attend the opening of Sphinxx curated by FBC! special pal Alexis Vaillant, at Stuart Shave's Modern Art gallery.

FBC! will attend none of these. Not only because I'm still grieving, but also because I've signed up for this and I'm pretty sure I won't be in any sort of shape to attend and socialize at any art thing this weekend.
Lastly, there won't be any YSL next week, and I'm not sure I'll post anything anyway, but I'll be back for certain on the first week of December.

Pics: Doug Harvey's Mouldy Slide stolen from his blog.
Posted by Frenchy but Chic! at 2:38 PM