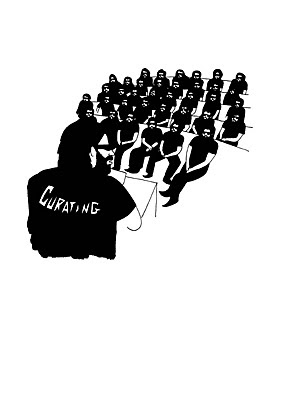 It’s that time of the month again -no, not the one when your boyfriend makes stupid sexist remarks about this being that time of the month again- the time of the month when my devoted readership gets to discover the Thanksgiving In [Insert Month Here]™. It’s October and I figure I should post it on Halloween day, just to confuse everyone.
Anyway, after La Maison du Pain, my Distinguished Literary Correspondent and Mariah C. I’ve decided to devote this month’s installment to my very old friend, Alexis V. Alexis is French, and like all French people named Alexis, he is male, so if you wonder why I refer to him as« he » all the time, for once it is not the result of a flagrant oversight of copy-editing (but don’t worry, all the other typos are, as usual).

Alexis and I met years ago while attending school, in a venerable institution that at the time offered the only contemporary art history classes in France, and was also home to a Museum Studies graduate program which we duly attended together, after finishing the undergraduate thingy.
Now my memories of these early years are very murky, and I don’t recall much of it. I think at the time Alexis and I didn’t really hang out together, and when we met it was probably with loads of other people. I was also attending another school in addition to our common one, and I think so did Alexis, which meant both of us skipped lots of classes and were in the same classroom only for the huge amphitheater lectures.
So I didn’t really know Alexis, except I was vaguely aware both of us chose the same artist for our respective Master theses, and we were fairly critical of our program when we occasionally met at parties. In Museum Studies, you see, there’s no talk about the art itself but only about the way you handle it, and it was geared more towards archeological artifacts than contemporary art.
We were both well aware of Robert Smithson’s appropriation of Nabokov’s quote: “the future is the obsolete in reverse”, but considering contemporary art as future archeology was a meager consolation during our excruciatingly boring classes: “a great museum, it’s a cafeteria, a few restrooms, plenty of audioguides, not too much sitting or the crowds become too dense. It’s better to show only reproductions so the art doesn’t degrade, and keep the original in climate-controlled storage”.

Class outings were spent looking at wall labels, lighting implements, particle accelerators, how to make sure the blind people/vision-impaired were not forgotten when putting together visual displays (I kid you not) and other essential topics.
I remember going to a field trip to some archeological digs where we were ushered to a classroom and lectured on how the acidity of the soiled made for bad preservation of the swords buried under the hill of a famous Gallic defeat. But it was great for porcini ‘shrooms growth, and there were some fairly impressive toadstools there too, something I discovered when I decided to skip class to wander in the forest.
Anyway, most of the classes failed to make an impression on me, and since I had some hands-on experience in museums before, everything at school felt rather redundant, so I skipped too many classes to really get to know Alexis. Missed opportunities…

Then Alexis and I got similar and parallel professional experiences. We both went abroad to work, curated our first shows, published essays, and came back to France at the end of the 1990s. At some party I went to, someone mentioned Alexis and how he wanted to meet again. Alas, being plagued with a really bad memory for names* I didn’t have the foggiest notion who this Alexis person was, especially since the acquaintance who mentioned him couldn’t tell me at which school we had been together. Then Alexis and I met again at another party and ta da! I could totally place him, and it was the beginning of a beautiful friendship, as they say.


Of all curators I’ve met over the years, Alexis is one of the few who has a comprehensive vision about his practice. It is firmly anchored in questioning the existence, meaning and function of the exhibition space itself, without blaming it (Institutional Critique-like) for all the ills of contemporary art. Alexis always has a very fine-tuned approach to the history of the particular space he is going to work with/in, and he deeply questions modes of display, curatorial choices, and all the everyday compromises people working inside the institutions have to deal and content with.
He’s also a very collaborative art worker, co-founder with the lovely Eva Svennung of Toasting Agency, a curating platform that exists as a legal and administrative structure (non-profit like) to set up publications as well as exhibitions, and open to outside projects.
I know, it all sounds very serious, and his work is serious, but Alexis in person is one of the most hilariously funny guy I know in the whole universe, always bursting with ideas, open to lots of suggestions, while remaining elegantly critical of all the brouhaha and white noise that passes for the daily going-ons of the artworld.

He’s always one of the first persons I call when I get back home, however jet-lagged I may be, because I know every one of our coffee breaks or evening drinks encounters will be exhilarating, exciting and mind-blowing. Alexis always encouraged me to get crazy in my writings or my curating projects and he practiced what he preached by publishing some of my most outrageous stuff, something I find a bit masochistic given I’m always 6,000+ words over my limit and 3 months past my deadline. At least.
He’s been a very patient, long-suffering editor who allowed me to find in Pacemaker an outlet for my mad review of a show on porphyry at the Louvre, with an atrocious Latin title.

Not only this but Alexis kept me afloat financially when I was in dire straits, by commissioning translations and essays that probably could have been done cheaper and better elsewhere. In addition to being a great friend, and by this I mean someone who is there for you, doesn’t judge people’s idiosyncrasies (indeed, he encourages those), Alexis is a curator I deeply admire.
I’m rather reactive and instinctive in my curatorial practice myself, whereas Alexis is deeply analytic, but always in a fun way. He’s very good at including avant-garde fashion designers where you don’t expect them, or,say, underground fiction writers. He has worked with his fab’ partner Nadia L. on scenography (and on producing a beautiful offspring, Max) when he co-curated the Voyage Interieur show with Alex Farquharson. When asked to co-curate the IX Baltic Triennial in Vilnius a few years back, he and his co-curators decided to call it Black Market World (BMW), and they really questioned what it meant to be among the umpteenth regularly occurring contemporary art biennials/festivals/events, set in a Baltic state that had just joined the European Union, all of this done in a fun, exciting way.
The catalogue was gorgeous, like most of the publications Alexis has been working on. I love when I run into Alexis and he shows me one of his recent published endeavors. Whatever the format and the content it is always cleverly designed and more often than not uses gorgeous typeface and paper (BTW, you famous, fashionable and ethereal NYC artist who borrowed my copy of Le Voyage Interieur, I want it back. Thanks).

Alexis is a bit obsessed with alternative mode of viewings and display, so with Toasting Agency he curated a show in a driving school. French driving education includes a theoretical exam (yep, we’re French, we like our theory) for which you view slides (maybe they do Powerpoint now?) and write down questions and answers in the dark, something very much akin to traditional art history classes. He’s been preparing a publication in the form of a fashion shoot at Portmeirion, the *Village* in the Prisoner series, and a Luna Park project (I think in Spain). One of Toasting Agency's past show was at a hair salon in Paris, where artists were commissioned to propose “This Month’s Haircut”, and real client were encouraged to try them. Haircuts ranged from commercial logos died and cut on your scalp to Clyde-inspired hairdos (as in Clyde, the Clint Eastwood monkey), or to seat under a real Van Der Graff generator. Fun, fun, fun!

Alexis is not naïve either, and when invited with a bunch of youngish French curators to show in a Big And Unnamed But Very Recognizable Parisian Institution, he thought about it and saw that:

a) it was going to be another pretext for the said institution to pretend to be open and generous when in fact they were just trying to co-opt, swallow and tame rebellion into their fold
b) it was going to be a cacophony of several curators choosing several artists and the thing was never going to look like *a show*
c) I’m sure he also realized they were lots of other super important and interesting issues involved which I am not smart enough to even begin considering.

So Alexis decided to go against the grain by commissioning Mrzyk and Moriceau to do a kilometer-long wall drawing which in effect ended up by not only unifying the entire space (the other curators should have thanked him for this) but by also giving Alexis’ choice prominence in contrast to everything else in the show (and I’m sure they are NOT thanking him for this).

Anyway, I miss Alexis here in LA, where there isn’t much of a critical AND fun discourse going on.
[Typical LA art day: “did you see blah-blah-blah at [insert Chinatown or Culver City gallery here] last week, oh so-and-so have signed up with Blum & Poe, where will you eat after the Hammer opening? Hip Person is opening a new gallery space. Culver City is almost over, oh, but everybody thought so about Chinatown 4 years ago, etc”. Yawn.]

Alexis has been a huge inspiration for many of the things I’ve done, a great friend, and shall I say it again? A very, very patient editor. I cannot resist saying yes each time he asks me to write something, even when I KNOW I will have trouble to find the time (also discounting the many unforeseen instances of "when shit happens" which I seem to attract like Britney Spears the paparazzis. No, I do not know how to spell "paparazzis").
I should kick my own butt when I accept, and I always feel guilty each time, but hey, Alexis there should be a downside for being so cool. Thanks for being so great. You can’t complain if people always agree to work with you. Can’t wait to hear bout your next and new projects, and please send me your corrections, I didn’t check anything, as usual on FBC! Happy Thanksgiving in October! I hope to see you around Christmas time.


* I still do, so please don’t be offended if I look startled when you say hi to me. Please be kind and re-introduce yourself; and if you could be even more generous and retell the circumstances of our acquaintance I will eternally bless your good manners. I am not offended if you don’t remember me either or mispronounce my name, as it happens I mispronounce all non-French names, after all.


Picture above is a drawing my Mrzyk and Moriceau, I don't have the date.
Posted by Frenchy but Chic! at 4:48 PM