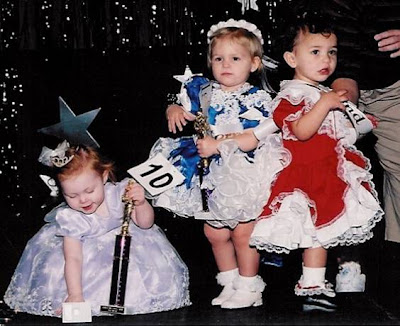 Just read this via artforum homepage. Hhhmm. Remember last week' story?
If Elton John, as stated on his site, asked for the exhibition to close because the show doesn't make sense without the picture removed, I think it's a great gesture. I now respect John much, much more, even though I still don't care for his music.
I'm pasting from the Elton John website here:

The photograph entitled Klara And Edda Belly-Dancing (1998) is one of 149 images comprising the Thanksgiving installation by renowned US photographer Nan Goldin.
"The photograph exists as part of the installation as a whole and has been widely published and exhibited throughout the world.
"It can be found in the monograph of Ms Goldin's works entitled The Devil's Playground (Phaidon, 2003), has been offered for sale at Sotheby's New York in 2002 and 2004, and has previously been exhibited in Houston, London, Madrid, New York, Portugal, Warsaw and Zurich without any objections of which we are aware.
"Elton John is known as one of the world's foremost collectors of photographic art and has several thousand photographs in his collection, including works by Man Ray, Richard Avedon, Irving Penn, Diane Arbus and Ansel Adams.
"Elton John purchased the "Thanksgiving" installation from the White Cube gallery in London in 1999, and the installation is presently on loan to The Baltic Centre For Contemporary Art in Newcastle."

After I saw the title I remembered the picture, and frankly there's nothing to be alarmed about. I think the perversion is in the eye of the beholder, meaning the clueless "concerned management at BALTIC" and the cops called in. I still feel some kind of stinky internal potion concocted by some disgruntled staff. Anyone who has some tips from BALTIC, please post your comments!

Meanwhile, here's above the kind of objectionable kiddie content that should be removed from the universe.
Posted by Frenchy but Chic! at 3:05 PM