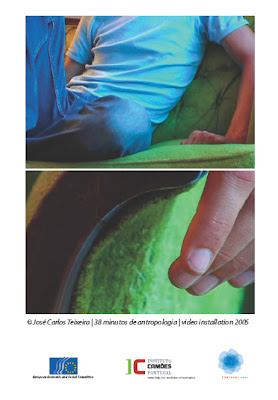 Even though the Belgians don't seem to care for their own country as a concept, to the extent that their king is not called King of Belgium but King of the Belgians, the rest of Europe does! We like Belgium so much that the seat of the European Union is located there. One particularity of the EU is its attempts at democracy (ha!) by rotating its Council Presidency every six months so each of the 27 countries of the Union has a go at presiding. It's not much fun, obviously, but some countries try to take advantage to promote something else than their farm subsidies or their failed attempts at deregulating railway companies.
So does Portugal which for its 6 months presidency is presenting a contemporary art exhibition.

I'm thrilled one of the artists represented is José Carlos Teixeira, an artist who used to live in Los Angeles. I met him last year at the UCLA open studio and really liked his work, which was much more mature than everything else in that batch.
José is a video artist whose work is in part politically oriented (but not always), very well-crafted technically. I wish I could link to one of his video because it is difficult to explain what he does, but if you are in the vicinity of Brussels I can only encourage you to go see his work. José will be in LA in November, and hopefully it will be possible to see his work in town.
If you want to know more about his Brussels show, drop me a line and I'll e-you the press release. Above are stills from one of his work.
Posted by Frenchy but Chic! at 1:42 PM