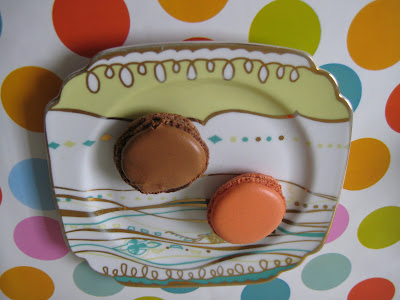 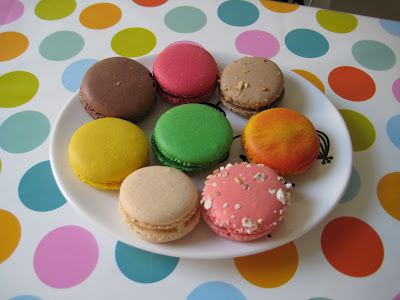 I've been feeling a bit blue lately, largely because of a badass allergy that wouldn't be such a big deal if it didn't give me some horrible headaches, and also because France just lost to La Perfide Albion, a.k.a Les Rosbifs in the Rugby World Cup Semi-Finals. OK, in real life I don't care about rugby really, the guys are too mastodontically beefy for my taste, and I don't understand the rules of the game. The only thing I like about it is how it makes American Football look like a pastime for sissies.

Anyway, to fight the mild seasonal depression I went on an intensive macaron search with my friend Robin. Robin is a macaron convert and her standard so far are the macarons from Pain de Sucre, a great pastry store located on Rue Rambuteau in Paris (behind the Pompidou Center, en route to Yvon Lambert, Perrotin and Marian Goodman galleries). Robin has a very poetic way of describing her food which makes me think she would be a good restaurant critic, and she's very thorough and dedicated in her pastries quest. She has tried ALL of Los Angeles hotels afternoon teas, for example. She's also very thin, and confessed to me she didn't work out so I'd like to borrow her metabolism too.

So Robin and I had an appointment to go try Paulette Macarons in Beverly Hills, which recently opened. I've raved before about my one chocolate macaron from La Maison du Pain, so I wanted to see how Paulette would compare, and try Paulette's different flavors. Plus Paulette is a deliciously retro name, or ringard as we would unflatteringly say in France.
Robin and I previously agreed that Boule was not even in the competing league (dry, dry, dry, with a dusty feel and a bland filling and cloyingly sweet)*. We stopped for Robin to have a late lunch at this La Provence store (located in a BH mini-mall) where we spotted macarons. We chose 1 pistachio and 1 orange. Ewwwww. Bottom of the bottom drawer. They were: doughy, dry-ish, way too sweet and the fillings/flavorings were so artificial the orange one tasted like Tang, really. In passing, Robin said the sandwich and soup were very good, and I had a bite of their very decent baguette, so I guess if you go to La Provence, stick to their savory items and you should be fine.

Anyway, off to Paulette we go, on Charleville at the corner with Beverly Drive. The store looks very clinical, laboratory-like with perfectly round colorful macarons aligned in impeccable rows. The store is not particularly warm or inviting. Two French dudes were speaking loudly in a corner (deux mecs français taillaient une bavette super fort dans un coin). No visible seating, so it's really a to go place, but you don't really want to hang out in a white pill box anyway.
I chose a 8-macarons sampler with: Chocolate, Peach, New Orleans Praline, Dragée, Raspberry, Pistachio, Lemon, Vanilla, all pictured above in the IKEA oval plate.
I was deeply suspicious of two things: the flawlessly rotundity of the cookie, the obviously artificial colors, and the thickness of the macarons.
And I was right to be suspicious, as the cookie part for each and all macarons was too doughy, and above all infuriatingly too sweet. Way too much, as in donut-glazed-sweet, when your gums feel like bathing in a pool of sugar for hours afterward. As with any pastry, when there's too much sugar it tends to overwhelm and flatten any flavor, and I suppose it came out of necessity at Paulette since most flavors tasted either bland or strongly artificial. The chocolate filling was too cakey for example, on the dry side, very bourratif as we say (too filling, in a heartburn-inducing way). Lemon tasted very artificial too, in a strident, cringing loudness that was very disagreeable. The only two macarons that were OK were New Orleans Praline and Dragée, but they tasted almost identical, just plain almond.

I was really disappointed as I was looking forward to a regular macaron source, since my usual pastries purveyor La Maison du Pain don't make macarons on a daily basis, or so I thought. You see Carmen and Josephine are perfectionist and they refuse to sell anything until they consider they are good at baking said item. If I'm lucky I'll walk in on a day when they've been practicing on their macarons skills and I'll get a sample, like a fabulous lemon one recently: the filling was pure lemon curd, and the biscuit part (*biscuit* means cookie in French) was this perfectly fresh and tender slice of ground almond heaven.

This morning was such a lucky day, as a plate of a dozen macarons was eying me seductively on the counter! They had about 6 lemon ones, 1 chocolate (I snatched it! Yay!), a few raspberry and one blackberry which I egotistically snatched too. Carly was desolate they had already sold the last pistachio one as she knows it's my favorite flavor. I took my two little treasures home (pictured incomprehensibly upside-down on the retro, squarish plate above), feeling a bit sad Robin wasn't with me to sample them today. I was a bit apprehensive, in case the chocolate one wasn't going to live up to my memory of the one I had before. I shouldn't even have worried one second about it!
To use Robin's description of what an über-perfect, out of this world, heavenly macaron should be, my chocolate beauty from LMDP was an explosion of a creamy, fresh burst of strong yet smooth chocolate ganache hidden in between 2 layers of the most vulnerable,tender and fresh almond biscuit.
The blackberry one also lived up to my expectations, with a thick and fruity but not too sweet spread in the middle. The best part of the macaron is really that moment when you bite into the cookie and encounter the contrast between the delicate almond biscuit part which is only slightly crunchy and the moist, flavorful filling. Just think about them as you would think about real beauty: it's all inside! If the Paulette ones are flawlessly circular they are also spectacularly bland and boring, without ANY personality. You can look at them but consumption will ultimately prove deceiving, artificial and even disagreeable. Perfect packaging, phony character.
Beware of spectacular beauties gentlemen, and spend some time with us normal-looking ladies, there are huge rewards for you at the end!**

*also, what annoys me about Boule is their desire to look French and use fake French words. You either sell ice cream, or you are a glacier, but not a *glacerie* which doesn't exist in French (or only as an old-fashioned way of designating a glazier shop).
**Plus, I don't want to sound disparaging but most of you on the male side of the species are also very ordinary-looking so why do you waste your time pining for vulgar and unattainable blonde sticks you won't ever get is a complete mystery to me...
Posted by Frenchy but Chic! at 2:15 PM

paulette's macaron are like the owners : to creamy ans sugary.

you should accross the street of Paulette on Beverly Drive and Try
gourmandise paris they have french dragees, marron glacees, calison daix.. etc etc