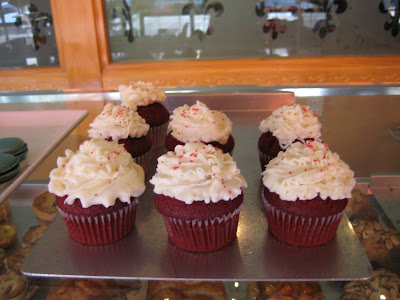 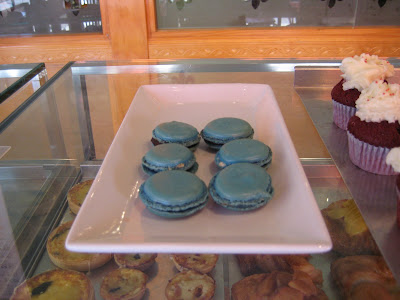 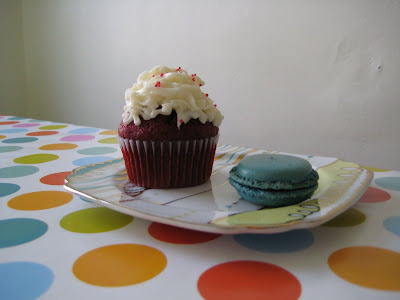 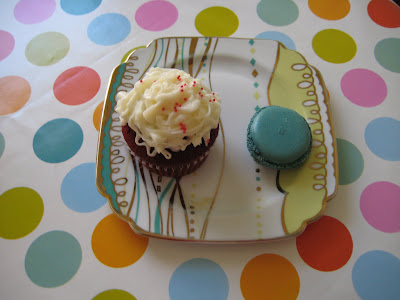 Oh Day of Glory! Gloria In Excelsis Deo! I didn't suspect when I got up this morning I was going to meet heavenly genius before even sunset!
I had just rung Daniel, a.k.a Canada Dry to see if my usual caffeine-addiction enabler was available today to partake in afternoon-ish espresso sipping. Alas, this was not to be. Feeling forlorn and sadly dejected (I like my superlatives and my redundant adjectives, see?) I decided to go instead indulge in my baguette addiction at La Maison du Pain, to have a suitable accompaniment to my French radishes. It always lift my spirit when I get there, as in addition to said baguette habit I also usually gratify myself with pistachio Financiers.

Still unsuspecting of my upcoming encounter with deity, a little bit like Paul Claudel getting a heavy load of God descending on his shoulders behind a pillar of Notre-Dame Cathedral, I spotted one of these great inventions that makes America the land of unbridled patent litigation, a Red Velvet cupcake!
Now I love, love cupcakes, probably more the idea of it than the real thing, since icing is usually a tad too sweet for me. Red Velvet is the most decadent of all cupcakes, what with that great, deep red color contrasting with white icing, like an El Lissiztky embodied in food. Yes, it is artificial and retro, nostalgic of a time of Better Living Through Chemistry. Anyway, I was more than decided to try it, and then right next to it sat a small platter of mini macarons. Blue mini macarons! More Better Living With Chemistry! In an Old World meets New World way. I had to try them - good thing I'm going swimming tonight!

I talked a bit with Carly, who is Carmen's daughter (and therefore Josephine's niece) about macarons, a very French thing if there is one. The macarons craze is a bit over in France right now, which is good in a way (mayo and algae macarons, anyone?) as we can concentrate again on what makes a truly great macaron.
These are very traditional pastries that used to be available only in 2 flavors when I was a kid: nature (just almonds and a very thin layer of some neutral apricot jelly in the middle) or chocolate.
FYI, there are several types of macarons, some of them not the sandwich cookie type, like the macarons de Saint Emilion for example. Other famous ones are from Nancy, where there is a street called "Rue Des Soeurs macarons" (it used to be the address of famous record label/independent music store Les Disques Du Soleil Et De L'Acier).
Anyway, Josephine made the macarons herself, and I a was suitably impressed because these are damn difficult to make. It's basically blanched almond meal very finely ground, sugar and egg whites (no flour for our wheat-adverse friends).
Not only the mixture of sugar and almonds have to be extremely consistent but the baking process itself is delicate, as you can easily screw up an entire batch with all your macarons totally cracked. You can recycle them by mixing them with vanilla ice cream for example, but they are difficult to sell otherwise.

In the present case, these were blue because they were made either for the Dodgers themselves or in honor of a Dodgers post-game party. Carly told me they were going to be available on a more ongoing basis in the future, but for the moment they are an occasional treat at La Maison du Pain.
So suitably equipped with my baguette, my Red Velvet Cupcake and my blue mini-macaron, I came back home determined to have both pastries with my daily stovetop espresso. I must say I totally expedited lunch (and also ditched the bunch of errands I was supposed to run) to taste them.

I made one excruciating bad, stupid mistake: I had the macaron first. Why stupid? because even though the cupcake was the best Red Velvet Cupcake I have ever eaten, light, airy, moist, cocoa-ty, and not over-cloyingly sweet it couldn't match the grandeur of the macaron.
Being French I have eaten more than my fair share of macarons, right? I had the ones from Bagnoles-de-l'Orne, the Saint-Emilion ones, the Ladurée ones, the Pierre Hermé ones, the ones from Pain de Sucre, and those from Sucrécacao (who, incidentally, sell my favorite cake on the planet, pistachio and raspberry).
None of them came even close to Josephine's masterpiece.
Aside from the fun blue color, what made her macaron oh so heaveny perfect was:

1. the size. It was small, and it was fun to try to get 4 bites out of it, which made me appreciate every aspect of the following.
2. texture. The cookie part was very fresh and airy, crunchy without being dry (that's the difficult part: if you let your macarons out for too long (just 2 hours)at room temperature, they turn dry. But if you leave them in the fridge you have to take them out at least 30 minutes before or they get too dense and tasteless.
3. taste of the cookie part (I have to deconstruct it, but it has nothing to do with my Derridean-background). The greatest thing about this macaron was that it wasn't too sweet. Au contraire, the almond taste was very present, with maybe a hint of cocoa, but wasn't drowned on sugar.
4. Finally, the ganache filling. One word. WOW. It was creamy, buttery and chocolaty without being heavy and too rich and once again not too sweet, perfectly complimenting the almond cookie part.

Any negative aspect? Nope, only that it was too good for me to stop eating and take a picture of one the macaron bites for you to see the ganache. I'm sorry because it had this most perfect light brown color, looking closer to butterscotch than he usual brown paste that too many US pastries would like to pass for ganache. But it was impossible to stop eating.

Anyway, hurry, hurry, because at this hour it is likely very few of those remain.
Oh, one last thing: traditional baguette, macaron, and Red Velvet cupcake= about $6,10 (I don't recall post-decimal cents, but that wasn't much).

La Maison du Pain, on Pico and Ridgeley, one block East of Hauser. Now my personal quandary is I need to find a job nearby as I can never, ever, move out of our common neighborhood.
Posted by Frenchy but Chic! at 1:23 PM