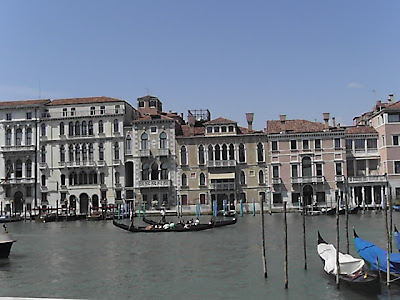 
I am sorry to bitterly disappoint you, but there won't be any Grand Tour post. I've written about half of it and then totally lost interest. So, if it is boring for me, I can't imagine what it could be for you. Instead, je vais aller faire un petit tour today and go see Ruben Ochoa's exhibition and hopefully Michael Queenland at LAXart if it's open pre-reception, and I'll tell you what I think about it.

Tomorrow I'll spend some time on museum collections and will post about it later.
Meanwhile, for my non-art readers who still don't know what the Grand Tour is: think the Cannes festival meets Sundance meets the Academy awards, but in 3 European countries (Venice, Basel and a couple of bleak cities in Germany) over a 2-week period. Lots of glamorous parties too, but hey, it's the artworld so no one is fabulously good looking. But we do have roughly the same amount of navel-gazing, self-absorbed arrogant jerks and moron as in The Industry, so you're not missing out that much. There's the art too and some of it may even be good but there's too much brown noise that interferes with the viewing. So, all in all, BO-RING.
Posted by Frenchy but Chic! at 2:37 PM

Email ThisBlogThis!Share to TwitterShare to FacebookShare to Pinterest
Labels: boring