Some strange similarities between Aaron Young and Ben Morieson 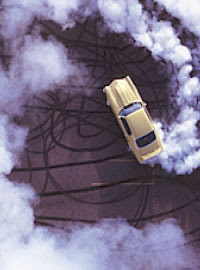 I was scanning the NYT homepage yesterday morning when I ran across this article. I vaguely know of Aaron Young's work, which I've seen on a few occasion. Usually well made, but way too fashionable for my taste, and let's say it frankly, it is very male-macho-let's-try very-hard-to-be-hip kind of work for my taste. It's very alluring and agreeably seducing, deliberately oriented toward a certain age group. Not my cup of tea, but I understand the appeal, though I am usually more interested in long-term potential than instant fashionability.

However, when I saw the picture and read the article it rang a bell. Wasn't there an Australian artist doing exactly the same kind of work a while ago? I remember seeing some videos of it 7 years ago. I may even have met Ben Morieson, I'm not sure about it but he certainly worked with some Aussie artists I like very much, such as Daniius Kesminas.
The difference really is Morieson staged his Burnout performances outdoors and used cars rather than bikes, but really the idea sounds very, very similar to me.

So, dear reader, I was about to ask you to click on the few links I'm providing and ask you if you think there are no strange similarities between Young's performance and the one Morieson staged a few years ago.
But then, contrary to the pioneering spirit of Web 2.0 and websites run by idiots such as this one, my scholarly training got a hold on me. Was I about to accuse some artist of ripping off another without checking my sources? No. I cannot do this, however tempting it would be. You see, as a trained art historian I am supposed to check and double-check and use reliable sources, written documents published by reputable scholars as well as primary sources.

So I checked, and if the NYT article is correct* in stating that Young made his first attempt in the "High Performnce" video dated 2000 then he my have taken precedence to Ben Morieson. Morieson most famous Burnout piece is dated 2001 (and is even in the Guinness Book of World Records).
So chronologically Young would have precedence, but if he did his video while at school I doubt it was widely distributed. So in term of first public appearance, Morieson would be the first one**.

Now, the problem is not that much of artists doing roughly the same kind of work several continents apart. It happens a lot in fact and it mostly display the problem of the spread of information in the artworld.
The problem is more a question of diffusion and of the ignorance and provincialism of US art critics, curators and media alike. Au passage, I tend to find US art critics particularly ignorant when art history is concerned. It's puzzling that people who have such a superficial knowledge can be entrusted in reviewing art for a general audience, no?
I'm not particularly knowledgeable about Australian art myself, but I had memories of Morieson's piece.
Therefore curators responsible for picking up Young's work and helping him stage his performance, or selecting him for the 2006 Whitney Biennial, should have done a bit of homework themselves andtold him about Morieson's work. Which would have allowed for Young to either modify his work (artists should be flexible, right?) or at least address the fact that someone had publicly done the same type of work. Because now, it looks like he has been ripping off Morieson, even if he had made his video a little bit before.

The 2 pictures are from Ben Morieson 2001 Burnout performance. I don't have the correct credit line, so copyright is likely Ben Morieson, 2001.


* because we know how accurate the NYT is in checking its sources...
** I'm trying to contact Morieson to see if he has made some work prior to 2000 that would be the starting point for his Burnout pieces. I'm pretty sure he has, but either way I'll update the post once I know.
Posted by Frenchy but Chic! at 5:43 PM