Your Social Life, At Home And Abroad 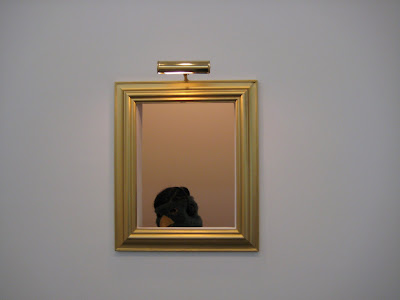 After a lovely lunch with our friendly neighborhood programmer, during which I discovered Sheherazad does have zlabyia for dessert - yay! soooo sweet Aimee couldn't detect the rose water, as it was masked by tons of honey syrup -
I unfortunately had to leave Westwood too fast to really see the Francis Alÿs show. But I did peak at the Jamie Isenstein installation and was lucky to be in when she was performing. She kindly agreed to have her picture taken and to let me publish it on the blog. Here it is! Jamie is giving an artist talk at the Hammer on November 10. Go see her!
So instead of wasting your time hanging out at openings* in the next few weeks, go to the Hammer enjoy art, and there's also an upcoming lecture on Nov. 29 by artist Glenn Ligon.

Who, incidentally has a show at the MUDAM in Luxembourg (did you see this fab' smooth transition? Aren't I a crafty non-native writer, if a chic little Frenchy? Thanks for the applause! really you are too kind). It opens on October 12 so you just have the time to hop on a plane on your way back from the Frieze Art Fair, that is if you decide to skip the upcoming London auctions.

Which you should, because:
- a) you don't want to witness another instance of former-Soviet block mobsters pumping up the prices of undeserving painters (Peter Doig more expensive than Gerhard Richter? Really????)
- b) it's impossible to gastronomically survive more than 3 days in London, gastropubs and Britishified curry joints notwithstanding. But you can bring me back loose tea from Fortnum & Mason, and possibly cookies from Duchy Originals. I live under the delusion Prince Charles himself bakes those with his aristocratic white hands. I know, I know, from a man who needs a valet to lay toothpaste on his toothbrush it is unlikely, but I like this particular delusion.
c) Luxembourg is really an adorable (in real estate parlance: tiny) cute country**. Food is very good there and people are very nice, warm and friendly. They also have a funny-looking Royal Family, much better than the Windsor if you ask me***. They have cool scandals too! (I'll let you dig this one yourself, just for fun)
AND you can also have fun before the opening and go to the Casino-Luxembourg which despite its name isn't a gambling house but an exhibition space where they currently show Wim Delvoye's Cloaca (Hi Enrico!).

After Luxembourg you can have fun going to the FIAC art fair in Paris. Because it is not as exposed as Frieze or Basel, if you are a collector you actually have a good chance to find great pieces by international artists, many of them being represented by French galleries such as Praz-Delavallade, Chantal Crousel or Yvon Lambert. Plus you get to go shopping and to have decent food in Paris (hint: DO NOT RELY ON CHOWHOUND's French Board. It sucks. Ask your friendly French art dealers, curators and critics instead).


On your way back home, what would be better than stopping in Boston? Not only you get to avoid NYC poseurs but you can go to an awesome reception on October 20th at the MIT List Visual Center with two exhibitions featuring mostly video art from the Pamela and Richard Kramlich collection. You will get to mingle with the likes of Daniel Birnbaum (one of the best art critics of the moment), Caroline A. Jones whom I do not know either personally or in writing but whose selection is interesting, and the always awesome Bill Arning! (Hi Bill! Come to LA soon!).

For those of you who are currently in the Midwest, I would like to recommend the Madison Museum of Contemporary Art where the lovely Jane Simon is curator of exhibitions (Hi Jane!Not sure you read the blog). Go visit the museum, and check their website: it's a very dynamic place. It's not far from Chicago where Dominic Molon has just opened his Sympathy For The Devil show at the MCA (Hi Dominic! Hope all went well).

And here at home, opening soon at a museum near you (in a couple of weeks really), Murakami at the Geffen. He's really too overexposed so it will be interesting to see if a large-scale exhibition shows his work to survive the hype. Or not.

Et voilà, your entire social life of the next two weeks laid out before your eyes, no need to even think about it. Merci qui? Merci Frenchy!

*c'est vrai quoi, you could have twice as much fun hanging out somewhere else with the people you truly like, rather than bumping into fresh-faced arrogant art students who can't distinguish Jessica Stockholder from Jason Rhoades.
** Something I always found delightful in Luxembourg: they have underground trash elevators! I kid you not, they put their trash in these cubicles that disappear into the ground and are lifted at street level when the trash collection comes. Awesome!
***No, the funny-attired guy in the middle isn't Grandpa Luxembourg nor Santa, despite being German.
Posted by Frenchy but Chic! at 8:24 PM

Re: auctions - frenchy you seem to be delusional - the auction price has nothing to do with the artist at all.

Re: auctions - frenchy you seem to be delusional - the auction price has nothing to do with the artist at all.