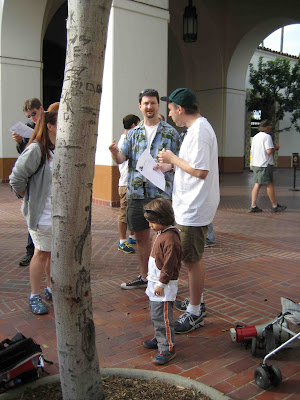 The organizer of the Great LA Walk, Mike, with Eric the Wilshire specialist
Because there are other things in life than the MOCA crisis (more about this to come), and because FBC! knows that physical exercise is a good antidote to sadness, I joined the Great Los Angeles Walk organized by the folks over at Franklin Avenue. The group of 150 people who met at Union Station between 8 and 9 AM on Saturday morning was slated to walk up Cesar Chavez, Sunset Boulevard and then Santa Monica Boulevard all the way to the ocean.
I took the #33 bus at 7.15 AM at the corner of Venice and Vineyard, opposite World on Wheels and Midtown Lane, and was swiftly taken through a nice tour of downtown all the way to Union Station. I saw some nice architecture on the way, so hey, Mike over at Franklin Avenue! You could do Venice next year? I'd even settle for Washington. I could maybe even cheat a join the walk halfway through... 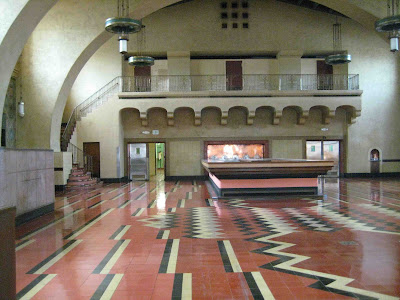 The abandoned old restaurant at Union Station
Being totally out of shape I knew I wouldn't make it till the end, so my more modest goal was to end somewhere between La Brea an Fairfax and then take a couple buses back home.
It was loads of fun! I love walking or taking the bus in Los Angeles and see the architecture, the people, street life and I got to meet some friendly people.
Many of the Saturday walkers work in the entertainment industry, so it was nice to be outside of the art world for a little while. Among the crowd were some serious hikers, all clad in professional gear, some totally out of shape people like me, some marathoners who in fact carried very little, and even a guy who wore PJs bottoms to the walk. I met "Walter" who had walked down Western all the way to San Pedro (it took him 2 days!) and Eric Lynxwiler who wrote a book about Whilshire, which I'm gonna devour the minute Amazon drops it on my doorstep. It was very well organized, we were all given some maps with every mile clearly marked with some indication of the landmark next to it, but it also felt very free and loose, not as if we had been marshaled into a competition or a tourist venture. I liked the vibe! 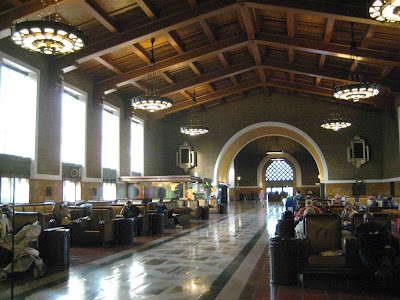 Union Station Waiting Room
It was fun to see what pictures people were taking, some were interested only in street signs and graffiti, some others like your truly in architecture, there were some serious foodies who sampled goodies all the way to the sea. All in all it was clean good fun, and I must say we made pretty good time. I started inadvertently at the head of the pack (they ended up at the Britannia pub in Santa Monica 2 hours before everybody, I gather), and then slowly regressed to the middle, until I reached La Brea and the Target store for a pit stop that proved my demise: I was totally unable to move after that. I stopped somewhere for an immemorable lunch, took a couple of buses back home, where I discovered a ping-pong sized blister on the sole of my left foot. Which explained a lot. I felt a bit sorry I didn't manage to go any further and missed the fun of sharing lunch and later dinner with the others, but clearly I was unfit. I went to bed at 6 PM that evening, got up at 6 AM on Sunday and was so sore I couldn't move whatsoever (hence explaining my absence from the MOCA meeting at the Geffen). 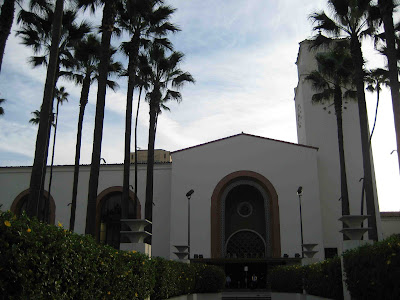 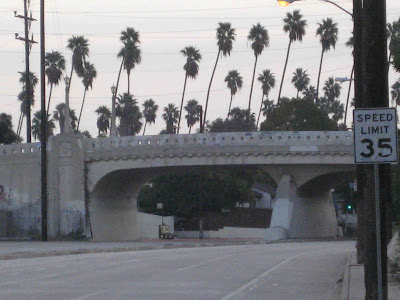 The WPA Bridge over Venice Boulevard, from the #33 bus stop on Venice and Vineyard
So I'm totally ready to do it again next year, but I will train beforehand, and buy adequate hiking/running gear (and that include SOCKS) of the professional kind, not the cheapo stuff my unemployed self got at Target. Meanwhile, you can admire pictures of the walk on the flickr pool
My only regret is, aside from not making it to the Ocean, I was too shy to take pictures of people. Somewhere between Vermont and Western (I think), I saw a beautiful Filipino barber shop that looked out of the 1930s, and later on in Little Armenia a game parlor where retirees were busy socializing. Both were beautiful and I hope someone smarter than me took pictures of them.
If you want to join next year, remember this will be on the Saturday before Thanksgiving. I recommend a bit of training before, and good footwear!

Ah the West Bl bridge, my friend's parents lived in the shadow of that bridge.

To pop or not to pop a blister? Well one time the doctor soaked my blister in betadine. Stains your skin but it is one of the ways to treat it. Hope you get well, thanks for blogging about the walk...