Every Dude’s Guide to Dating at LACMA 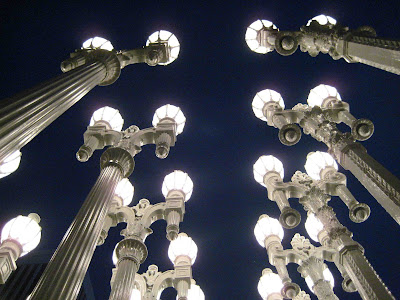 What better place to impress and seduce a woman than at an art museum? -- Society’s treasure trove of excellence, emotion and eroticism. LACMA’s encyclopedic collection of 100,000 artworks from around the globe certainly offers plenty of opportunity for you, the eligible dude, to display your inner-Renaissance man while touring the galleries with your date. Should you require some remedial help, following are a few suggestions on how to put your best foot forward at LACMA with the object-of-your-desire.

Start strong on your date on the first floor of the Ahmanson building. There in the stunning Modern Art galleries you can impress your girl with your knowledge of art AND athleticism. For instance, linger before Magritte’s "Ceci n’est pas une pipe" and say something like: “Eighty years since Breton, this painting takes on greater meaning now, what with our consumer culture’s exploitation of the subliminal messages of images. I couldn’t smoke though if I wanted – considering my triathalon schedule.” In case your date has doubts about the sporty type, go sensitive with Picasso’s "Head of a Woman" from 1909 (78.6) by stating: “Picasso’s analytical cubism - the grand-daddy of so much of our new civic architecture. But I don’t know, deconstructing women? It just seems wrong!”

Underscore your romantic side on the third floor in the impressive Medieval galleries: Staring down at the massive "Tombstone of Alberto Barbiero" (49.23.6), try something like: “Speaking of knights and chivalry, I like to think I’m as progressive as the next guy, but the late 20th century was confusing to many of us. Is it okay that I open the car door for you?”

Where else to establish your intellect and total grasp of current affairs than on the fourth level. Stroll through the world-class Islamic galleries, reflecting on works from Iran, Iraq, Palestine and Afghanistan, then muse: “The situation in the Middle East is so complicated, isn’t it? It will be a challenge for Envoy Ross to engage Tehran, with Iran becoming a nuclear threat supporting Hizbollah, Hamas and Syria, as his two books describe.”

Lastly, take in the American Art galleries in the next building. Americana, mom, apple pie – where else to prove one’s emotional grounding? There you can exclaim: “Wow! This 1857 'Quilt with Buchanan’s Banner and Rose of Sharon Motifs"'(30.1) really reminds me of my Grandma. Every time I pull up that tattered old quilt she made for me, I remember what’s truly important in life.” If that doesn’t seal the deal, then the Byrdcliffe Arts and Crafts desk (AC1993.176.15.1) in the next gallery, will. Looking wounded, pine on: “This desk reminds me of the reason my old girlfriend and I broke up. She criticized me for writing her letters rather than text-messaging. You know, letters? – like with stamps, in the mail, creating anticipation and expressing the writer’s urgent affections in longhand?”

Finish your tour in the Museum Gift Shop. I recommend purchasing a single iconic postcard to remind her of your amazing afternoon together: “Here, I’d like to buy you this. It reminds me of when I was so flustered in the first gallery – in my total lack of preparation, afraid I’d say something lame that put you off.” Touchdown!

[Renee Montgomery sneaked into the museum world when the guards weren’t looking. Despite her long term job at a big L.A. art museum, she preferscollecting road kill to contemporary art. A mother living in the Crenshaw district, she can usually be found cruising with camera on
Southern California freeways in a Joan Didion ecstasy, with country music blaring ont he soundsystem. She graduated from colleges with cows on campus]
Posted by Frenchy but Chic! at 4:32 PM

This is a great reading. Thanks for the post. we have audience that like to read this kind of posts. we will add this to our site. Thanking you. dating website