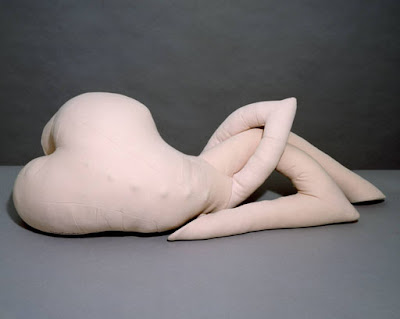 We don't usually spend too much time linking these days, because, frankly, we're busy elsewhere. On Facebook, mainly. (FBC! is also en Twitter, but still doesn't see the point).

But I've just read Barry Schwabsky upcoming article on Dorothea Tanning in The Nation, and I feel like you should all read it. Not only Tanning had a formidably interesting life (she'll turn 100 in April!) but she wrote about it. FBC! was obsessed with Tanning sculptures during the 1990s and has always wondered why why why no one had ever curated a show with them.
I vaguely recall that maybe LACMA is about to organize a retrospective of hers (??? can someone at LACMA confirm or infirm? thanks!) along with a show of another FBC! favorite, Helen Lundeberg.

Another link I'd like to share with you, courtesy of Lauri Firstenberg: Rough Winds, work made by the young LA artist Alex Israel. He's finishing his MFA at USC (I'm sure you can see the influence of Charlie White on the video) and should graduate this Spring. Alex is also one of most passionate person I've ever met when it comes to contemporary art, and an extremely knowledgeable guy as well. How many knowledgeable young artists do you know? I bet it's because he's so well-read that he's also very humble. FBC! ran into him at the Dan Graham/Stephen Kaltenbach/Lee Lozano opening and is super happy that he chose to pursue his career as an artist. Looking forward to seeing more of his work.