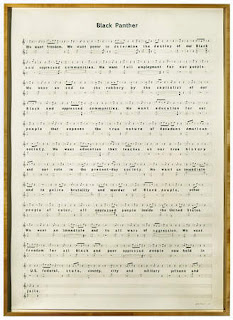 Sorry for the absence of posting last week, and for the lightweight one that's coming up. I'm trying to focus on my other writing and on the preparation of the small show I'm curating in NYC at the end of April (yay!).
That, plus the jetlag when I came back and the unavoidable cold I've gotten this week = not too much focus on what's going on in LA.

The show I've missed going to the opening of was and is still in Torrance, where the programming is very strong, but I wish they'd keep their show up a bit longer.
So, if you're in the vicinity, don't miss What's New Pussycat, a show that mixes Los Angeles greats Ed Ruscha, Larry Bell, Juan Capistran (with one of his renditions of the Pettibon-Black Flag logo), and former LA luminary Bruce Nauman, and many, many other. Please note that next week, Max Presneill will teach a class on "Gonzo curating" on February 5th, which is also World Nutella Day, there's a $10 bucks suggested donation but if you wish to attend the class, I suggest you bring also a jar of Nutella and donate it to the museum staff in appreciation.
This way you can all gonzo-curate while being creative with Nutella.
Please note that February 2nd is the French holiday of La Chandeleur (not the same as Shrove Tuesday, which happens a month later), otherwise known as National Crêpe Holiday, so next week you can happily marry Nutella and crêpes and have a good time AND go to the Torrance museum.

I've also missed the bunch of openings at the PDC last week. I know there's a group show with Chris Lipomi and Michael Rashkow in it at Annie Wharton, that anotheryearinla presents giant cyanotypes by Robyn Hill,  and that Taft Green is also in a group show at See Line Gallery.

OK, it's all very well, but what's happening like, right now?, are you going to ask. Ah, but it's this time of the year again when Los Angeles wants to feel like the art capital of the world and has yet another one of its smallish art fairs, Art Los Angeles Contemporary. It opens tonight and lasts until Sunday. And most of the galleries are the ones you already know in LA, plus a few LA alumni (Jack Hanley, Sarah Gavlak). It costs $40 if you want to attend the gala opening tonight, and $18 if you want to attend just one day. There are a bunch of performances and events organized during the fair, but at times and hours only accessible to people who don't have a job and live on the West Side (ever tried being in Santa Monica at 5 PM on a Friday?). The real Dan Graham, the artist, will be having a conversation with Aaron Wrinkle of the Dan Graham gallery on Saturday, if you're nearby.

On Saturday evening, The Hammer opens its "invitational show", All Of This And Nothing, featuring among others Charles Gaines and Kerry Tribe.

Not opening on Saturday but rather nearing its end is the Hanne Darboven show at Regen Projects, and I believe there is one last music performance at 3 PM. Please phone the gallery for confirmation as I'm not certain about it.

Speaking about music, the CEAIT festival focusing on Greek-French composer Iannis Xenakis is this weekend at Redcat. The tickets are only $25 (and its cheaper for students), so don't miss this event. Yours truly is attending the Sunday performance and rabidly gobbling cold medication as to not contaminate my fellow audience and not cough loudly during the concert.

Speaking of Redcat, FBC! is looking forward to the Aram Moshayedi-curated Geoffrey Farmer exhibition which will start on February 18th, but the official opening is in March.
Mark your calendars because on the same weekend, the long-awaited Ivan Morley show will finally open at Richard Telles gallery, yeah!
I also know that Chris Lipomi, who's currently in a group show at the PDC, is going to have another opening sometimes soon, but I don't know yet where and when.

Email ThisBlogThis!Share to TwitterShare to FacebookShare to Pinterest
Labels: Your Social Life