Your Social Life In The Art City That Never Stops 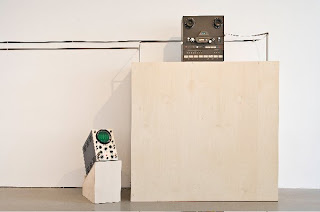 As I'm sure many of you were aware, last weekend saw the opening and going of one of the many LA art fairs, as well as the opening of the "invitational" exhibition at the Hammer, plus a gazillion other events.
Which yours truly didn't attend because I managed to get mightily sick, so I've spent the weekend in bed with a fever, cabin fever and my cat. Plus several boxes of tissues.
So, whoever asks my opinion about the fair: sorry, can't do. I'm sure whatever social high people wants to get were attained, that some of the art was good, most of it meh, and even more terrible, and that fun had been had by all.

You would think that after such a weekend, we'd have a lull, but fear not! More art is to be had this weekend.  But before you get any art, be warned that Saturday, February 5th is World Nutella Day, so get some as a fortifying medicine before going on your art rounds.

You can start the day by visiting the future artists being churned out of the MFA program at the USC Roski School of Fine Art, with their open studios, from 4 PM. In passing , they have a great lecture program, with Trisha Donelly next week, Diederich Diederichsen the week after, Mai-Thu Perret in April, etc.

Then your program would ideally take you to Chinatown where some of my pals are in a show at Tom Jancar, Narratives Of The Perverse II.

In Culver City, LAXart serves as a satellite for the LA Invitational with an opening for Kerry Tribe, one of the most interesting  video artist to come out of our fair city (the show was up this weekend already).  At Blum & Poe,  Julian Hoeber shows in the upstairs space  while at Susanne Vielmetter local  darling Jedediah Cesar shares the space with Austrian superstar Elke Krystufek.

And that's pretty much everything for this week. Have fun, don't drink and drive, and enjoy your art.


Picture above is from Kerry Tribe's current show at LAXart from their website.
Posted by Frenchy but Chic! at 2:05 PM